LAREDO, Texas — In front of a room packed with more than 150 Border Patrol agents, the local chapter of the National Border Patrol Council honored Breitbart Texas and its Managing Director for their work in exposing the realities of law enforcement along America’s southern border.

The honor was announced and accepted earlier this week by Breitbart Texas Managing Director Brandon Darby, who traveled to the border city to meet with Border Patrol agents at the regularly-scheduled meeting of their NBPC Local 2455 union.

“Who here is familiar with Breitbart Texas?” Garza asked, prompting nearly everyone in the room to raise their hands.

Darby shook Garza’s hand as he accepted a plaque honoring his efforts to give Border Patrol agents a voice, when no one else in the media would. 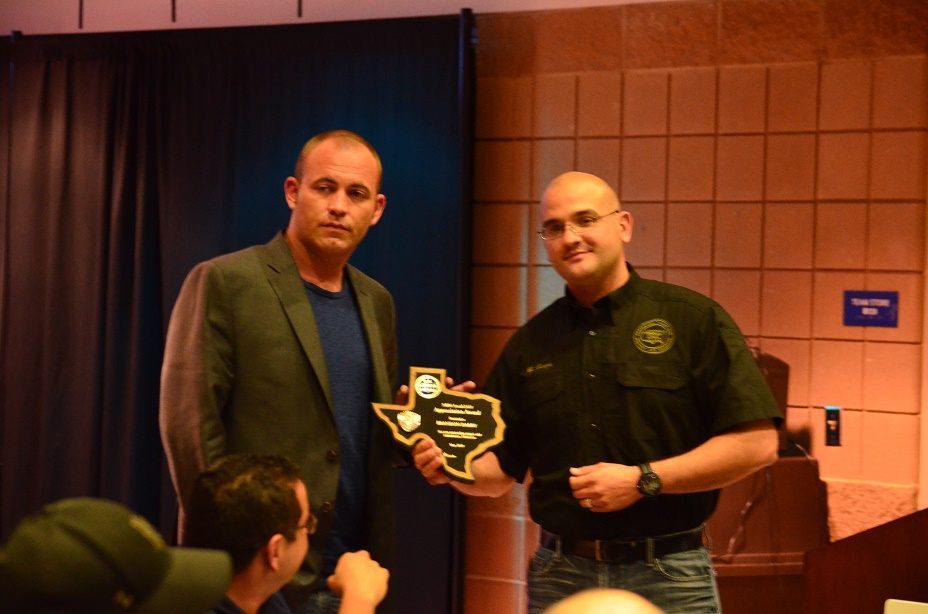 “I feel that you all should be receiving the awards,” Darby said. “You, the men and women in green are the ones out there risking your lives to keep us safe but half of the people in America don’t see that. They see you as the ones that are keeping other people from reaching America and living their dream.”

Garza and Darby then introduced an upcoming podcast, where the Breitbart Texas team and Local 2455 will work together to shed light to many under-reported issues faced along the border, exposing a reality that Washington bureaucrats prefer to conceal from the public.

The Breitbart Texas director spoke with agents briefly about how his news agency has a history of giving a voice to those who don’t, and relishes “fighting bullies.”

Darby discussed the anti-law enforcement perspective held by a large portion of mainstream media, who overlook assaults on agents and knowingly minimize the actions of aggressors – such as the multiple cases of rock-throwing assaults which have put several agents in hospital emergency rooms. On the other hand, the mainstream media is quick to jump on the story when an officer must resort to using lethal force.

“The day will come when, in order to save a life – maybe your own – you will pull a trigger, and they will pull a Ferguson on you.” Darby said, referring to last year’s self-defense shooting by a police officer in Missouri, which was twisted by the mainstream media into a riot-inducing racial crisis. “When that day comes, and they descend on you, I will be there with every resource that our company has to do you right.”

Following the formal meeting the agents gathered around Darby to talk with him about issues they face on a daily basis. Many expressed their appreciation for his efforts over the past several years to work the entire southern border between the United States and Mexico. Darby was very humbled by his reception by these agents and expressed his continuing commitment to tell their stories.