Breitbart Texas traveled to the Mexican States of Tamaulipas and Coahuila to recruit citizen journalists willing to risk their lives and expose the cartels silencing their communities.  The writers would face certain death at the hands of the various cartels that operate in those areas including the Gulf Cartel and Los Zetas if a pseudonym were not used. Breitbart Texas’ Cartel Chronicles are published in both English and in their original Spanish. This article was written by Ciudad Victoria’s “M.A. Navarro” and Breitbart Texas’ Ildefonso Ortiz.

NUEVO LAREDO, Tamaulipas — Mexican authorities have arrested the top Zeta figure in this border city along with three of his personal bodyguards.

On Tuesday, Mexican Federal authorities tracked down and arrested Eleazar “El Chelelo” Medina Riojas, the man who has been identified as the plaza boss for Nuevo Laredo. A plaza is the term used for a region that a particular cartel controls. Nuevo Laredo is one of the top drug trafficking areas controlled by Los Zetas, making Medina Riojas one of the top figures within the overall structure of the cartel. 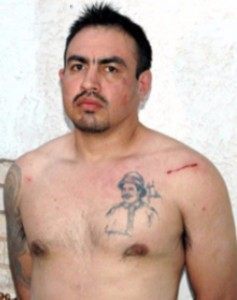 The arrest took place when a convoy of Mexican marines stopped the vehicle that Medina Riojas and his guards were riding in and found four assault rifles, a handgun and a kilogram of cocaine.

The drug lord and his three henchmen are being transported to Mexico City where they will go before the PGR’s organized crime unit for prosecution.

El Chelelo was the top Zeta in charge of Nuevo Laredo since 2003 when he was dispatched by the Gulf Cartel to fight the Sinaloa Cartel and the Beltran Leyva Cartel who at the time had tried to take over the border city. At the time Los Zetas were still part of the Gulf Cartel and acted as the organizations enforcers. Also at the time, the Beltran Leyva cartel was considered part of the Sinaloa Cartel

In 2007 Medina Riojas was captured by Mexican authorities and ended up serving time in the maximum security prison of Puente Grande in Jalisco. Information as to the reason for his release and the date was not readily available; however the cartel leader ended up retaking a leadership role with Los Zetas until his most recent capture.

Medina Riojas also had a history of immigration arrests and deportations in Texas. His first immigration arrest and conviction took place in May 1993 in Laredo followed by a second arrest on December 2004. For his second arrest in the U.S., Medina RIojas was sentenced to 145 days in jail in April 2004 and was subsequently deported.