The expression “Gone to Texas,” an 1800’s colloquialism popularized to mean pulling up stakes for a fresh start in life, lived up to its reputation when the U.S. Census Bureau released its latest population estimates. Nearly half a million people relocated in the Lone Star State in just one year, more than in any other state in the nation.

On March 24, the U.S. Census Bureau released statistics that tracked the state’s explosive population growth. Four Texas metro areas added more people in the one year period from  July 1, 2014 to July 1, 2015 than in any other state in the nation except for Texas as a whole, which gained approximately 490,000 new residents.

Topping the list, the Houston-The Woodlands-Sugarland metropolitan area experienced the greatest population increase during this period, adding about 159,000 residents. Following closely was the Dallas-Fort Worth-Arlington metroplex, with 145,000 new people. Both of these Texas metro areas showed the largest gains nationwide. Neighboring Austin-Round Rock and San Antonio-New Braunfels ranked among the 16 regions to gain 50,000 or more people over the one year period. The Census Bureau cited these four areas alone as adding about 412,000 people. 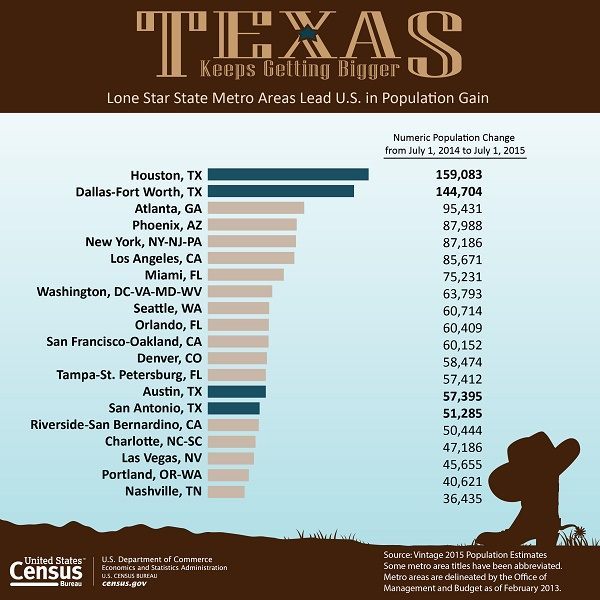 The U.S. Census Bureau data reflected population statistics for 381 metropolitan and 536 micropolitan areas plus 3,142 counties natiownwide. Overall, U.S. city centers contained 275.3 million people, up an estimated 2.5 million from the 2014 to 2015 period. The bureau also estimated four of the nation’s 20 fastest-growing metro areas were in the mountain states of Colorado and Utah. Three California metros added more than 50,000 people during the time period – Los Angeles-Long Beach-Anaheim, San Francisco-Oakland-Hayward, and Riverside-San Bernardino-Ontario. Los Angeles remained the nation’s most populous county with 10.2 million people by July 1, 2015.

The Census Bureau plans to release 2015 population estimates of cities and towns, as well as national, state and demographic estimates by age, sex, race and Hispanic origin, in the coming months.

In 2015, Breitbart Texas reported Texas Population Projections 2010 to 2050 predicted the number of residents in the state could double by 2050 if current migration patterns continue at the same pace seen over 2000 to 2010. The Office of the State Demographer anticipated that over the next 40-plus years Texas could see its 14-and-under population nearly double from 5.7 million in 2010 to 10.2 million in 2050. The 15-64 demographic could potentially swell from 16.8 million to 347 million, and its older 65-and-over population could well jump from 2.6 million to 9.4 million. If this happens, Texas would house 54.4 million, based on immigration and people moving from other U.S. states.

Also contributing to Texas’ explosive growth is the state’s business-friendly climate. Between 2008 and 2014, California corporations accounted for 15 percent or 219 of companies that moved their headquarters or expanded their operations (i.e., a call center or distribution center) somewhere in the state, the Dallas Morning News reported. The trend of California companies “gone to Texas” continues with McKesson and Pegasus Foods, the latest to relocate or expand into North Texas, joining California transplants Toyota, Liberty Mutual, Kubota, JP Morgan Chase, State Farm, Farmer Brothers and Raytheon, and many more notes the Dallas Business Journal. In 2015, Texas placed second on the Fortune 500 list, with 54 companies, edging out California, which had 53. New York came in first.