U.S. Border Patrol agents are once again sounding the alarm about miles of border being left wide open and unsecured. Breitbart Texas exclusively obtained a document showing a Havre Sector Border Patrol manager knowingly issuing orders to leave 40 miles of Montana border open and unpatrolled. Obama holdovers in the Customs and Border Protection (CBP) agency are continuing with the same careless disregard in the Trump Administration that they did under former President Obama, according to Border Patrol agents.

Breitbart Texas has the specific order that was given to the agents signed by the Obama-holdover manager. The order demands that agents on the northern border stay within one assigned zone and are not to leave that zone to patrol other zones that the agents have historically patrolled — even though there are no agents assigned to patrol the other zones. The Havre Sector has six Border Patrol stations and the order applies to one of these stations consisting of six zones. A total of 60 linear miles are covered by the one Border Patrol station in question, yet agents say that this only allows them to patrol 20 of the 60 miles of border.

When Breitbart Texas asked multiple Border Patrol agents about motives for the manager leaving such a vast swath of border unpatrolled, the agents felt that it was twofold; they blamed previous Obama-era policies and they also believed that widespread corruption exists within the Havre Sector’s upper-management.

One of the Border Patrol agents who was present when the manager gave the order spoke to Breitbart Texas on the condition of anonymity and said, “Criminal cartels exploit our weaknesses on a daily basis and they’re certainly going to exploit such a large area of open and unpatrolled border.” Another agent from the station told us on the same condition, “From a border security standpoint, this directive makes no sense, but there has to be a reason so I don’t think it’s a far stretch to conclude it’s due to corruption.” And yet another agent from the station speaking to us on the same condition said, “This order has to be coming from the Sector Chief and Deputy Chief Patrol Agents. They, along with the Station’s Patrol Agent in Charge and Deputy Patrol Agent in Charge, need to be immediately reassigned until a full and thorough investigation can be done into this order.”

Border Patrol Agent Brandon Judd, President of the National Border Patrol Council (NBPC) was appalled when he heard of this incident from agents — thereby confirming to Breitbart Texas the authenticity of the other agents’ concerns. He told Breitbart Texas that there have been more complaints filed out of the Havre sector than any other sector within recent years. Unfortunately, he says the agency has justified all of the manager’s actions. Agent Judd said anytime you have managers investigating other managers, the result is always “no cause of wrong doing found.”

Agent Judd said there must be accountability from the top down. “I believe Secretary Kelly’s constant praise of former Secretary Jeh Johnson is an endorsement of his open border policies. There are so many good managers in the Border Patrol, but when Secretary Kelly condones his predecessors failures, he opens the door for the bad managers to act like this and bring shame on the entire organization.” Agent Judd continued, “President Trump is the president of the common citizen and the choice of the rank-and-file Border Patrol Agents; unfortunately there are those highly paid career managers who want to believe they’re above everyone else — up to and including the President of the United States.”

Agent Judd said the rank-and-file Border Patrol agents have spoken with the managers at the station in question until they were blue in the face — all to no avail.  “Managers who sit behind a desk and never patrol the border should never dictate operations and policy, otherwise this is what you get.”

Multiple Border Patrol agents who were present for the manager’s order to leave 40 miles of border open spoke with Breitbart Texas. They said that all Border Patrol agents who were present argued with the manager and informed him they felt the order was “illegal and was dereliction of duty.”  They even argued it was contrary to the President Trump’s express wishes as set forth in the Border Security Executive Order. The agents asked for the rationale behind the order, but the manager refused to provide one, according to them.

Breitbart Texas showed the handwritten and signed order we obtained to Agent Judd, and he confirmed that agents were, in fact, given this order. He pointed to the manager’s signature on the order as authentic. We provide the leaked document below. The names have been redacted to avoid any chance of revealing the exact station in the Havre Sector. 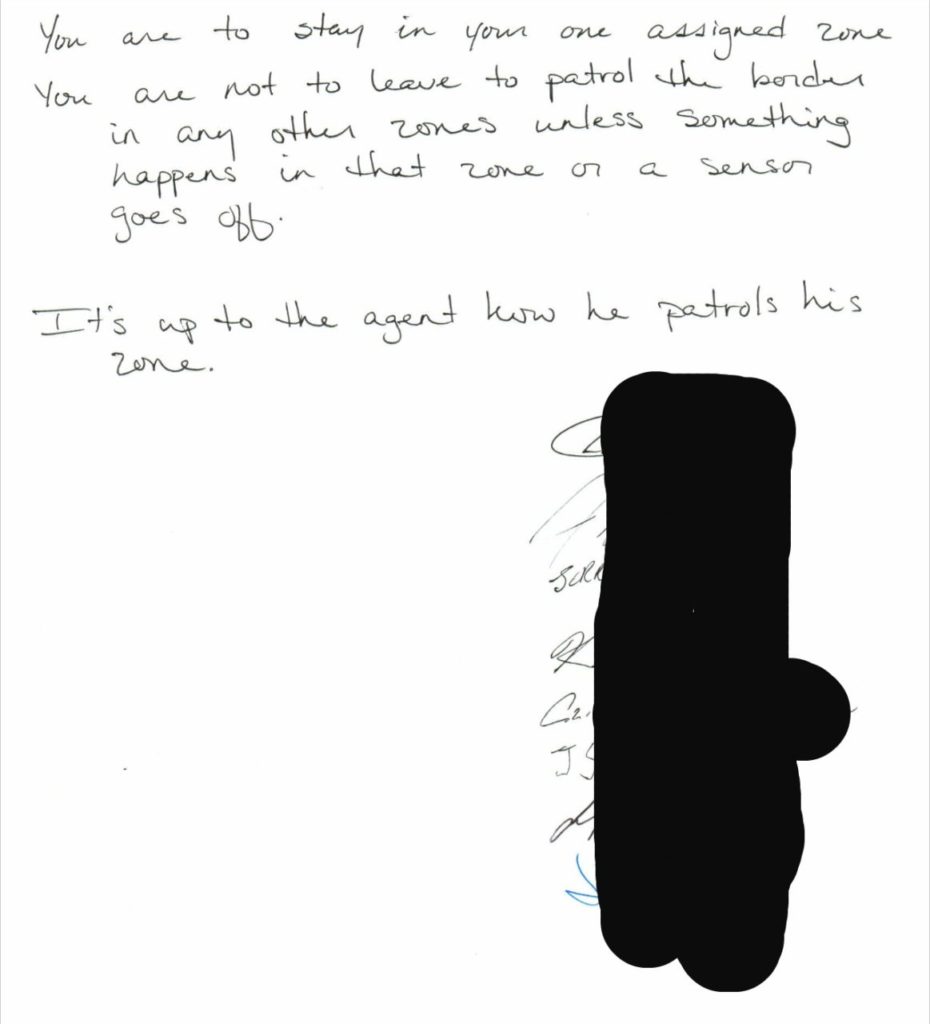 Listen to Agent Judd discuss this article on Breitbart News Daily on SiriusXM: