U.S. Immigration and Customs Enforcement (ICE) Enforcement and Removal Operations (ERO) officers picked up 650 illegal aliens that came to the country as Unaccompanied Alien Children (UACs) and Family Unit Aliens (FMUA). Operation Border Guardian/Border Resolve is a response to the surge of families and UACs that illegally entered during the Obama administration.

ERO officers made the arrests between July 23 and 26.

In June 2014, Breitbart Texas’ Editor-in-Chief Brandon Darby obtained leaked internal federal government photos showing UACs as young as 12 years old crammed in U.S. Border Patrol processing centers because of the swell of migrants crossing. In November 2015, officials placed 81,000 children in homes across the U.S. Most of these minors came from Central America. Many came here after their family members paid cartel-connected smugglers. The chart below shows the dramatic surge of alien apprehensions at the border in the summer of 2014 (yellow line in graph). 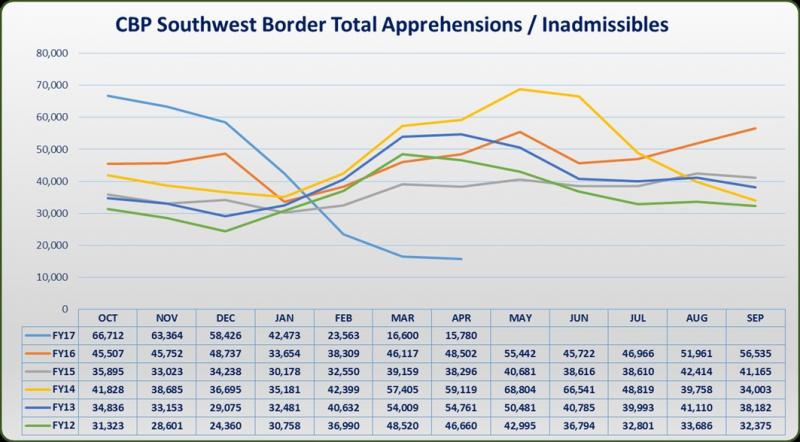 The numbers that fall were at the highest levels of the previous six years. A year later, Breitbart Texas reported on the massive surge in the number of UACs and FMUAs illegally crossing the border once again. Breitbart Texas coverage also reported information about how callous coyotes leave their human cargo without water or food in smoldering weather and even without ventilation. They also rape women and young girls in their “care.”

The UACs targeted in ICE’s most recent operation were 18-years-old, or at least 16-years-old with criminal histories and/or suspected gang ties.

The notoriously hyper-violent MS-13 and other international gangs target young illegal aliens and recruit them into membership.

Breitbart Texas reported earlier this week that ICE officials confirmed that the MS-13 illegal alien arrested last weekend in Virginia for two murders in Houston entered as a UAC. Border Patrol agents released him under President Obama’s catch-and-release program. He failed to appear for a removal hearing.

Breitbart Texas reported in June that an official with the Federal Bureau of Investigation (FBI) told the House Homeland Security Committee Subcommittee on Counterterrorism and Intelligence that “MS-13 is not the largest street gang in the United States; it is increasingly the most violent and well-organized.” He added, the gang had a “propensity for gruesome violence.” The leadership of the gang is based in the Central American countries of El Salvador and Honduras.

As reported by Breitbart Texas, the rise of MS-13 gang violence has dramatically impacted crime in the nation’s fourth-largest city, Houston. The State of Texas considers the gang to be a Tier 1-level threat – the “most significant” threat level.

In April, Texas Governor Greg Abbott announced the creation of an Anti-Gang Task Force to target these criminal alien gang members. Houston is one of the five cities that the FBI has previously identified to have a large MS-13 presence.

During that press conference, Abbott and Texas Department of Public Safety Director Steve McCraw responded to a Breitbart Texas question about the connection between MS-13 and the surge of UACs from Central America that began in 2014. “Some of the MS-13 gang members are here illegally,” Abbott said. “Some of them did come here as unaccompanied children.” McCraw went further, explaining, “MS-13 will press children as young as 13 into the gangs in El Salvador.” He said a high percentage of the MS-13 gang members are illegal aliens.

One hundred thirty of the 650 apprehended during Operation Border Guardian/Border Resolve last week had criminal convictions. The records include sexual assault, driving under the influence (DUI), assault and battery, domestic violence, and drug possession. A statement obtained from ICE by Breitbart Texas said this is not an exhaustive list of the crimes committed by these criminal aliens.

Seventy-three of those arrested were members of family units, and 120 of them came into the country illegally as UACs. Officers also arrested 457 other individuals confronted during the operation.

The illegal aliens apprehended during the four-day operation all had a final order of removal issued by a federal immigration judge. They also had no motions or appeals pending in their case.

“Illegally entering the United States as a family unit or UAC does not protect individuals from being subject to the immigration laws of this country,” ICE Acting Director Thomas Homan said in a written statement. “I urge anyone considering making the dangerous and unlawful journey to the United States: Please do not take the risk. Ultimately, if you have no basis to remain in the United States, you will be identified, apprehended and returned to your home country.”

ICE works with partners in Mexico and Central America to target illegal immigration and the cartels that profit from human smuggling.

Operation Border Guardian/Border Resolve is ongoing, and large raids were conducted in January and February 2016.