Fayette County Sheriff Keith Korenek reported that two members of his drug interdiction team made traffic stops on consecutive days resulting in the seizure of large quantities of cocaine being trafficked along the I-10 corridor. The two seizures occurred within two miles of each other near the town of Flatonia, Texas, according to a statement provided to Breitbart Texas by the sheriff’s office. 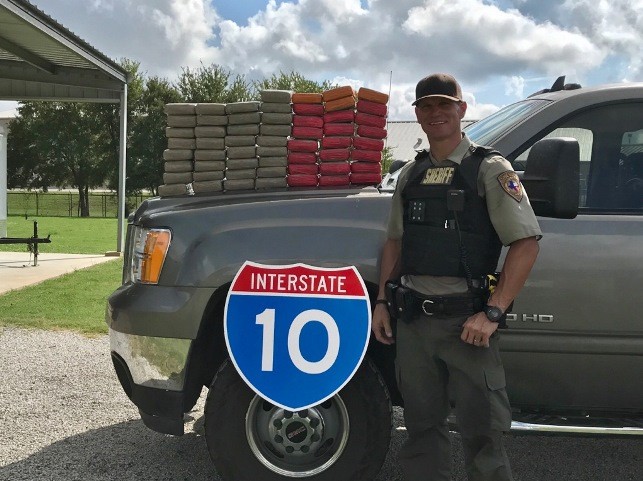 Sheriff’s Investigator David Smith stopped a Chevy cab truck on Monday morning near mile marker 660. While speaking with the truck’s driver, Smith noticed several discrepancies in the man’s story. The investigator obtained permission to search the truck. During his search of the vehicle, Smith discovered 67 kilos of cocaine. He found the drugs hidden under the rear seat of the vehicle.

Smith placed the driver, 66-year-old Mauro Bustamante, under arrest and transported him to the county jail for processing. He seized the drugs — which he estimated the value to be $6.7 million — and the truck.

The following afternoon, Sergeant Randy Thumann and his K-9 partner Lobos stopped a Jeep Liberty just two miles from the previous day’s drug seizure. Thumann made contact with the driver of the Jeep Liberty and asked about his travel itinerary. After speaking with the man he later identified as Sergio Gonzalez, a Mexican national, Thumann became suspicious that he may be trafficking narcotics. He obtained permission to search the vehicle from Gonzalez and deployed his partner, Lobos, to conduct a cursory search.

Lobos alerted to the presence of drugs leading Thuman to the discovery of 41 kilos of cocaine. The drugs were stashed in aftermarket compartments in the Jeep. The deputy placed Gonzalez under arrest and transported him to the county jail. He also seized the Jeep Liberty and the estimated $4.1 million worth of cocaine.