ONALASKA, POLK COUNTY, Texas — Volunteer rescue crews moved quickly to extricate a high school student who became trapped when a tree cut his home in half as a deadly tornado moved through the county. By morning, Polk County officials reported three deaths, dozens of injuries, and the destruction of entire neighborhoods.

Breitbart Texas arrived on the scene of one impacted area as a team of volunteer firefighters began rescues in a nearby rural community. Exclusive video depicts firefighters successfully removing a local high school student by cutting the floor of a home to reach the pinned teen. A large tree fell on the structure which prevented his escape.

One of the rescuers told Breitbart that a large pine tree fell during the tornado, cutting the mobile home in half. The teenage boy became pinned as he fell and the tree landed on his feet and ankles. Rather than risk further injury by cutting the tree, the rescuers cut a hole from under the home freeing his feet and legs. 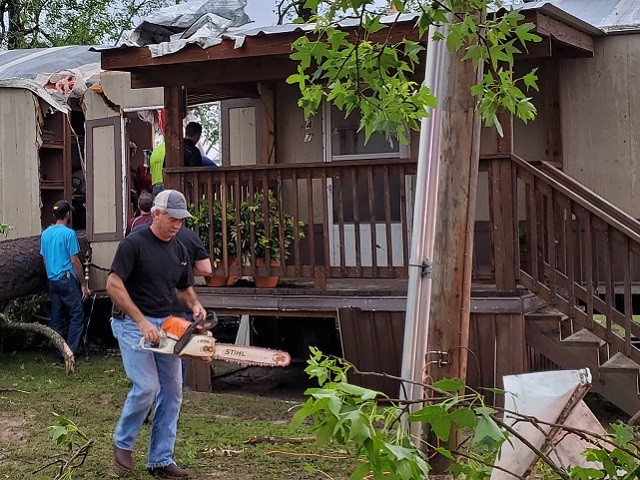 Onalaska Volunteer Fire Department rescuers work to cut away the flooring where a tree fell on a tornado victim. (Photo: Bob Price/Breitbart Texas)

Witnesses to the rescue could be heard clapping as workers announced they freed the young man. Awaiting paramedics transported the teenager to an awaiting ambulance and then to a triage center.

A short time later, Memorial Herman Hospital from Houston dispatched four LifeFlight helicopter aircrews to the area to help with badly injured victims. By sunset, at least one helicopter airlifted a victim to Houston for emergency medical care. 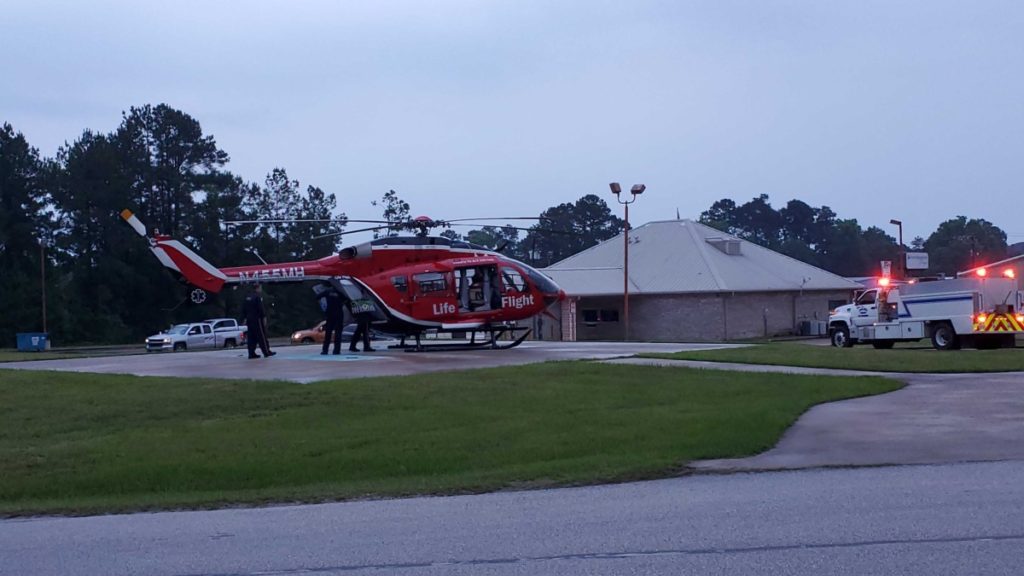 Officials tell Breitbart Texas that there are other injuries in the immediate area, but a full accounting is not yet available. Onalaska Volunteer Fire Department Chief J.C. Stutts said the number of injured ranges between 35 and 40. Authorities believe the twister registered as an F-4 in intensity, yielding up to 260 mph wind speeds. Medical helicopter crews are currently serving the impacted residents.

The Tornado Watch has been modified and will continue in effect through midnight tonight. Please continue to monitor the weather and Be Prepared to act quickly. #txwx #houwx #bcswx pic.twitter.com/CAt5r2ZKdr

Throughout the evening hours, rescuers worked frantically to free people who had been trapped in their homes during the devastation of the tornado.

Hours later, local and county law enforcement officers and deputies, firefighters, paramedics, ambulance workers, emergency management crews, and rescue volunteers continued to pour into the area where dozens of homes are reported to be destroyed.

Polk County Emergency Management officials reported that the tornado left at least three people dead and destroyed homes in multiple neighborhoods on the north side of Onalaska.