Armed Texans placed themselves at the Alamo Cenotaph Saturday afternoon in advance of George Floyd protests in San Antonio, Texas.

Protesters defaced the monument early Friday with downward-facing arrows placed next to the statements “white supremacy,” “profit over People” and “the ALAMO,” according to an article by the San Antonio Express-News.

Texans consider the Cenotaph sacred because it is a memorial to those who died fighting at the Alamo.

“Well, it’s all pretty simple.  If you’re mad that George Floyd got murdered, well good. So am I,” David Ahmad with Open Carry Texas said in a video posted on Facebook. “If you want to respond to that by burning Target, or a drug store, or looting a liquor store, or destroying the Alamo, you can kiss both sides of my ass. We’re going to put a stop to you.” He was very clear that some of those there would use “any means necessary” to put a stop to it.

“So, just do it right. Protest the man’s death because it should be protested. Things need to change. This bullshit’s got to stop.”

He warned protestors not to use Floyd’s death to “tear up the Alamo or tear up a restaurant,” or use it as an excuse to burn or steal.

“This Is Texas Freedom Force,” warned that “the Brown Berets and Black Lives Matter” would be rallying at a park close to the Alamo. The nonprofit organization describes its mission as “Protectors Of All Things Texas.” 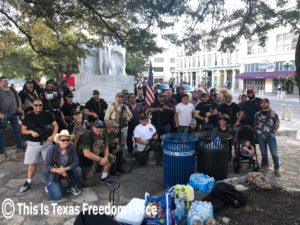 The group posted on Facebook: “Given the incident that took place Thursday night (Cenotaph Vandalized) and the fact that PD did not protect that site, it is up to Texans to watch over our most valuable historical monument and ensure its safety.”

A self-identified Second Amendment advocate who is a pastor and college instructor said he was there to support those armed and ready to protect the Cenotaph. He explained that the memorial had been defaced less than 48 hours ago.

“They are showing up here to do what they have been doing for a long time. For months. And that’s protecting this place. For years for that matter.” He said they were standing up for what’s right.” He then invoked the names of Walter Scott of South Carolina, Ahmaud Arbery in Georgia, and George Floyd of Minneapolis.

“To make sure that 184 years ago when our true patriots were fighting to protect the Alamo, that I too can stand and let them know that it’s worth fighting for.”

When asked about the “white supremacy” graffiti, he answered, “It’s saddening because they obviously don’t know the history of what has taken place.” He explained that 200 men fought for 13 days.

“That was not just for white people. Or Hispanics. It was for Americans. That was the point whereby we still call the ‘rally cry.’  That rally cry is ‘Remember the Alamo.’ That rally cry is something that has affected me as an African American, as a black man in American, because that rally cry led toward the freedom for all of us.”

Some said the group was not really concerned about any damage being done at the Alamo.

What in the white bullshit is this. That battle already happened in 1836! Ain’t nobody tryna take over the Alamo rn pic.twitter.com/RgD8kKgkmQ

Officers arrived at the Alamo Plaza dressed in riot and protective gear. They had batons and zip ties, and a few had shields, reported the San Antonio Express-News.

Decent amount of riot cops showing up. Thankfully Still no sign of any violence. #SanAntonioprotest pic.twitter.com/S1vMELh6cl

Police have made a wall separating the marchers from the counter protesters in front of the Alamo pic.twitter.com/JXfx1P2TY1

One found it “interesting that the police are protecting the ARMED protestors….But yes, let’s still deny white privilege.”

I find it interesting that the police are protecting the ARMED protestors….But yes, let’s still deny white privilege.#BlackLivesMatter #SanAntonioprotest https://t.co/ttGdHdQhPn

Nobody better fck with The Alamo! Enough is enough! #SanAntonioprotest https://t.co/MEsCfXOKOZ

Thousands were walking the streets of San Antonio.

Video of the rally shows that the protestors marched through the downtown streets fairly peacefully during daylight hours.

There were heated speeches urging “separation.”

The Most Beautiful Speech givin I’ve heard from another human in years thank y’all for opening the communities eyes the realest way possible.. #BLACKLIVESMATTER #SanAntonioprotest TO EVERYONE THERE RIGHT NOW PLEASE BE SAFE GETTING HOME ITS NOT SAFE NO MORE… ONE LOVE I LOVE YALL pic.twitter.com/h2875ySS64

Law enforcement officers formed a line in front of the Alamo.  Protestors were throwing water bottles.

Police moving in to form a line in front of Alamo, water bottles starting to fly. #SanAntonioprotest #BlackLivesMatter pic.twitter.com/Rd33MxdT2X

San Antonio had an organized and peaceful protest until about 6:30-7:00pm which when it concluded. After that, whatever happened was not intended for today and happened on individual accords. I had an amazing time and felt so much power thank you SA! #SanAntonioprotest

This was not needed. I understand the anger but this was peaceful until this shit started. All those filming need to show the ones antagonizing and breaking into shit.#SanAntonioprotest https://t.co/CtcZgMhvli

San Anto, you’re breaking my heart. This is not what it was about this afternoon. Anything that came up was shut down. Now this. #SanAntonioprotest https://t.co/IU9l3KzhDw

STOP FUCKING UP DOWNTOWN!!! AND GET OUT OF THERE THEY ARE THROWING TEAR GAS #SanAntonioprotest

BREAKING: Can anyone identify this person? They have appeared in multiple videos, they are armed, and they appear to be instigating violence. If you know anything, DM IMMEDIATELY.#SanAntonioProtest pic.twitter.com/GhLRXze2nD

THEY GASSED US FOR WHAT ???? look how Far they are , Protected by their guns. They were not in any danger by us but they still gassed us #SanAntonioprotest pic.twitter.com/axv2ObCiWp

Breitbart Texas spoke with Brandon Burkhart of This is Texas Freedom Force after the Alamo Plaza was shut down by law enforcement forces. He said his men had to form a line in front of the Alamo Chapel because protesters were threatening to breach the barriers. “Things kept escalating and it got to the point where they asked the Alamo Rangers to call the riot police.”

Burkhard reported that there was no additional damage done to the Cenotaph, and no damage was done to the Alamo.  They will continue to “have their eyes on the Alamo.”