A young North Carolina woman has taken a stand against the Confederate flag and called it “inherently racist.”

On Wednesday, Alexa Rice uploaded a video to Twitter of herself removing a Confederate flag sticker off of a neighbor’s truck.

She claims she was riding her bike home from work when she noticed the truck with the sticker, and, after realizing how angry it made her, came back later to remove the sticker. 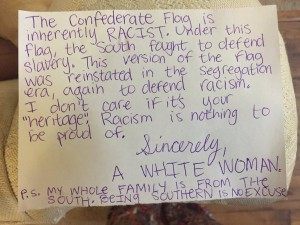 The note, which has since been removed, reads:

“The Confederate flag is inherently racist. Under this flag, the South fought to defend slavery. This version of the flag was reinstated in the segregation era, again to defend racism. I don’t care if it’s your “heritage,” racism is nothing to be proud of. “