Many Central American parents who were detained separately from their children during the April-to-June zero-tolerance program are leaving up to 500 children and youths in the United States, according to federal data.

An additional 2,104 migrant children and youths have been reunited with their migrant parents, according to the data recently provided to a judge by the Department of Health and Human Services. But many of their parents may choose to leave some of the 1,2014 children and youths in the United States when judges eject the parents’ asylum pleas.

“There’s a lot of people from Central America who are willing to leave their kids here, rather than take them back,” said Mark Krikorian, the director of the Center for Immigration Studies. He continued:

Especially if there is relative here [in the United States], or if the child is close to 18 and can get a job and send the money home, it makes perfect sense.

It does not mean in every instance that the illegal migrant knew what they are doing and planned to drop their kids off, but it does add some nuance to the sob stories that the media has been retailing.

The high percentage of children deliberately left by their parents contradicts the media’s anguished narrative that the children were cruelly “ripped” from their uncomprehending parents’ arms.

Instead, the data reinforces the abundant evidence that journalists do not want to recognize how poor Central American migrants are rationally exploiting the United State’s asylum system to win green cards and education for their children.

Many wealthy foreign parents, including many Chinese and Russians, use a different strategy to win citizenship for their foreign children. They fly into the United States long enough to give birth on American soil and to pick up their child’s new Social Security Numbers.

The number of abandoned Central American children will likely rise as U.S. immigration courts order the deportation of the remaining 2,o00 migrant parents who were released and reunited with their 2,104 children. Since their release, the 2,000 parents and their 2,104 children are allowed to live and work in the United States until a judge decide their pleas for asylum, likely in 2020 or 2021.

Data from prior years suggest that few of the migrants’ pleas for asylum will be approved by a judge and that most will be ordered home. But the available data also suggest that most migrants skip their final hearing to dodge deportation by the Department of Homeland Security.

“Most of the kids and parents are probably here to stay, and that’s what they and the smugglers and the anti-border activists are counting on,” Krikorian said. “How much effort is ICE going to put into picking up some 12-year-old whose asylum claim has been turned down?”

Trump canceled the zero-tolerance enforcement program in June amid an outpouring of emotional complaints from pro-migration media personalities, pro-migration activists, and from Democratic politicians. The enforcement program was portrayed as a cruel “family separation” program, even though the 2015 Flores judicial agreement approved by President Barack Obama requires that children be housed separately when their parents are detained for longer than 20 days.

Trump announced a new strategy on November 1 to block the growing number of Central American migrants who make asylum requests to help walk past the border guards and into U.S. jobs.

The new plan will use tent cities to detain migrants and their children until their asylum pleas are resolved in as little as 40 days. The plan also replaces the Flores court decision with a new regulation allowing detention of children — with their parents — for more than 20 days.

The plan was praised by Krikorian. ‘They should not be releasing anyone who applies for asylum in the first place … The goal should be that every asylum applicant is held during the entire course of the proceedings,” he said, but added that pro-migration groups will likely get friendly judges to block the plan.

The HHS data sheet shows that 2,104 children have been released from the agency’s Office of Refugee Resettlement and then reunited with their migrant parents prior to court hearings.

The HHS data also shows that the group of roughly 500 abandoned children and youths is comprised of:

One hundred and eighteen children who have been left in government care by their parents since the parents’ deportation, according to a count by the Ameican Civil Liberties Union.

Forty-three additional children remain in government care “because further review shows they were not separated from parents by DHS.”

Thirty-three additional children are “in [government] care where a final determination has been made they cannot be reunified because the parent is unfit or presents a danger to the child.”

Thirty-three children are in government care while the parents are outside the United States.

Another 14 children have parents in the United States but have not been reunited with their parents, for reasons that are unexplained by HHS.

Three hundred children have been released from HHS because they have become adults who can file for asylum themselves, or because they are being sheltered by other people, mostly the relatives of the migrants. The released children and youths are free to work in Americans’ workplaces and to use Americans’ schools. Some of those children and youths may be living close to or with their released parents prior to their asylum hearings.

If the 300 are excluded from the overall tally, the number of left-behind children remains at 200. 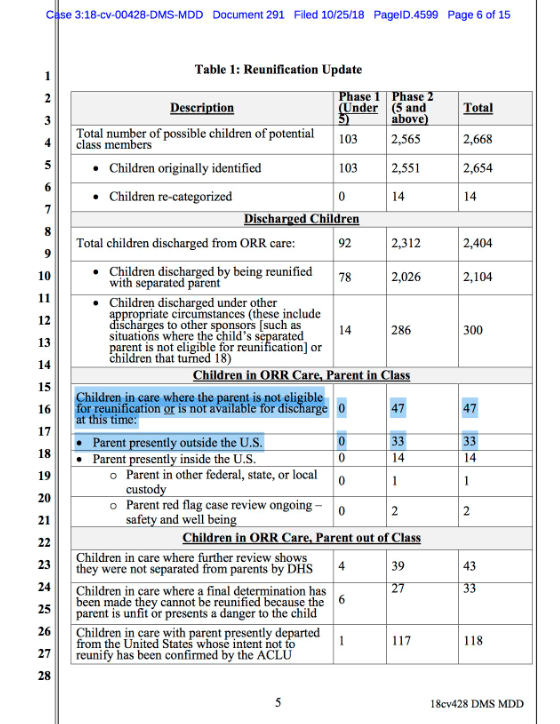 Overall, Washington’s economic policy of using migration to boost economic growth shifts wealth from young people towards older people by flooding the market with cheap white-collar and blue-collar foreign labor. That flood of outside labor spikes profits and Wall Street values by cutting salaries for manual and skilled labor offered by blue-collar and white-collar employees.

The policy also drives up real estate prices, widens wealth-gaps, reduces high-tech investment, increases state and local tax burdens, hurts kids’ schools and college education, pushes Americans away from high-tech careers, and sidelined millions of marginalized Americans and their families, including many who are now struggling with opioid addictions.