House GOP leaders are quietly allowing business lobbyists to prod GOP legislators into voting for a huge jobs-giveaway bill, despite the harm to swing-voting college graduates, and despite the proven risks to GOP legislators’ support in their districts.

The GOP leaders’ inaction is also creating a campaign problem for President Donald Trump, who may be forced to veto or sign a Democratic-run bill which hurts white-collar suburban voters.

The bill puts roughly 300,000 Indian contract-workers — and 300,000 family members — on a fast-track to green cards, and it expands the incentives for India’s millions of college graduates to join the U.S. H-1B and OPT job-outsourcing programs. The bill’s chief sponsor in the Senate is Sen. Kamala Harris, who may face Trump in the presidential election.

A GOP members’ vote for the job-outsourcing bill can spur primary opposition, said one source. “This issue is not impossible to become the vehicle to generate 15,000 votes in any district you can name,” the source said. In 2014, pro-migration Majority Leader Eric Cantor lost his primary after failing to note the growing anger about cheap-labor migration. In 2016, Rep. Renee Ellmers lost her North Carolina primary following her pro-migration promises.

Members support for cheap labor migration also hurts their election chances. In 2018, Rep. Kevin Yoder lost his Kansas seat after backing a prior version of the green-card giveaway bill to Indian contract-workers. The current bill is titled “The Fairness for High-Skilled Immigrants Act, and is authored by Silicon Valley Democrat Zoe Lofgren.

The bill includes no safeguards for American graduates, so it is being fast-tracked through the process without hearings or committee votes. The bill will be defeated if fewer than 50 GOP legislators vote yes.

Also, the contract-workers who become legal immigrants are highly likely to vote Democratic — which is a lesson finally learned by former Texas Rep. Pete Sessions on election night in 2018. Roughly 77 percent of Indians supported Democratic candidates in 2016, while only 16 percent said they voted for President Donald Trump, according to a post-election survey funded by the National Science Foundation.

A growing population of skilled migrants in a district also tends to pull pro-Republican voters into the Democratic camp, said an April 2018 study. “Our strongest and most significant finding is that an increase in high-skilled immigrants as a share of the local population is associated with a strong and significant decrease in the vote share for the Republican Party,” said the report, authored by pro-migration economist Giovanni Peri, Anna Maria Mayda, a Georgetown University professor now at the U.S. State Department, and Walter Steingress, an economist at the Bank of Canada.

The giveaway vote is slated for as early as Tuesday, amid a rising wave of protest by GOP voters who are learning about the impact of the 1.5 million contract-workers on the salaries and careers of Americans graduates.

The pushback has already prompted one GOP legislators to say he will demand a recorded vote on the bill, ensuring that voters will know which GOP and Democratic legislators are offering green cards to the Indian college-graduates who volunteer to take American white-collar jobs at salaries far below the level needed by U.S. college graduates. The likelihood of a recorded vote is a problem for many GOP legislators who want to hide their vote for the business-backed legislation. Many “are hoping to sneak it through… they’re hoping to not get on the record,” a source told Breitbart News.

But GOP-linked grassroots groups are making their views heard.

“HR 1044 rewards Silicon Valley robber barons at Facebook, Google, Twitter, and Pinterest with more minions who are willing to displace American workers in these jobs while simultaneously carrying out the censorship and suppression campaigns these companies have launched against American conservatives,” said William Gheen, president of the ALIPAC grassroots group. “Violating the civil rights of America’s current citizens is a job Americans won’t do, but imported labor will.” 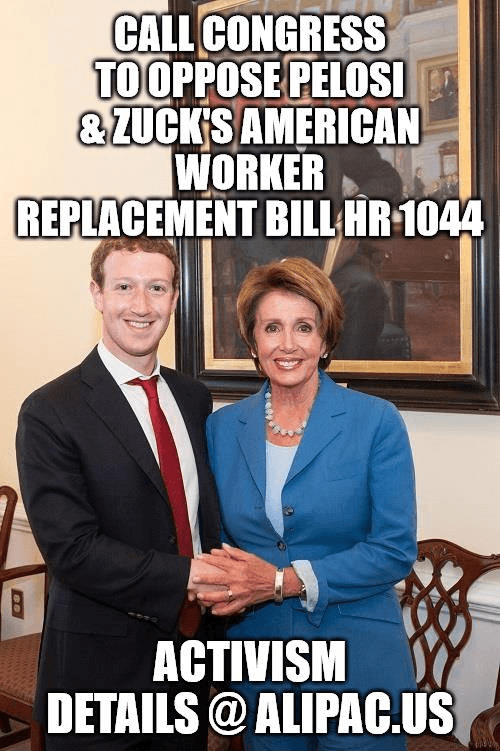 The Federation for American Immigration Reform has declared opposition to the legislation, which was put up for a vote even though Democrats have bypassed “regular order” by deciding to not hold hearings or committee votes on the outsourcing legislation.

“FAIR firmly opposes H.R. 1044, the Fairness for High-Skilled Immigrants Act, and urges all Members of Congress to vote NO,” said a Tuesday message from the group, which added that it would “include votes on this legislation in our annual report and highlight those who supported it over the coming weeks.”

Congress should not eliminate per-country caps and here is why: https://t.co/DFk8Ewng5l pic.twitter.com/LvD8ntpaiD

This bill will fundamentally alter legal immigration to the United States for generations to come; and few, if any, individuals from countries other than India or China will be able to immigrate to the United States on an employment-based visa. Our immigration system is not designed to benefit only one or two countries; and the magnitude of this bill’s deleterious effects cannot be overstated.

Lastly, but perhaps most importantly, this bill rewards tech and foreign outsourcing companies who replaced American workers with hundreds of thousands of low cost, less skilled H-1B guest workers. That is a slap in the face to victims of flawed guest worker programs like H-1B — American mothers, fathers, and breadwinners who lost their livelihoods to cheaper foreign replacements and outsourcing.

On Monday, NumbersUSA denounced the bill:

This legislation would reduce diversity within the current immigration system and harm American workers who compete directly with these workers. For example, workers from India, who would benefit under H.R. 1044, tend to be lower-skilled and willing to accept less pay than other employment-based green card recipients.

The Center for Immigration Studies is also spotlighting the problems:

A bill with such sweeping implications for US workers should not be passed without a hearing and without opportunity for members to offer amendments.

Adopting a different green card selection system that chooses the most highly educated and skilled workers would eliminate the need for a per country cap system, and would not reward the exploitative employers who thrive on the existing system.

Progressives for Immigration Reform, a left-wing group, also slammed the giveaway bill: “This is a very controversial bill and for that reason alone, the rules should not be suspended.  Perhaps the supporters of the bill are getting desperate and this attempt to [suspend the rules of regular order] reflects just that.”

Many of the American professionals who have been hit by H-1B outsourcing have formed their own advocacy groups to oppose legislators who back the Indian outsourcing. These groups include the American Workers Coalition, doctorswithoutjobs.com, ProUSworkers, No on H.R. 1044, and The Multinational Coalition Against H.R. 1044/S. 386.

In 2018, these American opponents of the green card giveaway bill helped defeat Kansas GOP Rep. Kevin Yoder, who supported a prior version of the legislation.

In turn, these professional groups are backed up by websites which are tracking the scale and location of the outsourcing industry in each legislator’s district. For example, h1bhuntinglicenses.com allows users to quickly check federal data to see which employers are trying to hire H-1B contract-workers in every zip code or career.  The federal data, for example, shows that employers tried to hire 2,500 foreign architects instead of Americans during the last decade.

SAITJ.org allows voters, staffers, and political researchers to quickly see how many H-1B workers were sought in each legislators’ district.

Employers in the Indiana district of Rep. Larry Bucshon asked for 331 H-1B workers, mostly to take software jobs at lower wages, starting at $40,000 and averaging out to roughly $72,000.

Employers in Kentucky’s first congressional district, held by Rep. James Comer, asked for 61 H-1B workers in 2017. The total included requests for five mechanical engineers who would get a claimed wage of $68,000.

Join AILA , @FWDus, and a panel of partners and experts for a Twitter Town Hall about the importance of high-skilled #immigration and the need for reform TODAY at 11:30 AM ET / 8:30 am PT. #HSTownHall pic.twitter.com/4SRXd7jHdo

Congress.gov shows the GOP sponsors of the Democrats’ green-card giveaway bill, and the date when they co-sponsored the bill:

This policy of flooding the market with cheap, foreign, white-collar graduates and blue-collar labor also shifts enormous wealth from young employees towards older investors, even as it also widens wealth gaps, reduces high-tech investment, increases state and local tax burdens, and hurts children’s schools and college educations. It also pushes Americans away from high-tech careers and sidelines millions of marginalized Americans, including many who are now struggling with fentanyl addictions. The labor policy also moves business investment and wealth from the heartland to the coastal cities, explodes rents and housing costs, shrivels real estate values in the Midwest, and rewards investors for creating low-tech, labor-intensive workplaces.