The number of foreigners getting green cards and legal resident status in the United States dropped by just 7.3 percent from 2016 to 2018, according to data released January 6 by the Department of Homeland Security.

But the inflow is still huge: It amounts to two legal immigrants for every seven American births. In 2019, mothers gave birth to 3,79 million Americans.

The improvement is denounced by business investors who want the federal government to import many more workers, consumers, and real estate customers. The migrant inflow helps to pump up their sales, profits, and stock values.

The percentage drop in green cards from 2016 to 2018 is actually 11.5 percent once the simultaneous decline in new refugees is counted, complained Stuart Anderson, a pro-migration advocate who writes for Forbes.com:

The latest statistics show efforts by administration officials to reduce legal immigration have, from their perspective, started to bear fruit. Favorable court rulings and another four years in power would mean even lower levels of legal immigration to the United States and fewer U.S. citizens allowed to have their spouses, parents and children come live with them in America. 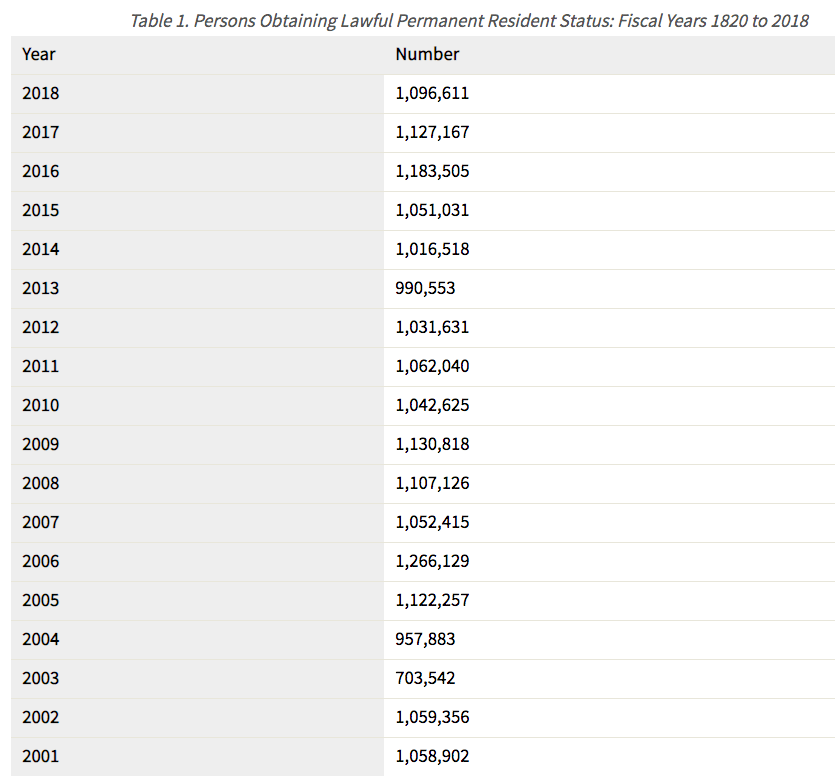 The presidential proclamation issuing the travel ban against five majority-Muslim nations – Iran, Libya, Somalia, Syria and Yemen, with certain restrictions added for Venezuela and North Korea – reduced immigration from those five countries by 18,595 (or 64.7%) between FY 2016 and FY 2018 (excluding refugees and asylees approved in earlier years).

However, Trump’s policies have not reduced significantly the inflow of foreign college graduate workers into the United States via the visa worker programs.

These include the H-1B, L-1, Optional Practical Training programs, and green card sponsorship programs. Overall, roughly 1.5 million foreign college graduate workers hold jobs in the United States, including at least 300,000 who are working while waiting for green cards. The imported workers are intended to suppress salaries earned by American professionals.

Trump’s statements about foreign workers show him zig-zagging between his voters and his donors.

“We have to allow smart people to stay in our country — if you graduate number one in your class at Harvard, [if] you graduate from the Wharton School of Finance,” Trump told radio host Laura Ingraham on January 10. “If we tell smart people to get the hell out, that’s not America first.”

Ingraham reminded Trump of the Disney H-1B scandal in 2016, where hundreds of Americans were replaced by H-1B workers. “You ran on people training their foreign replacements, that you ran against that. It’s humiliating for an American worker who works for a company for 30 years … to train your replacement,” Ingraham said.

“No, no, that’s different, I would never do that,” said Trump.

“Why shouldn’t we have American graduates of colleges and universities taking those jobs? Ingraham said.

“We do,” answered Trump. “But we don’t have enough of them … and we have to be competitive with the rest of the world too.”

The inflow of OPT workers would likely skyrocket if Sen. Mike Lee, R-Utah, passes his S.386 bill. The legislation would allow an unlimited number of foreign temporary migrants to get permanently renewable work permits once they can persuade — or pay — their U.S. employer to nominate them for a green card. This “Early Adjustment” rule would allow a huge number of foreign college graduates to permanently live and work in the United States, even without receiving green cards.

Other data shows that more than at least 1.7 million foreigners got “Employment Authorization Documents” in 2019 to work in the United States, including a few hundred thousand migrants from Central America. These migrants tend to reduce wages for blue collar Americans.

Also, both Democrats and Republicans in Congress are blocking efforts to deport more of the resident population of illegal immigrants. That population includes at least 11 million consumers and eight million workers.

Another poll showing the obvious: The # of Americans who want less legal immigration is x3 than # who want more migration.
Whites, blacks & Hispanics share similar support for lower migration, leaving liberals & high-income as the strongest supporters.https://t.co/ENh6pivdD1