Federal data shows that roughly 480,000 Chinese students studied in the United States in 2018, delivering more than $10 billion in fees to universities nationwide.

Amid rising concern about China’s coronavirus, the huge inflow creates healthcare problems for U.S. universities, but also for the many companies that have hired Chinese graduates in place of Americans.

Many of the foreigners come to the United States to get work permits and U.S. jobs, mostly via the Optional Practical Training (OPT) program, which is open to foreign graduates of U.S. universities. For example, the DHS data showed that Facebook hired 725 of the foreign OPT workers in 2018, alongside several hundred new H-1B visa workers.

Overall, the inflow of foreign students dipped by just 1.7 percent in 2018, and the award of the work permits nudged down by less than one percent.

There were 145,564 pre- and post-completion optional practical training (OPT) students with both an employment authorization document (EAD) and who reported working for an employer in calendar year 2018, compared to 152,681 in calendar year 2017—a nearly five percent decrease.

The report does not say how many of the OPT and CPT workers are Chinese, but an Indian official said 50,000 Indians have work permits via the programs. In contrast, Indians get roughly 70 percent of visas in the H-1B program, which keeps at least 900,000 foreign graduates in U.S. white-collar jobs. 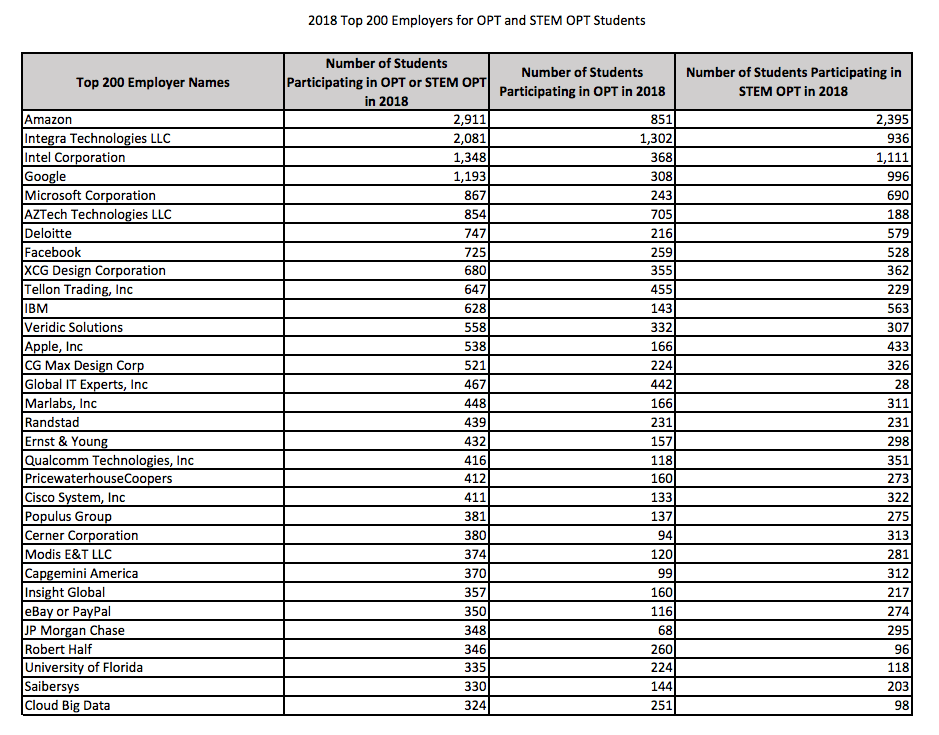 Many Chinese students also work as post-docs in university research laboratories, so reducing the incentive for U.S. science managers to compete for U.S. graduates by offering higher pay.

Careless US estb. lets China hire thousands of scientists in the US, incl. many employed by US taxpayers, to steal tech by the boatload, admits (far too late) bipartisan Senate report.
No gov't or Ivy League managers are fired.
No visa program is frozen.https://t.co/cEunR3gpBn

Many of the foreigners hired by these elite firms got three-year OPT STEM work permits after graduating from technology-related courses at U.S. universities. The work permits for OPT graduates and CPT students last just one year.

The hiring of OPT and CPT workers displaces American graduates, who are forced to seek lower-wage, lower-prestige jobs, often in cities far from Silicon Valley and other U.S. technology centers.

The inflow of foreign students dropped slightly from 2017 to 2018, while the inflow of Indian workers rose, according to the DHS report: