Half of the blue-collar migrants who openly crossed the southern border between 2014 and 2019 remain in the United States, according to March 2020 data posted by the Department of Homeland Security.

Agents registered 3.5 million arrivals and sent 1.8 million back home via deportations and repatriations by March 2020, said the December 31 report. The report did not include data about the additional migrants who successfully sneaked through the border.

But 280,000 of the 3.5 million were provided “relief,” so allowing them to stay in the United States and eventually get green cards.

That means one in 12 blue-collar migrants get the colossal prize of U.S. residency and citizenship for themselves and all of their descendants — in exchange for surviving the U.S. government’s semi-formal obstacle course of cartels and coyotes, distance and bribes, judges and lawyers, deserts, walls, and border agents.

Moreover, another 1.4 million blue-collar migrants are still living in the United States, mostly while they are waiting for a final court decision, said the report, titled “Fiscal Year 2020 Enforcement Lifecycle Report.”

Many of those 1.4 million not-deported migrants take jobs from U.S. employers. The imported labor reduces the marketplace pressure on employers to compete for American workers with offers of higher wages, better working conditions, and more investment in labor-saving machinery.

Amid enthusiastic sympathy from white-collar progressives, the migrants hold down Americans’ blue-collar wages while also nudging up rents, and they crowd into the K-12 schools needed by the children of blue-collar Americans. 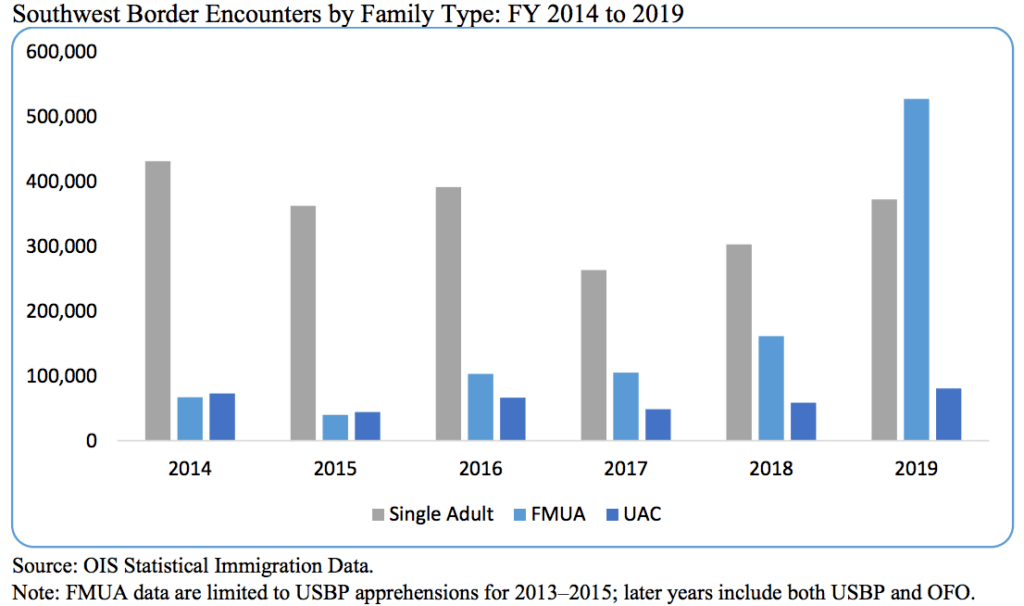 Citizenship is the first prize in the migration obstacle course, said Mark Krikorian, director of the Center for Immigration Studies. But, he added, “everybody who gets in wins something.”  He continued:

If you get in, and can live and work here for a while — even if you ultimately lose, and even if you’re taken into custody and sent home — you’ve still gotten a year or two or three years of ability to live in the United States, to work here, and to establish the connections and networks that lead to future migration.

Only the migrants who get sent home immediately “don’t get anything,” he said:

Some people lose if they mortgaged their little farm or home to pay the smuggler and are turned around immediately (before they can get a U.S. job to repay the loan), or if they’re victimized during the trip. That’s a real loss. No question about it, a real cost.

Most white-collar migrants arrive via the visa worker obstacle course. They include the roughly one million H-1B workers and spouses used by Silicon Valley companies and other firms, the J-1 workers at universities and healthcare chains, and the OPT workers used in the outsourced software sweatshops at the bottom of the Fortune 500’s labor pyramid.

The DHS data shows that 1.8 million southern border migrants were repatriated from 2014 to March 2020.

But the DHS data does not show how many of those deported migrants were deported on arrival without being released into the job market.

The data also shows that 300,000 migrants have been given a “Final Order” to go home — but have not returned home. That number includes roughly 76,000 people who skipped out on their court hearings. Many of those illegals hold jobs in Democrat-run “sanctuary cities,” much to the disadvantage of lower-skilled and younger Americans.

The data shows that 1.1 million migrants remain in the United States while they wait for a final courtroom decision on whether they can stay or must go home.

An appendix to the DHS report shows that 315,000 UACs were accompanied from Central America to the border by coyotes from 2013 to 2020. The vast majority were the children of illegal immigrants who had earned enough money in U.S. jobs to hire coyotes to escort their children to U.S. border officers, who then deliver the young migrants to their parents. Only about 15,000 of these younger migrants have been sent home, while roughly 90,000 were allowed to stay — even though many were coming to work as child laborers in jobs that would have been held by Americans.

The coyotes and migrants improve their odds when they overwhelm the border system, detention facilities, and courtrooms, the DHS report indicated:

The detention pattern yielding the greatest share of unresolved cases were encounters initially placed in detention but then released prior to a final enforcement outcome. These “partially detained” encounters resulted in repatriations just 3 percent of the time and relief just 12 percent of the time, with 85 percent still unresolved, including 18 percent with unexecuted removal orders (14 percent in absentia orders).

That coyotes’ strategy was recently aided by three California judges who directed the agencies to reopen the 1997 Flores catch-and-release gateway through the border.

Overall, the low ratio of total losers to partial or complete winners will encourage the next wave of migrants, said Krikorian:

How could it not, especially once the [Joe] Biden administration comes and let’s even more people in? Even if you don’t win first prize, the second or third prizes are still pretty good, and with a Democratic administration that is going to be more lax in border enforcement, we’re practically inviting people to sneak across the border.

President-elect Joe Biden says his border policies will emphasize the need for “family reunification.” His policy may help more illegal migrants get into the United States by pleading a need to join their spouses, parents, uncles, or aunts.