Major retail suppliers are already running low on supplies as cargo ships are log-jammed at California ports. Simultaneously, there is a shortage of truck drivers to supply stores, according to NBC 2.

Crissy Barchers owns the Halloween store Red Headed Witches in Cape Coral, Florida, and told NBC 2 that this year has been challenging due to supply chain problems:

We are very excited that Halloween season is here. We are under some crazy experience where shipping is a nightmare, getting product is a nightmare, our wholesaler can’t get product because the cargo ships are stuck waiting to unload and there’s no one to unload them. We didn’t even realize this was going to be an issue until mid to late September. By mid-September when all of our big Halloween initial orders started coming, sometimes it was half short.

I am up like a mad woman every day checking the wholesaler, checking the availability just hoping that maybe they’re getting shipments in and I can jump on it. It’s a grueling process, but every day I’m on the computer, I’m making calls, I’m sending emails, I’m trying to find alternatives solutions just to get some new product. Right now you’re on a 7-10 day waiting list, so if I place an order today, they’re not even going to process it for 7-10 days. Then you have to factor in shipping, so this week is really the last week we can even order anything because by the time you factor in how long it’s going to take to get here, we could maybe have a box that shows up on Halloween.

Twenty-seven-year-old Ben Wieber of Kalamazoo, Michigan, was unsuccessful in his search for a miniature haunted house to add to his Lemax Spooky Town collection, the Wall Street Journal reports.

“I went to Lowe’s, Home Depot, T.J. Maxx, HomeGoods and I’m already seeing Christmas stuff replace the Halloween stuff, which is ridiculous,” Wieber explained to the Journal. “I’m like, hello? Are we just skipping Halloween this year?”

Halloween spending is expected to reach an all-time high this year, the National Retail Federation (NRF) predicts, according to the Journal. Spending is estimated to exceed $10.1 billion this year.

Consumers who waited until October may be down on their luck when it comes to finding a fun costume or spooky decorations. 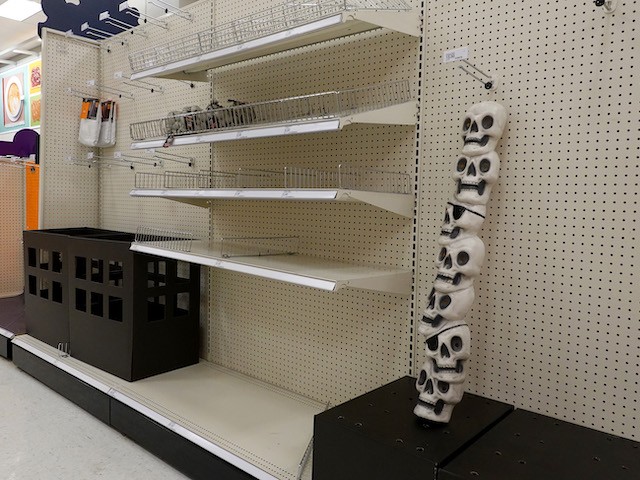 Only a few items sit on the shelf in the Halloween supply section in a Target store on October 13, 2021 in Miami, Florida. (Joe Raedle/Getty Images)

Spirit Halloween employee Kam Featherstone who works in Layton, Utah, said the store was well-stocked during the month of September, the Wall Street Journal reports.

“[Our selection was] really good between the middle of September and the end of September,” said Featherstone. “Once October hit it was just gone, gone, gone.”

The company “experienced a few scares this Halloween season,” a Spirit Halloween spokesperson told the Journal. Such scares were rooted in product shipping delays and increased shipping costs.

On October 14, the Executive Director of the Port of Long Beach, Mario Codero, referred to the enormous backlog of ships off of the California coast as a “national crisis” in an interview with Yahoo Finance.

“This issue is a national crisis with regard to the supply chain and, for that matter, a global crisis,” Codero explained. “It’s rather complex, but on the other hand, I think we’ll start seeing some easing the container vessel wait time as we move toward the end of the year. This is peak season.”

"This issue is a national crisis with regard to the supply chain and for that matter a global crisis," Port of Long Beach Exec. Dir. @MarioCorderoLB says about supply chain disruptions. "This is peak season… the root of the problem has been going back to the COVID era." pic.twitter.com/zPqfdPT5Vc