Hollywood star and WWE champion John Cena has apologized to China for correctly calling Taiwan a “country” during the recent press tour for the movie Fast & Furious 9. His groveling mea culpa highlights the degree to which Cena’s career has become intertwined with Communist China — and how his employers at NBCUniversal and the WWE could have lost billions of dollars if they angered Beijing.

In a video posted to China’s Weibo, John Cena acknowledged that he recently made a “mistake.” Though he didn’t elaborate, Cena appeared to be referring to a recent interview with a Taiwanese TV network during which he reportedly said Taiwan is “the first country to watch the movie.”

His remark set off a wave of social media criticism in China, with some fans demanding the actor acknowledge that Taiwan belongs to China.

Cena delivered his apology in Mandarin, which he has learned as part of the WWE’s efforts to expand into China.

John Cena apologized in Chinese on Sina Weibo after calling Taiwan a country during an interview promoting Fast & Furious 9 pic.twitter.com/dzRKIYgEzL

Universal had a vested interest in Cena’s apology. His act of contrition appears like a necessary PR move to protect one of the studio’s most valuable movie franchises. Fast & Furious movies have consistently grossed more money in China than any other country, including the U.S.

China recently surpassed the U.S. to become the largest movie market in the world — an accomplishment made possible in part by the coronavirus pandemic, which forced the closure of U.S. cinemas for several months.

Since China limits the number of foreign movies that play domestically, Hollywood studios have gone to great lengths to stay in Beijing’s good graces. Paramount removed a reference to Taiwan in its upcoming Top Gun sequel, while Disney changed a Tibetan character to a white woman in Doctor Strange.

Disney has also refused to comment on China’s human rights violations in the western province of Xinjiang, where the studio partnered with local authorities to shoot parts of its live-action Mulan. 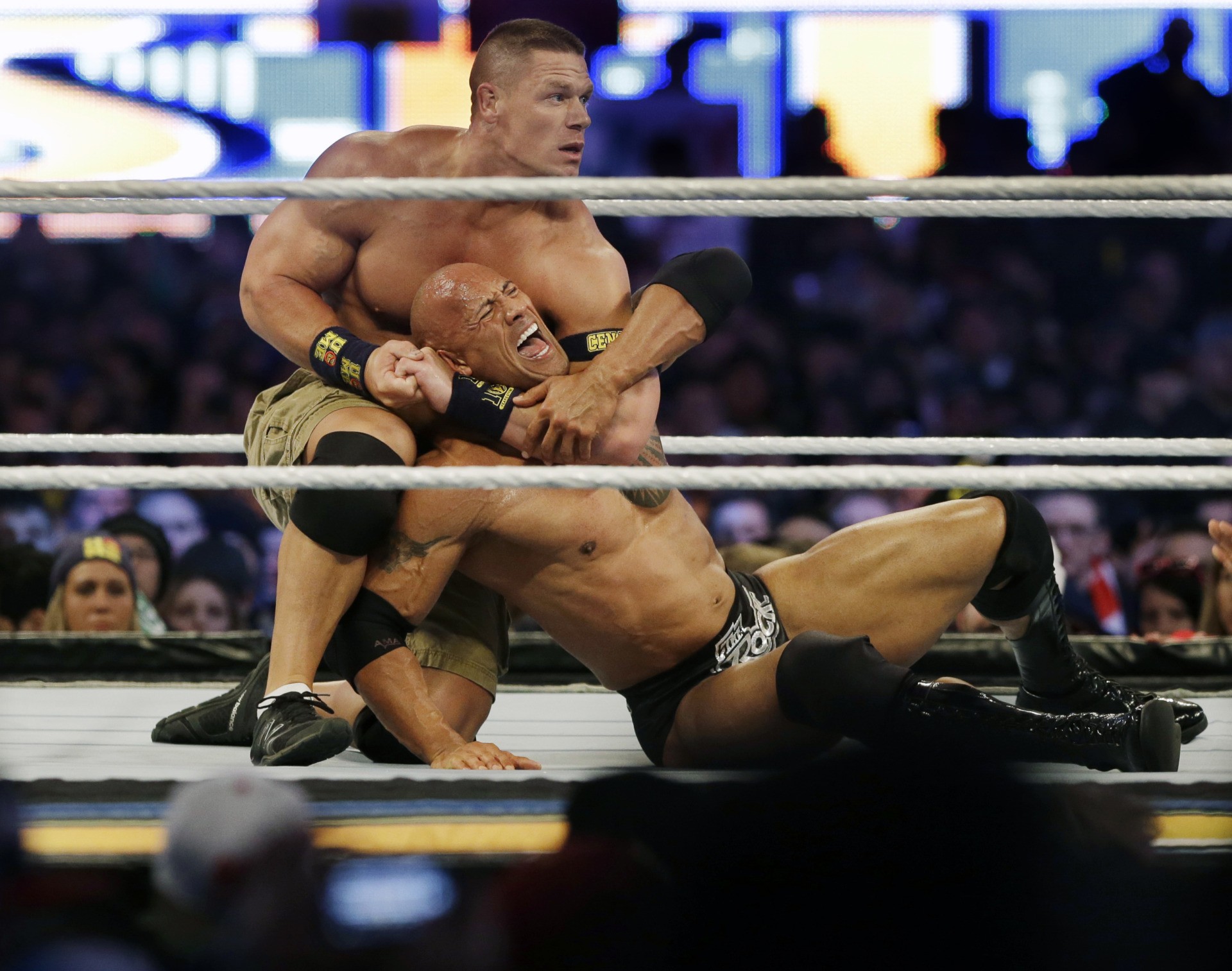 FILE -In a Sunday, April 7, 2013 file photo, wrestler John Cena, top, chokes Dwayne Douglas Johnson, known as The Rock as they wrestle during Wrestlemania, in East Rutherford, N.J. WWE bills WrestleMania as its Super Bowl, and is headed to a stadium worthy of a Super Bowl on Sunday, April 3, 2016. The WWE has lofty expectations of stuffing 100,000 fans inside AT&T Stadium in Arlington, Texas. (AP Photo/Mel Evans, File)

F9 is Cena’s first Fast & Furious movie, and in many ways, he has come to embody the corporate synergy between NBCUniversal and the WWE. NBC’s Peacock is the exclusive streaming home of the WWE Network in the U.S., offering new and archived content as well as pay-per-view matches.

And like Universal, the WWE is betting big on China, where Cena is better known for his wrestling career than acting. In 2017, the WWE launched the WWE Network in China in partnership with the PPTV streaming service. The service showcases WWE’s major live events, original series, and classic matches. The company has also partnered with Chinese broadcaster PP Sports.

Last year, the WWE expanded its footprint in China by teaming up with iQIYI Sports to air the WWE’s RAW and SmackDown events each week. In addition to live broadcasts, the deal includes a video on-demand service  featuring monthly WWE pay-per-view events.

The WWE has only to look to the NBA to recognize the fickle nature of doing business in China. The NBA reportedly lost eleven of its local partners in 2019 after Houston Rockets general manger Daryl Morey expressed support for pro-democracy protestors in Hong Kong.

NBA commissioner Adam Silver stated at the time that the NBA could lose up to $400 million as a result of the controversy.

The WWE has experience standing up to autocratic countries.

In 2018, some of the WWE’s biggest names were quick to register their disapproval to Saudi Arabia following the death of Jamal Khashoggi. Wrestlers who were set to appear in the WWE Crown Jewel in Riyadh that year withdrew from the event as media pressure built to punish the kingdom over Khashoggi’s death.

One of the wrestlers who quit the show was John Cena.

Universal and the WWE didn’t immediately respond to requests for comment from Breitbart News. John Cena couldn’t be reached for comment.