Netflix is officially a dog stock, with shares of the left-wing streaming giant losing a whopping 40 percent of their value since the start of 2022 amid anemic new customer figures and analyst downgrades, all of which point to a rockier future ahead for the once invincible company.

Shares of Netflix — which has a production deal with former President Barack Obama — were down nearly 12 percent in morning trading Monday after the stock plummeted more than 20 percent Friday after the streamer reported weaker-than-expected subscriber results for the fourth quarter and a pessimistic outlook for the first quarter of the new year.

And now there’s even more bad news: a new study estimates Netflix could lose hundreds of thousands more subscribers as several Disney-owned hit shows including Modern Family and Sons of Anarchy are leaving the streamer in the U.K. and migrating to Disney+. 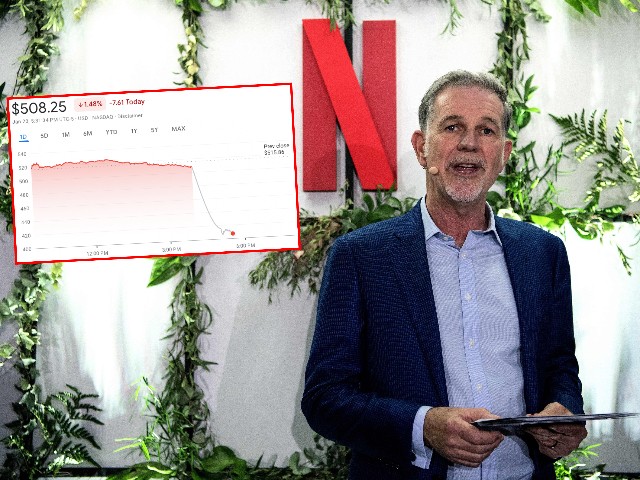 Analysts at the research firm Digital i estimate Netflix could lose as many as 750,000 customers in Great Britain as these titles ranked among the most-streamed in Europe, according to report in the Guardian.

It’s part of a larger trend that has seen legacy Hollywood studios remove more of their content from Netflix in order to build their own streaming services. Disney+ and HBO Max are moving aggressively to lure customers away from the competition as consumers grow more reluctant to subscribe to multiple streaming services and seek to consolidate their at-home entertainment options.

Macquarie Research’s Tim Nollen had an even more negative prescription, downgrading the stock from “neutral” to “underperform” and cutting the price target from $615 to $395.

Netflix has blamed the recent quarter’s weak subscriber growth on the COVID-19 pandemic while also citing growing streaming competition. As usual, the company didn’t address consumer disenchantment with its increasingly woke, left-wing content, including the climate-change satire Don’t Look Up and the titles produced under the Obama’s production banner.

Netflix’s top executives are among Hollywood’s most active fundraisers for Democrats. Co-CEO Reed Hastings donated $3 million to help California Gov. Gavin Newsom (D) fight off the recentrecall effort — the largest amount at the time to the Stop The Republican Recall fund.