A scuba diver helped an 86-year-old woman recover her lost wedding ring at the bottom of a Pennsylvania lake, finding the correct one against all odds.

Grace Paulnack of Hawley, Pennsylvania, kept that wedding ring on her finger for 64 years until it slipped off her hand while she was waving her hands around on a dock at Lake Wallenpaupack in the Poconos on Wednesday, WNEP reported.

“I thought it was an omen,” her 89-year-old husband Carl Paulnack said. “This is the end of our life. I am not superstitious, but I thought, this is an omen. This is a harboring of things to come. Now she says, ‘Don’t worry about it. We will get another ring.’ Nope, I want that ring.”

That is when the Ledgedale Volunteer Fire Department’s Dive and Rescue Team stepped in to help.

Lt. Rich Pontosky, who serves as a volunteer for the dive team, responded to the call Wednesday afternoon while working at his paying job and drove his personal vehicle to meet another diver, Penn Live reported.

Pontosky first dropped a weight followed by rope in the water about where the ring fell in, and then suited up in his scuba gear. 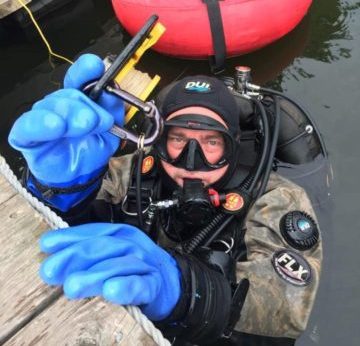 He swam about 18 feet underwater to follow the rope, using a flashlight to guide him. Pontosky used his flashlight until he noticed a shiny metal object tucked away into a slit.

“It was about the size of the head of a pin,” he told Penn Live. “I hovered over it and used my hand to pluck it up.”

Before he grabbed it, he noticed a second shiny object. After waiting ten minutes for the dust to settle, Pontosky recovered two rings that made up Grace Paulnack’s wedding band after spending less than an hour underwater.

Once he returned the rings, Grace Paulnack thanked him profusely and hugged him.

“They were crying. I was crying,” Pontosky said Sunday. “It was a great day. I’m still pumped up about it.”