Climate activist John Kerry warned Monday that geopolitical tensions including floods, famine, pestilence, war and rumors of war must all be set to one side as the time has come for another “urgent” climate conference to seal the fate of the world.

Kerry appealed for everyone to focus on him and his climate call as the U.S. and Egypt on Monday launched a joint working group to prepare for the COP27 conference in Egypt’s Red Sea resort of Sharm el-Sheikh in November, AP reports.

The man chosen by U.S. President Joe Biden to be his Special Envoy for Climate said other world tensions, including coronavirus and the ongoing Ukraine crisis, “will not change the reality of what is happening every day with respect to our climate,” and called the issue an “international threat for all of us.”

John Kerry is drawing scrutiny for his downplaying of China’s slave labor of Uyghurs, from which he and his wife may benefit financially. https://t.co/QpVau60eWt

“There are no politics in this. There is no ideology in this. This is not anything to do with some of the issues” of concern for the U.S. administration, Kerry said at a news briefing in Cairo with Egyptian Foreign Minister Sameh Shukry.

Neither official took questions from reporters. 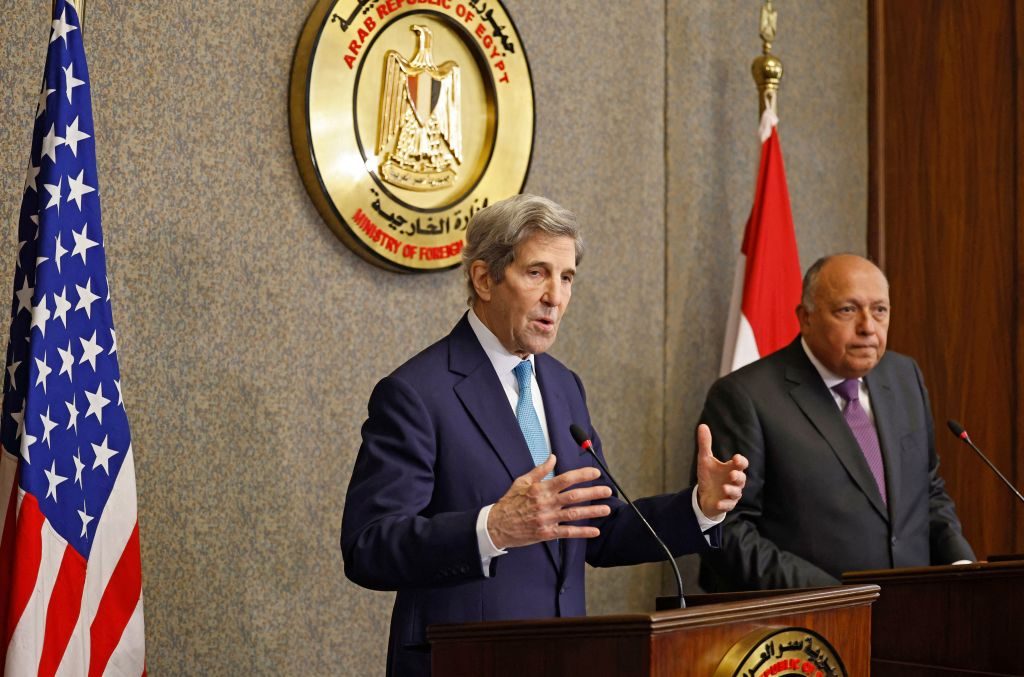 Kerry, who also met with Egyptian President Abdel Fattah el-Sissi, was referring to conflicts in the Middle East and likely Egypt’s human rights record, which has drawn criticism from the U.S. and other western governments.

The former U.S. senator and secretary of state, who flew into the Egyptian capital on Sunday, is expected to speak at the American University in Cairo on the future of international climate action in the leadup to COP27, the State Department said.

Revealed: John Kerry, the U.S. special presidential envoy for climate, took a private jet to Iceland in 2019 to accept an environmental award. https://t.co/VfizY091WE

Kerry’s constant global travel in the name of climate salvation is not always welcomed by his critics such as the time in 2019 when he traveled on a private jet to Iceland to receive a climate change award.

When Kerry was asked why he chose to fly private, he responded private jets are “the only choice for someone like me.”

“If you offset your carbon, it’s the only choice for somebody like me who is traveling the world to win this battle,” Kerry said.