Gosh! How wickedly funny it was of a group of internet pranksters to whip up confected outrage over Dr Matt Taylor’s harmless, if rather loud, shirt. That’s the Matt Taylor who just landed a spacecraft on a comet, by the way, in perhaps one of the most remarkable scientific achievements of the decade.

How brilliantly witty, then, for spoofers to take this achievement and make it all about whether or not the shirt he was wearing during an interview was “sexist” or not. Because this can only be a spoof, right? Some kind of trolling or stunt? No sane person, particularly not writers for those esteemed organs, The Verge and The Atlantic, can possibly have thought his choice of clothing was a problem.

No, the only explanation is that these bloggers and tweeters missed out on April Fool’s Day this year, and decided to stage a prank mid-November instead, to really sock it to the radical feminists who have been getting such a bad press recently—and perhaps to steal page-views from The Onion.

I mean, what better way to lampoon a movement that most women want nothing to do with, because it’s obstreperous, humourless, nitpicky, hectoring, tone-deaf, misandrist and populated by bores, than hounding a scientific hero because he dared to wear a shirt with a pair of boobs on it? A shirt, I might add, made for him by a female friend.

Christina Hoff Sommers, a feminist academic at the American Enterprise Institute, expresses the problem succinctly: “Feminist bloggers claimed that his shirt would make women feel unwelcome in [science, technology, engineering and maths]. What nonsense. No woman with a serious interest in astronomy would be deterred because she saw a tattooed guy in a risqué shirt.”

“Feminism used to be about freedom and happiness. Lately it has entered an Orwellian Junior Anti-Sex League phase. Even the most mild sexual joke, song, or sexy lady T-shirt arouses the Twitter outrage warriors. Women are more than welcome in science and technology, but I doubt that most scientists—male or female—welcome the arrival of these chronically-offended, humourless gender warriors.”

Feminism has a serious, perhaps even terminal, public relations problem at the moment. Most women don’t want anything to do with it, because they know that the third-wave, intersectional brand of feminism currently in vogue is inextricable from angry, lesbianic man-hating.

These days, the one thing guaranteed to send a man running, and ensure you stay alone forever, getting porky and hoarding stray cats while learning to knit jumpers for grandchildren you’ll never have, is announcing that you’re a “feminist”. At least, that’s the popular perception and it’s why so few women anywhere in public life want to be associated with that toxic label.

Anyway, what could otherwise have been dismissed as a skit—I’m still giving them the benefit of the doubt—turned ugly yesterday when Taylor welled up in an on-camera apology. The poor guy had been hounded into making a tearful confession when he had done nothing wrong. “I made a big mistake and I offended many people and I am very sorry about this,” he just about managed to squeeze out.

By contrast to those “This Is What A Feminist Looks Like” t-shirts, which are sold for £45 but made by 62p-a-day female sweatshop workers sleeping 16 to a room, Taylor’s shirt was a lovingly-made one-off from a friend—a woman called Elly Prizeman. Prizeman, who works in a tattoo laser salon in Chelmsford, Essex, wrote movingly on her Facebook wall about the furore:

“My heart just broke watching Matt’s apology. That is not cool. The public can be unreasonably cruel. I’m saddened and angered by this,” she said.

No one disagrees with the equality of the sexes in principle. But some feminists want special privileges for girls. They say that depictions of women’s bodies should be treated differently, because male and female bodies carry different associations. But anyone who wants to see double standards in action only needs to look at what feminists really get up to and imagine men getting away with the same thing. Can you imagine, for example, a man being let off the hook for joking about domestic violence?

Such is the level of public incredulity and support for Taylor and Prizeman, the latter told me via social media that she is now considering commissions. Hollywood actors and others were seen telling her via Twitter last night that they are anxious to purchase replicas of the shirt she made for Taylor. So perhaps some good will come out of this mess after all.

Feminists picks on easy targets these days because they’ve lost the battle for public sympathy and because they can’t win arguments in the public square. Instead, they go for low-hanging fruit: minuscule perceived infractions by people who would normally be ideological allies. (Just a hunch, but I’m guessing Taylor and Prizeman don’t vote Tory.)

The circus is fuelled by far-Left bloggers such as The Verge’s Chris Plante, formerly a cofounder of games news site Polygon. Both sites have been implicated in a collusion scandal recently. Plante was responsible for the post about Taylor’s shirt that kick-started the absurd spectacle that followed. His post was titled: “I don’t care if you landed a spacecraft on a comet, your shirt is sexist and ostracizing.” This, from a tech writer.

I started this column by poking fun at the people responsible for bullying Taylor into an apology, but in fact there’s nothing amusing about the cruelty and smugness of social justice warriors who could yesterday be seen on Twitter crowing about their victory and exchanging smarmy congratulations for making a scientific hero cry on television.

Described by his sister as a “typical absent-minded scientist” who struggles to park his own car, Matt Taylor is the sort of quirky genius normally lauded by the Left. But they’ve become so obsessive and self-destructive that they’ve turned to internecine bullying raids to get their pound of flesh. Can’t we please cast these malcontents, agitators and sociopaths back out into the wilderness where they belong? 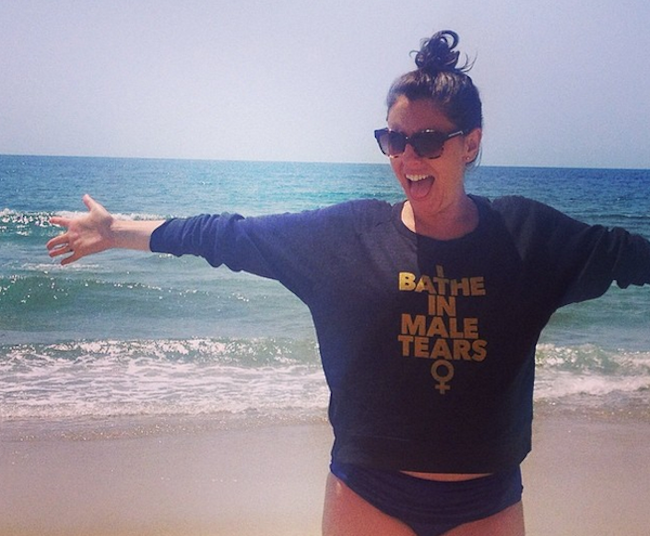