In the Netherlands the number of breeding pairs of geese has increased by over 2,000 per cent in 15 years, which is causing enormous damage to Dutch agriculture as birds attack crops meant for human consumption and agriculture.

Left wing parties in the Netherlands managed to ban shooting geese for sport in 1999, and today the Labour and Green parties continue to campaign to ban all shooting in the country. The law was voted through on the strength of animal rights and welfare activist propaganda, yet despite evidence that the ban has actually increased suffering to animals the parties are pressing ahead to ban more.

The explosion in goose numbers have disproved the claims of the left-wing groups at the time of the ban that without human intervention, nature would “regulate” itself and there would be no damage to agriculture.

The problem has become so bad the Dutch government has been forced to set up a permanent compensation fund which now pays out over €11 million a year to farmers who suffer “horrendous” damage to their crops from geese. This figure is up 300-per-cent in the past five years. 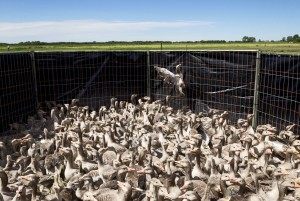 Watson magazine reports the farmers are furious with the birds – they eat up crops for human consumption, and grass meadows meant to feed cattle. The compensation paid to them by the government covers less than half of their losses, which are estimated to run to €25 million a year. The problem also spills over into neighbouring countries, with Dutch flocks causing problems in Essen, Germany, where the birds and their droppings are polluting a lake.

Having legislated itself into a corner and having banned the shooting of birds for sport, the Dutch government had no choice but to start culling geese itself to alleviate the pressure on agriculture. The government now pays for 250,000 birds to be killed a year.

One hunter licensed by the state to perform culls on their behalf works near Schipol airport, where the large flocks of geese regularly collide with aircraft and can pose a significant threat to human life. He rounds up young, flightless birds and gases them by pumping car exhaust into a converted trailer, killing tens of thousands a year.

Although this cull satisfies the letter of the law, it is by no means the improvement for animal welfare promised by environmentalists and left-wingers when the ban was introduced. Indeed, unlike the instant death by shotgun, gassed birds can take up to a minute and a half to die, during which time the birds panic and start to attack each other in fear.

The images of thousands of Geese being herded into vans to be gassed has triggered a debate on the subject in neighbouring Germany, where the associations with the Holocaust are clear. German hunting groups condemn the practice and advocate shooting as more humane – and cheaper for the taxpayer.

Despite the clear animal welfare and agricultural benefits of shooting for conservation, the animal rights lobby has remained conspicuously silent on the subject, even calling for gassing to replace shooting in other countries.

The director of the Natural Hunting Foundation Marc Henrich remarks “the duplicity raises the question of whether this really comes down to animal protection and natural conservation with geese, or if the goal is actually to get at hunters and to throw a spanner in the works for ideological reasons”.

He continued: “We hunters should monitor these trends closely. A regulated ordinary hunt is the best way to protect animal welfare. For this, we should ensure that birds are not shot from the nests, that nests are not destroyed, and that flightless geese are not herded for gassing. With such a campaign of destruction, we would have nothing to do with it”.

Earlier versions of this article contained the claim that the UK based Animal Aid group supports the gassing of geese and other species identified as agricultural pests. The author accepts this claim was without foundation and apologises to Animal Aid for the genuine error.