Swedish police are scrambling to defend the national immigrant population against angry natives as tensions boil over following a double murder in an IKEA superstore this week.

Although the force has proven unable to solve the rising tide of immigrant violence in multicultural melting pot city Malmö, it has jumped to declare protests against the killing illegal and shut them down. Expressing concern that the inhabitants of asylum centres “get worried when these things happen”, a police spokesman explained how they had cleared a protest.

Meeting outside the same asylum refuge where the two suspected murderers lived prior to the IKEA attack, a small group of men held banners and threw eggs. The informal protest took place as one of the men arrested at the scene of the double murder was released from prison, and his lawyer demanded compensation from the state, as his client had found the process of being arrested traumatic.

He claims he has no idea why his friend would act in such a manner, and the attack took him by surprise.

In Sweden, discussing matters of immigration or race is all but banned, with enormous social pressure on individuals to fit in with the government’s policies on multiculturalism exerted by a vocal left-extremist set. TheLocal.se reports the mainstream political parties are starting to wake up to the fact that forcing people to keep quiet about one of the most pressing subjects of the day is causing increasing resentment.

Perhaps more importantly for the major political parties, this growing pressure for change is finding release in the form of new political parties such as the Sweden Democrats. The Eurosceptic, anti-mass immigration party continues to make strides in elections despite efforts to starve them of publicity, going so far even as working to ban their political campaigns from appearing on national poster-boards. 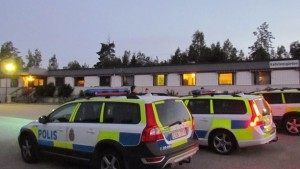 Police outside the Arboga refugee centre, where the accused killer had lived / Sweden National Radio

Others are taking a more direct approach. A cross-party campaign is presently gathering followers to launch a national day of protest in September when parliament reconvenes, to call for the total resignation of the government in shame over their failure to deal with the migrant violence crisis.

Organised on Facebook and already with thousands of followers in a country with one of Europe’s smaller populations, the description calls in Swedish for “a government that looks to the residents’ of Sweden safety and dignity”.

Issuing a call to arms, the page lists the violent deeds perpetrated by asylum seekers and economic migrants in Sweden this year, including dozens of grenade attacks, rapes on native women, and brutal murders. It asks: “Are you just like us, tired and worried about our country’s rapid decline and disappointed in our incumbent government’s irresponsible stance to everything that happens?”

Calling on fellow countrymen to meet outside the parliament building in Stockholm, the message continues: “We had enough when Monday’s tragedy occurred when two people were executed brutally inside at IKEA in Västerås. THAT’S ENOUGH! And if you feel like us, you are cordially invited to attend. Your vote is important – you are important.”

Yet still others in Sweden are growing disillusioned with the democratic process and have vowed to take matters into their own hands, and to smoke out the illegal immigrants they believe are causing ill to Sweden. The same asylum centre where the self-confessed killer lived was evacuated after police uncovered an attempt to fire-bomb the building in the early hours of Saturday morning.

The 83 residents of the shelter were relocated to a local church while army bomb technicians were brought in to examine a device located after police received a tip-off. The same night, another centre in Värnamo was successfully fire-bombed, but the flames were extinguished before they spread too far.

A police spokesman said: “It was a resourceful intervention by passers-by that ensured the fire was stopped early. We have undertaken an investigation and can conclude that the fire was not an accident. It has been classified as arson although we do not yet have any suspects”.