One in 25 people that boards a boat bringing migrants across the Meditteranean into Europe will die. This is brutal, emotive extent of Europe’s migrant crisis. If the numbers don’t do it for you, the pictures will, which is why the Independent has splashed a dead child across its front page to make what is basically a politcal point. 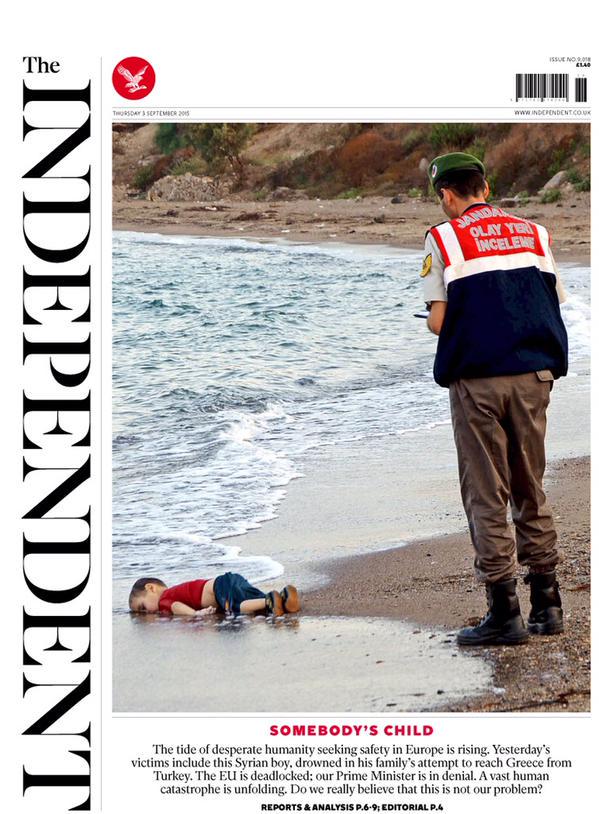 Yes, there’s a humanitarian crisis happening out there. We’ve known about it for a very long time now. An entire summer, and some of us for longer.

But isn’t it interesting, that as soon as it seems that the liberals have lost the debate on the matter – Britain has not waved its white flag like Germany and declared, “Come in your millions! We’ll accomodate you all – that the debate suddenly switches from the numbers and the practicalities to pictures of dead babies washed up on beaches.

Let’s be honest, no one can look at that picture (right) without their heart sinking. As the BBC’s Today Programme noted this morning, the child is dressed well, wearing trainers, and resembles what could be “any of our children”.

That may be right – but what that has to do with opening Britain’s borders to hundreds of thousands of migrants, be they refugees or not, I don’t know. Since the journalists have come back from holiday, the frame of the debate seems to be changing. They’re not migrants now, they’re refugees. No more should we talk about the biblical-scale exodus we’re seeing, and the illegality of the boats, the people smugglers, and the impact on the United Kingdom. Now it’s all about big, emotional pictures.

But we’ve been told for so long now that we shouldn’t be thinking about migration emotionally. When the left attacks the right over this issue, they do it by claiming that the people who don’t believe we should have open borders aren’t thinking with their heads, but rather with their guts. Knee-jerk reactions to immigration numbers, we’re warned, is not helpful.

And the truth is being twisted too.

According to German politicians and the newspapers they brief, Britain are the “quitters” or “slackers” not taking their “fair share” of migrants.

But that claim at best can only be extended to the Syrians, Eritreans, Iraqis, and Afghanis that Germany has now opened its doors to. According to the British Red Cross, Britain processes over 30,000 asylum claims last year, with 41 per cent of those applying being successful. That’s just over 12,000 people being given asylum in Britain.

No, it’s not the 800,000 that Germany has promised to take of this new influx. But it isn’t the “none” that many claim Britain is taking.

And that’s because when the Lisbon Treaty was ratified by the British government, someone had the foresight to make sure that Britain had an opt out of any common, European asylum policy. What we’re now being asked to do, despite having purchased the expensive alarm system for our house, is leave the front door open.

Labour leadership candidate Yvette Cooper pontificated earlier this week that Britain could easily take 10,000 asylum seekers. But most of the media reporting around her comments seems to have left off the all important “per month” that she added to the end of it.

That’s 120,000 people per year. And that’s not including the family members they would also be entitled to bring along with them.

I’m not against immigration absolutely. But I am against open borders. When you scratch a libertarian on this point, they will cite the economic contributions that immigrants make. But no one can answer the questions about how Britain’s towns and cities are being inexorably altered by such massive demographic shifts. You only have to look as far as Tower Hamlets in East London to see what such numbers can lead to: segregation, deprivation, corruption, radicalisation, you name it. Unchecked, mass migration has quantifiable, negative impacts on Britain’s communities. It has had similar impacts in Sweden, in Austria, and in Germany too.

But Britain, we’re often and rightly reminded, has a rich tradition and history of helping those seeking refuge. That’s right. And it is something to be incredibly proud of.

But we are comparing apples and oranges when we compare, say, Windrush in 1948 to 2015.

In the twentieth century, the number of foreign-born people living in Britain increased by 20 per cent over some decades. By less than 10 per cent during others. But from 2001 to 2011, the number of foreign-born people living in the United Kingdom increased by over 50 per cent. We opened our borders to millions of people from Europe in 2004, and laterly, extended this to countries that previously didn’t enjoy this privilege. And now they’re coming in droves.

Tell me, how our NHS, how our schools, how our communities will cope if we allow another 120,000 people in a year – minimum? The truth is they can’t, and won’t.

Britain may not be physically bursting at the seams. The “we’re full” argument doesn’t necessarily apply to, and extend to physical space. But it does apply to our capacity to furnish people with the lifestyles that the British have worked hard for and rightly become accustomed to. The lifestyles that people like my parents, and indeed the people trying to come here now, are trying to enjoy.

And when we think about that toddler on the beach, when we think of the one in 25 people who will die trying to get to Europe, we should be thinking about how to stop this tragedy, and how to end the needless human suffering.

Firstly – we have to be honest. Our aid programmes and our interventions in the Middle East and North Africa have contributed to this mess.

But no greater blame can be attributed than that of the blame placed on the shoulders of European politicians.

In their long-standing attempt to create an “open” Europe, they have encouraged, and done nothing to discourage, this influx of people. It is why the politicians’ hearts are so heavy at the moment. They know this is a problem of their own making.

Telling the migrants to Germany that they will be accomodated won’t solve the problem. It will create new ones, and it will encourage more people – millions of people – to embark upon the same journies that these refugee pioneers have embarked upon. And what becomes of this?

More deaths. More resentment. More impact on the living standards of those in the host nations, and more changes to their countries’ demographics to the point where they may well – if they have not already – cease to be the places they grew up in.

This may seem like a flippant remark when considering the value of human life, and suffering and misery the migrants are experiencing. But there can be no positive developments down the line if millions manage to claim asylum in Europe. We have to stop them coming. And the first step is to make sure that refugee processing centres – proper ones – are set up and maintained not on the European homeland, but on the peripheries of Libya, and in Agadez, and anywhere else that large numbers of people congregate before making their final push onto the continent.

Only with this approach can we create the best of a thoroughly bad situation. And even then, let’s face it, it won’t be that good for many of them. I’m sorry.