Over the weekend there was another violent, coordinated mass invasion of train tracks in Calais. The migrants brought travel to a standstill, making it ten miles down the tunnel where fights occurred. Once again, according to statements from the Police and officials, it seems that British Anarchists based in Calais organised the insurrection.

On Saturday around 200 mainly Eritrean and Sudanese migrants stormed the Channel tunnel, breaking down expensive new fences and fighting with police, in what Eurotunnel services described as, “a massive invasion and intrusion by a very large and coordinated group of migrants.”

Several people were injured and around 23 arrests were made. The tunnel was completely closed for a time and delays were up to eight hours.

Good morning, due to an intrusion on our French terminal by a large number of migrants, our service is temporarily suspended. 1/2 ^LD

Over 20 people are still in custody for trying to get through the channel tunnel. #Solidarity 1/2

Gilles Debove, from the union Unite SGP-Police FO, said: “This is being encouraged not by human traffickers, who wish to remain discreet, but by extreme Left elements here to manipulate the migrants in the name of their ideal of imposing a country without borders or police.

“Among these activists are quite a few Britons.”

Eurotunnel Services added: “It’s clearly an organised attack when it comes in such a large number, there are over 100 in this one group. They arrived together and in a well-organised manner broke through the fences and all clearly knew where they were going.

“They ran through the terminal, knocking some staff to the ground and throwing stones at them. There are some minor injuries to staff and also two police officers. They were treated at the scene by paramedics.”

On the Calais Migrant Solidarity Blog, which is run by the group ‘No Borders’, left-wing activists accused the French Police of attempted murder: “Only two vans of gendarmes (French military police) were present, frantically driving back and forth for an hour gassing people and trying to run them over, but powerless to stop them.”

They defended the mass violence, arguing: “Action by migrants alone may not be enough to really shake the murderous border regime. Our power will be strongest when people with and without papers fight together.”

However, they denied they were responsible: “The ‘British anarchist’ line from the cops and journalists is insulting and deeply racist. We ‘No Borders,’ anarchists and others, are proud to stand in solidarity with our friends without papers. But these actions are theirs, they don’t need us to lead them or show them how to fight,” they wrote. 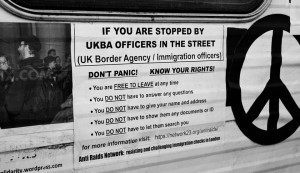 Referring to the anarchists, an emergency services spokesman in Calais told reports from the Daily Mail: “They were very clearly helping to break down fences and guiding the migrants in a co-ordinated attack.

“Fighting broke out with security guards, and we had to treat around ten migrants. Five ambulances were at the scene.”

In the first incident of its kind, nearly 2,000 migrants made a coordinated attempt to breach the tunnel in July. French Police became “convinced” that British anarchists were organising and leading break ins at the beginning of August, and later that month left-wing extremists from the group Stand Up To Racism led a confrontational march against the French Police.