The official government forecast for so-called asylum seekers arriving in Germany has risen again to 1.5 million, according to internal documents seen by Bild, Germany’s top-selling daily.

The new 1.5 million figure represents a remarkable increase from the previous official 800,000 figure announced in mid-August – just one and a half months ago. What has been quickly forgotten, and unreported by the mainstream media is that the August figure itself was a revision from 450,000, again a revision from the original estimate of 300,000 in June. In just five months, the German ‘asylum’ estimate has increased by a remarkable five times.

In contrast, the number of ‘assylum seekers’ who actually arrived in Germany in 2014 was around 200,000. The constant revisions and refusal to place controls on Germany’s borders will raise doubts over Germany’s ability to keep with it’s targets for 2016 and beyond to only admit 500,000 refugees a year. 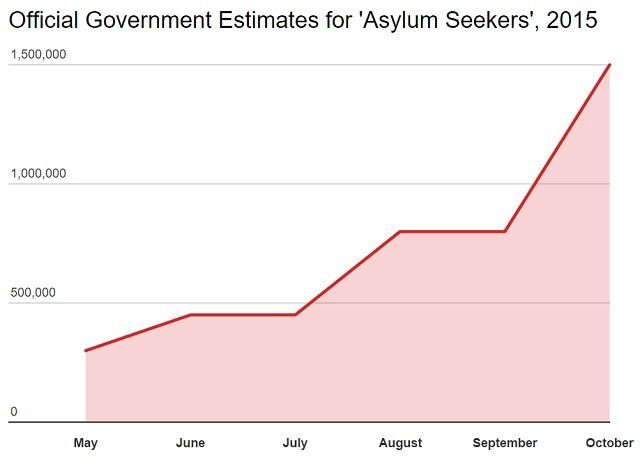 Reporting on the internal forecast seen by the paper they said was classed ‘confidentia’, Bild said the German authorities were concerned about the risk of a “breakdown of provisions” and that they were already struggling to procure enough living containers and sanitary facilities for the new arrivals.

“This high number of asylum seekers runs the risk of becoming an extreme burden for the states and municipalities,” the report said.

The authorities’ report also cited concerns that those who are granted asylum will bring their families over to Germany too, Bild said.

Given family structures in the Middle East, this would mean each individual from that region who is granted asylum bringing an average of four to eight family members over to Germany in due course, Bild quoted the report as saying.

German Finance Minister Wolfgang Schaeuble said on Sunday Europe needs to restrict the number of people coming to the continent.

Chancellor Angela Merkel, who said Germany would grant asylum to those fleeing Syria’s civil war, has recently seen her popularity ratings slump to a four-year low.

Reuters contributed to this report.