“Ooh look, it’s James Delingpole, the most hateful man in Britain. No I WON’T pose for a photograph with you, you piece of filth. Go away don’t touch me,” snarled an unhappy crusty-looking fellow, as I squeezed through the throng of protestors at entrance. I was dressed in black tie; they were dressed for the revolution.

“Join us! We’re your friends,” cooed three girls in blonde wigs and sparkly coal miners’ outfits handing out lumps of coal. (They weren’t really my friends. They were green activists too. But, like most of the renta-mob crowd, perfectly amiable) 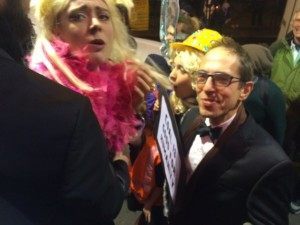 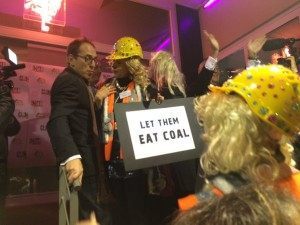 Then the police turned up and in characteristic no-nonsense French style forced the protestors to disperse before the stars – including 92-year old rocket scientist Fred Singer and Greenpeace co-founder Patrick Moore – in black tie arrived in their stretch limos and walked up the red carpet.

It was the perfect launch for Marc Morano’s climate skeptical movie Climate Hustle – the skeptics’ long-awaited answer to Al Gore’s An Inconvenient Truth – which staged its triumphant world premiere in Paris last night.

The protestors had come fresh from the COP21 climate conference, alerted by Wanted posters plastered by activists over the streets of central Paris warning them that seven of the world’s most evil fossil fuel lobbyists were in town to disrupt their holy mission to bomb the global economy back to the dark ages with carbon reductions, regulations and wealth redistribution.

In fact though – an irony lost on the protestors: they really don’t do irony, these people – it was the greenies who were doing all the disrupting.

Earlier in the day they’d tried to sabotage a conference of climate skeptics being hosted in central Paris by the Heartland Institute. (You can see the footage of the presentation – Examining The Data – here).

Now they’d come to jeer outside a film they’ll never watch made by people they won’t listen to presenting a message they’re ideologically incapable of comprehending.

If they ever did see Climate Hustle it would be totally lost on them.

Climate Hustle is the Anti Inconvenient Truth. It’s for people with an open mind who want to know what’s really going on with the world’s climate – as opposed to what hucksters like Al Gore want to persuade them is going on with the world’s climate – all backed up with hard data and evidence presented by scientists who know and understand, among them the Nobel-prize-winning Norwegian physicist Ivar Giaever.

Its message ought not to be dynamite, for it is no more than basic science and established fact.

But Climate Hustle is dynamite – at least it will be to most viewers, especially younger ones – because what it says is so totally at odds with almost every documentary, TV programme and film that has ever been made on the subject of global warming. (Apart from Martin Durkin’s The Great Global Warming Swindle, climate skeptical documentaries are pretty much non-existent).

Man-made climate change – most especially the notion that global temperatures can be turned on and off by tiny alterations in the quantities of the trace gas carbon dioxide – is nothing more than a green fantasy being used as an excuse for a money making scam by corporate shysters, a wealth redistribution scheme by the Third World, and as a power grab by one world government freaks.

One of the key myths it demolishes is the one established by Al Gore in his pimped-up power point lecture, An Inconvenient Truth, where he climbs onto a scissor lift to show how dramatically – and apparently unprecedentedly – CO2 levels have risen in the late Twentieth Century with inevitably disastrous consequences for the planet.

This scaremongering claim by Gore is a perfect example of what presenter Marc Morano means by the “Climate Hustle”: just like in a card game where tricksters use sleight-of-hand, distraction techniques, and dirty tricks in order to con the mark (the mug punter) out of his money, so the alarmist establishment is withholding key details and presenting false or distorted information in order to extract vast sums from the gullible public.

In this case, the details that Gore isn’t giving us are

2. Current carbon dioxide levels are minuscule compared to what they were in our deep geological past. As several earth scientists testify in the movie, our planet is – in terms relative to the past – “CO2-starved”.

Also, in historical terms, we are living through a cold period not a warm one. This is true of both the long term geological record and also of more recent history. Until green activists like Michael Mann started cooking the books with dodgy artefacts like the “Hockey Stick” it was a widely accepted fact among climate scientists that the earth was warmer during the Medieval Warming Period (when there were no passenger jets or 4x4s or Chinese building coal-fired power stations every five days) than it is today.

One of the most powerful sections of the documentary is the one where various scientists and academics who have dared speak the truth about global warming describe how they have suddenly found themselves ostracised by their peers.

Among them is Judith Curry, former chair of the School of Earth and Atmospheric Sciences at the Georgia Institute of Technology, who describes 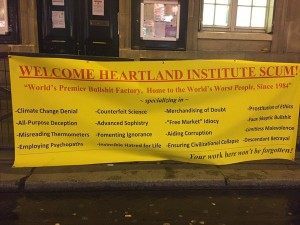 how she lost her faith in the alarmist establishment at the time of the Climategate emails, when climate scientists were caught red-handed in emails conspiring to withhold scientific information from their peers. She was subsequently branded a heretic.

Another one is Sallie Baliunas, an astrophysicist at the Harvard-Smithsonian Center for Astrophysics. She was viciously traduced and ostracised by her peers for questioning so-called “consensus” climate science. In the film she draws parallels with witchcraft trials in 13th century France where witchcraft was declared the most urgent threat to mankind of all and where anyone who dared 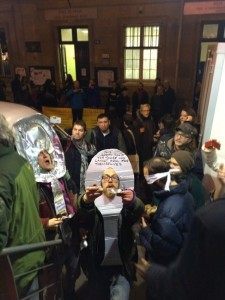 disagree ran the risk of being declared a sorcerer and rejected – or worse – by mainstream society.

Another is Caleb Rossiter, a left-leaning statistician at American University, who spoke out against the alarmists when he discovered that their statistics were junk and that the measures being introduced to “combat” climate change were harming the world’s poorest. For his troubles, Rossiter had his fellowship at the US Institute for Policy Studies terminated.

By the end of this jaunty, likeable, fact-rich journey through the history of the “global warming” the viewer will be left in no doubt that climate change is one of the most egregious political and scientific hoaxes in history.

Morano – even if he does look and dress a bit like a junior Mafiosi – makes a funny, engaging, no-nonsense presenter.

The science is unimpeachable.

I only spotted two mistakes: no Canute did not think he could stop the waves (quite the opposite actually) and no he is not, as unfortunately billed in the closing credits,  “Prince Charles of Wales.”

But I’m being pernickety here. Climate skeptics operate on a fraction of the budget available to Big Green (which, it has been calculated, has 3,500 times more money than skeptics and is an industry worth in excess of $1 trillion a year). So if it’s clunky in places, that’s just part of its rough-hewn charm.

Every person who has ever been exposed to the lies of An Inconvenient Truth should watch Climate Hustle immediately afterwards an antidote.

Finally a prediction: Climate Hustle is not going to win a prize at Sundance (where it won’t be screened if greenie Robert Redford has anything to do with it), nor will it win an Oscar from a Hollywood swarming with green activists like Leonardo di Caprio and Mark Ruffalo.

But the prizes it is not going to win should be considered a point in its favour, not as a sign of weakness. As George Orwell said: “In a time of universal deceit, truth-telling is a revolutionary act.”