A private letter from Margaret Thatcher to a prominent Eurosceptic MP lays to rest any argument that the former Prime Minister would have campaigned to remain in the European Union (EU) in the upcoming referendum.

The letter, sent by Margaret Thatcher to the veteran Tory MP Sir Bill Cash in March 1993, was written shortly after the modern European Union was established with the adoption of the Maastricht Treaty. Sir Bill, one of the former Prime Minister’s most loyal supporters, says it shows it would be “simply inconceivable” that Lady Thatcher would have supported Prime Minister David Cameron’s proposed deal on renegotiated membership.

The letter shows Lady Thatcher had no sympathy with political and economic union as envisaged by the EU, reports The Daily Mail. It is a short and precise statement of her position which does not lend itself to interpretation. It reads, in full:

I understand it is being suggested in some quarters that I would have agreed to the Maastricht Treaty. May I make it clear that I would NOT [underlined] have done so.

In my view it is contrary to British interests and damaging to our Parliamentary Democracy.

Sir Bill’s letter bluntly contradicts the recent assertion made by Lord Powell — Lady Thatcher’s chief policy adviser in the mid-’80s — that despite the fact her “heart was never in our membership of the EU” she would have “gone along with what is on offer” now. 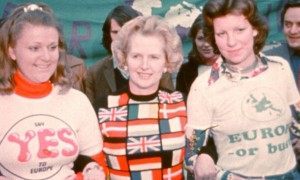 Lady Thatcher was not always an opponent of the European project. In 1975 she campaigned (pictured right) for continued membership of what was then called the European Economic Community (EEC). However, Sir Bill’s letter shows that by the time the EEC had become the EU her outlook had changed.

Explaining why he felt the need to speak out against Lord Powell’s controversial claim, Sir Bill said:

“I was very disturbed and deeply concerned that somebody who knew her so intimately should believe that she would have gone along with what is a completely undemocratic project. It is just inconceivable.”

Although the letter was private, Sir Bill says Lady Thatcher told him he was to produce it “any time when there was a serious question about whether or not she would have signed up to the European project.” He added:

“It is inconceivable she would not have wanted to leave the EU. If you are going to veto Maastricht, you are saying you are not going to go ahead with the European project.

“She gave the letter to me for a specific purpose and she had trust in me that I would do what she wanted. I am now doing that. There has never been the same degree of necessity to (release it) as there is now.”