A woman from Belfast has been handed a six-month suspended jail sentence for “joking” about harming Muslims on a Facebook page.

Victim Dr. Raied Al-Wazzan, who has previously praised Islamic State terrorists, claimed the comments put his life in danger. Defendant Anne Bothwell denied the messages were harmful and insisted they were written in humour.

Ms. Bothwell was found guilty of six counts of improper use of a public electronic communications network, with Belfast Live reporting that she is preparing to appeal the ruling.

Dr. Al-Wazzan was also the chief witness behind the attempted prosecution of Christian Pastor James McConnell for making “offensive and disgusting” comments whereby he called Islam a “satanic cult” in a sermon broadcast online.

In January this year, a judge not only found that the Pastor had not committed a crime, he described him as “passionate” and reaffirmed that “it is not the task of the criminal law to censor offensive utterances”.

However, following the verdict, the Belfast Islamic Centre, of which Dr. Al-Wazzan is the executive director, called for a blasphemy law making it illegal to “insult… others’ faith and beliefs”.

Dr. Al-Wazzan also used the publicity generated by the James McConnell case to lobby for taxpayer money to be spent on land for a new mega-mosque. On several radio appearances in relation the pastor’s comments, he used the airtime to call for free land for an “Islamic community centre”. 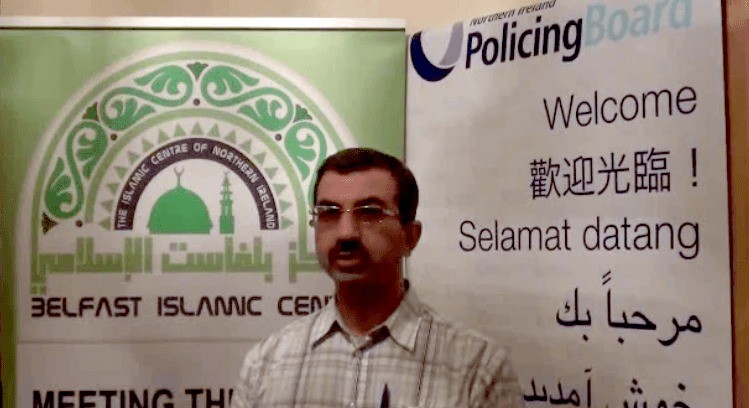 Dr. Al-Wazzan speaking about a Policing Board Muslim Engagement Meeting

Following all this, Dr. Al-Wazzan found a vicious post on a Facebook page called Protestant Coalition, featuring a picture of him at a pro-mass migration rally and allegedly calling for Muslims to be shot and sent to gas chambers.

Ms. Bothwell told the court the post was a joke, claimed her comments were taken in the wrong context and insisted she has Muslim friends. She also said she had been upset about Pastor McConnell being taken to court by Dr Al-Wazzan,

However Dr. Al-Wazzan said the online comments had put his life under threat and resulted in him carrying out checks to see if he was being followed.

In 2015, Dr. Al-Wazzan said that Mosul, where Islamic State (IS) jihadists have murdered or expelled all of the city’s 2,000-year-old, 60,000-strong Christian community, is “the most peaceful city in the world” and that “[IS are] less evil than the Iraqi government”.

Speaking live on BBC Radio Ulster’s Talkback show, he continued: “Islamic State came to protect a section of society that had been marginalised, and foreign policy had pushed part of society to reach this point.”

He has since apologised for the remarks and was not charged for appearing to support the genocidal terror group who are prescribed under UK law.

The number of people prosecuted for social media post in the UK has shot up recently, and the number is likely to increase further.

Earlier this week, the office of London’s first Muslim mayor announced they had secured millions of pounds to fund a police “online hate crime hub” to work in “partnership with social media providers” to criminalise “trolls” who “target… individuals and communities.”

And in May this year, the EU announced that Facebook, Twitter, YouTube and Microsoft had “committed” to working more closely with them and national governments and “their law enforcement agencies” to help “criminalise” perceived “illegal hate speech” online.