BERLIN (AP) — Police say some 100 officers had to get between far-right Germans and asylum-seekers who were fighting in the eastern German town of Bautzen.

Bautzen police spokesman Thomas Knaup said Thursday around 80 Germans and 20 migrants were attacking each other Wednesday night on a market square.

Police had to separate the groups and were attacked with bottles by some of the asylum-seekers. 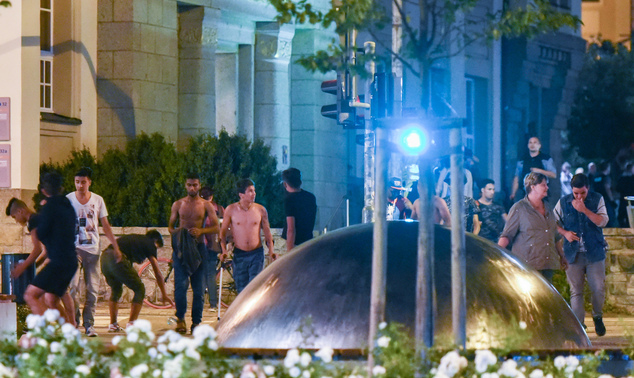 In this Sept. 14, 2016 photo refugees and asylum-seekers stand on the square by the Kornmarkt shopping center in Bautzen, Germany. Police reported verbal and violent attacks have erupted between about 80 far-right activists and about 20 young asylum seekers. (Christian Essler, XCITEPRESS/dpa via AP)

The far-right protesters were shouting nationalist slogans and followed the asylum-seekers back to their shelter while police tried to keep the groups separated. Later, some of the far-right group threw stones at an ambulance preventing it from getting close to the shelter to attend to an injured migrant.

In February, onlookers celebrated as fire damaged a former hotel that was being turned into a refugee home in Bautzen.