European Union (EU) leaders have used a summit with President Barack Obama in Berlin to reaffirm sanctions against Russia and snub Donald Trump on globalisation, NATO, and climate change.

On Thursday, Mr. Obama implied Mr. Trump was not “serious” about his position on NATO after meeting German Chancellor Angela Merkel on his European farewell tour, which concluded Friday.

On the last day of his tour, the leaders said they were committed to the widely despised Transatlantic Trade and Investment Partnership (TTIP) and Mr. Obama’s approach to foreign policy and terrorism in the Middle East. This is in contrast to the president-elect, who has questioned accepted orthodoxies on the issues.

“The leaders agreed on the necessity of working collectively to move the transatlantic agenda forward, particularly on bringing stabilization to the Middle East and North Africa, as well as securing diplomatic resolution to the conflicts in Syria and eastern Ukraine,” the White House said in a statement.

“The leaders also affirmed the importance of continued cooperation through multilateral institutions, including NATO,” the White House added. 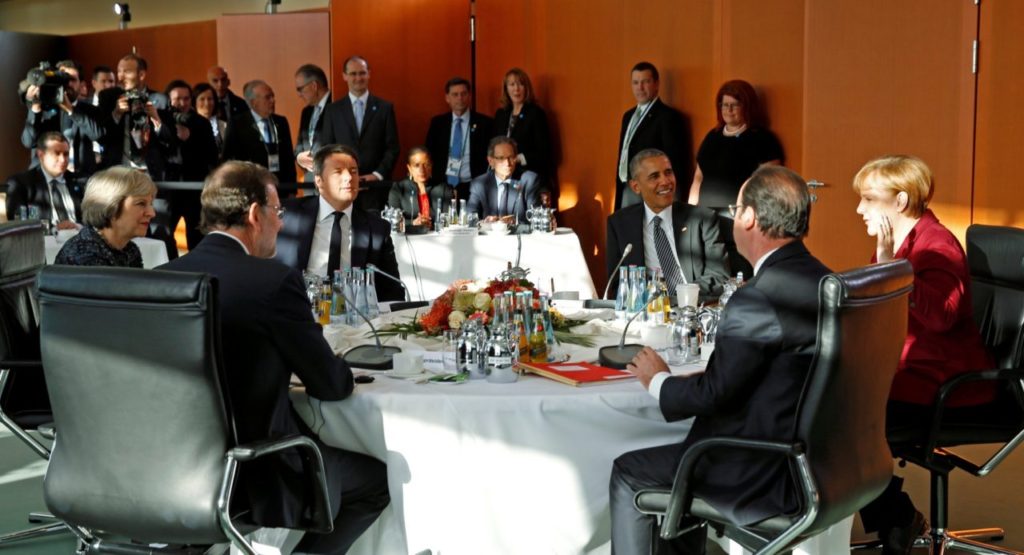 The EU and President Obama are enthusiastic in their support for climate change deals and free trade agreements and are steadfast in their refusal to engage with Russia on the Middle East.

On Thursday, the president and German chancellor penned a joint op-ed, claiming, “Our countries share a joint responsibility to protect and preserve our way of life” and a “commitment to personal freedom and dignity, which only a vibrant democracy under the rule of law can guarantee.”

“Our deep respect for human dignity compels us to provide humanitarian relief and aid for millions of refugees worldwide… and U.S.-German partnership was essential to achieving a global agreement in Paris that offers the world a framework for protecting our planet,” they added.

He has also insisted European NATO members meet their duty to spend 2 per cent of GDP on defence, hinted at working alongside Russia to defeat Islamic State in Syria and Iraq, and promised to heavily vet migrants from terrorist regions of the world.

On Thursday, President Obama implied Mr. Trump would change his policy on some issues after a meeting with the German chancellor.

“There’s something about the solemn responsibilities of that office … that forces you to focus, that demands seriousness,” he said. “And if you’re not serious about the job, then you probably won’t be there very long. Because it will expose problems.”

Mr. Trump also backed Brexit and has railed against the EU’s liberal agenda. However, Mr. Obama told reporters the supranational institution is “one of the world’s great political and economic achievements,” according to Die Welt.