The British government will on Monday seek to overturn a ruling that it must obtain parliamentary approval before triggering Brexit, in a highly-charged case in Britain’s highest court.

For the first time ever, all 11 Supreme Court judges will convene for the four-day hearing which threatens to upset May’s timetable for leaving the European Union.

MPs are currently debaing a government motion to trigger Article 50 by the end of March 2017.

UPDATE 1425 GMT As others focus on the legal intricacies, the Telegraph takes a different angle

UPDATE 1415 GMT Schedule for the rest of today

Court has resumed from lunch. Dominic Chambers QC is concluding his remarks on behalf of hairdresser Deir Dos Santos.

At 2.30pm when David A Scoffield QC will argue on behalf of Northern Ireland campaigners Stephen Agnew and Raymond McCord. They claim the Northern Ireland Assembly needs to give consent before Article 50 can be triggered.

At 3.15pm James Wolffe QC, Lord Advocate of Scotland, will argue on behalf of the Scottish Government that the Scottish Parliament needs to give consent.

UPDATE 1405 GMT Parliament will get a vote on Brexit deal

Brexit Secretary David Davis says Parliament WILL get a vote on the final deal once it is secured.

Spotted outside the Supreme Court this morning. 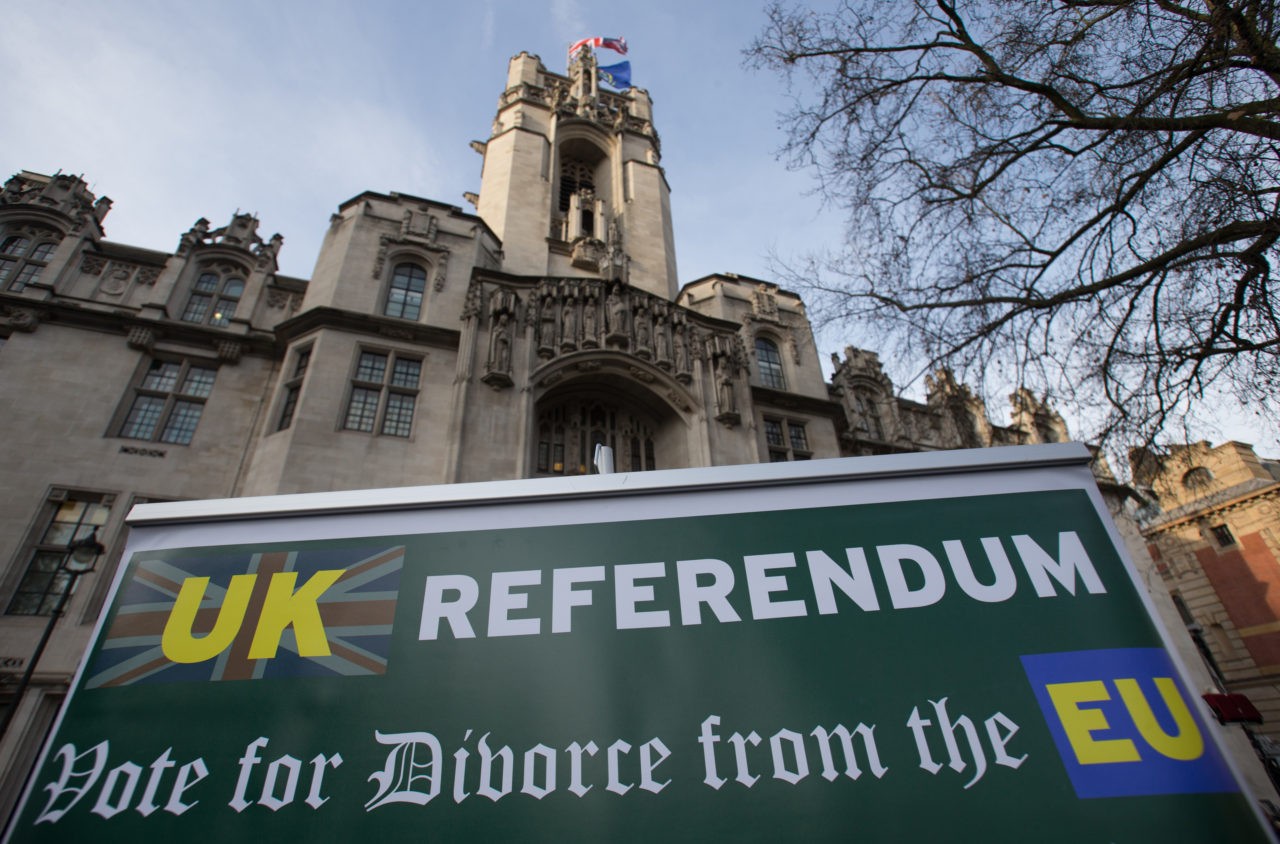 The court begins day three. Lord Pannick continues to present the case for the anti-Brexit side.

The court rises for the day

Pannick's Reason 1: The referendum act doesn't give ministers prerogative to trigger Article 50 – doesn't mention it at all

Pannick's Reason 2: Ministerial prerogative is used to enter into treaties (such as EU membership) but can’t be used to change constitution

Pannick's Reason 3: Gov must demonstrate Pary expressly handed over powers to ministers to supercede legislation. It hasn’t over Brexit.

Pannick's Reason 4: Parliament did not intend the 1972 Act to create ministerial prerogative power to sweep away EU membership

Pannick's Reason 6: None of the European Union-related acts created over 40 odd years give ministers power to trigger Article 50

Pannick’s Reason 7: Only an Act of Parliament can take away the rights linked to the EU that have been created since 1972 membership

He says he has seven reasons why the government is wrong. This could be a long afternoon. 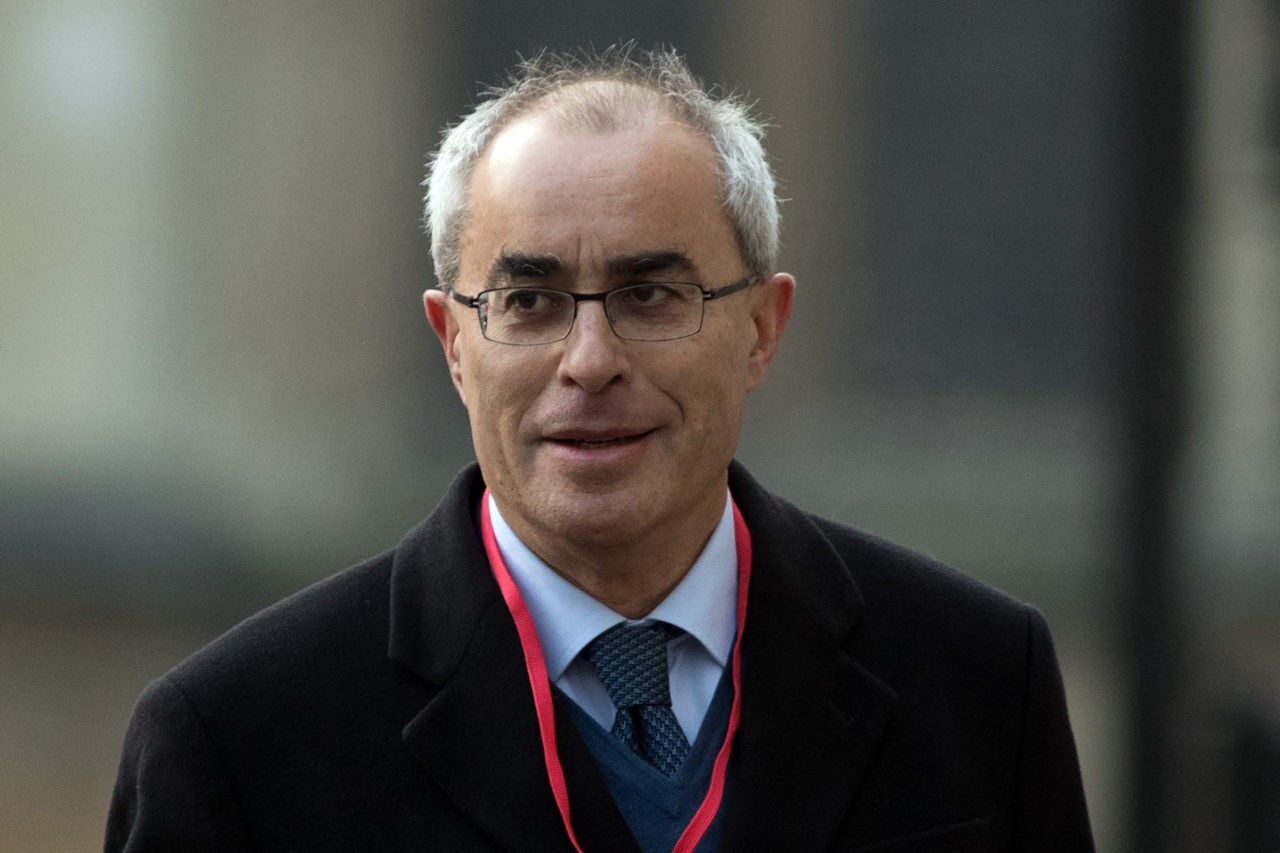 Lord Keen represents the UK government in Scotland, rather than the Scottish government. He is arguing that the Scottish parliament has no veto over Brexit as foreign affairs were never devolved to it.

UPDATE 1300 GMT Photographs from this morning 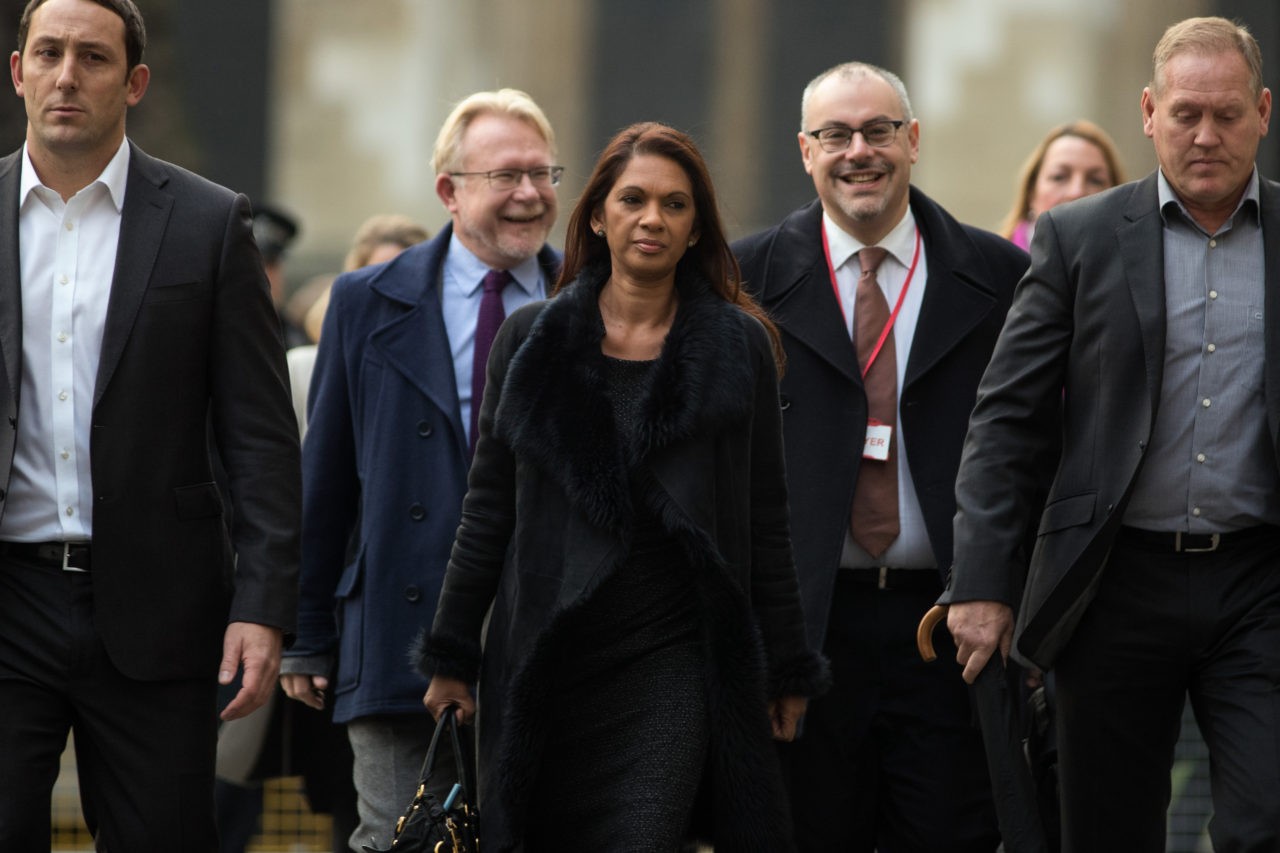 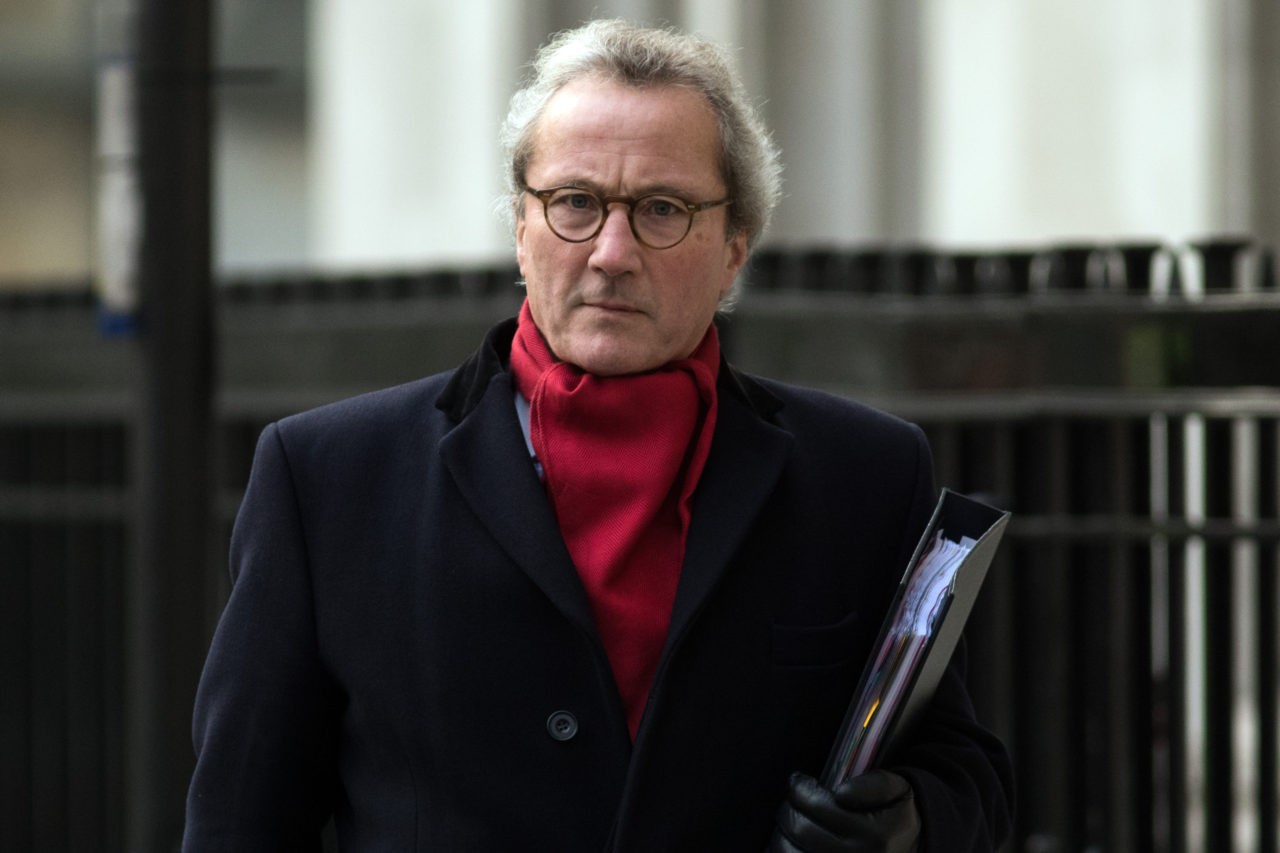 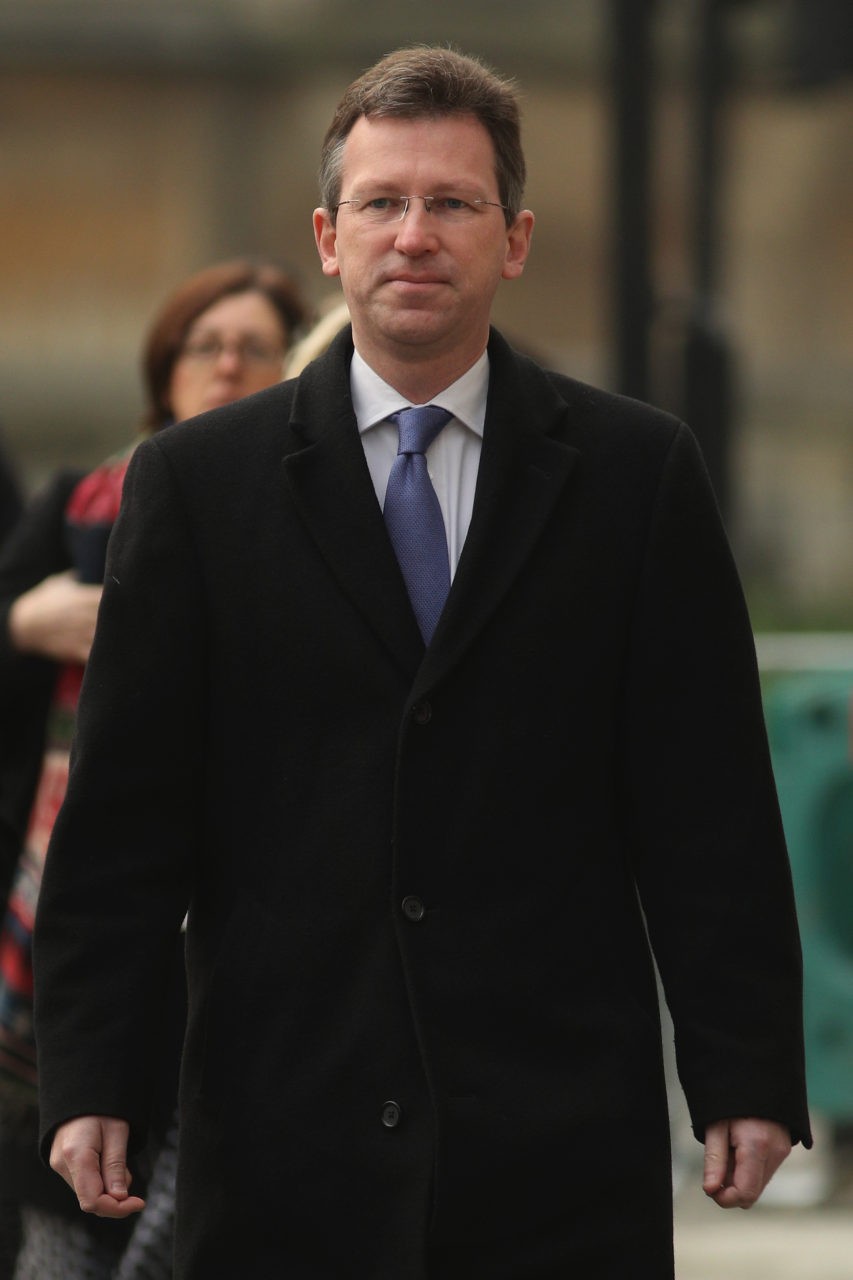 The court has begun sitting again for day two. The government is continuing to present its case.

The court has risen for the day. The case continues tomorrow morning.

UPDATE 1620 GMT – For the confused, here’s how the Supreme Court judges are actually chosen 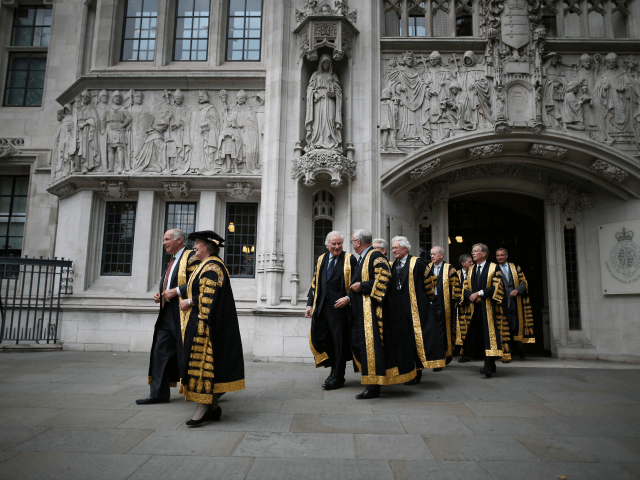 The UK Supreme Court is a new invention, having only existed since 2009 after being established by the 2005 Constitutional Reform Act.

Before then, Britain’s most senior judges sat in the House of Lords, where they were known as Lords of Appeal in Ordinary (or “Law Lords” for short). All judges appointed to the court are still awarded peerages, although they are not allowed to sit or vote in the House of Lords during their tenure.

New appointments are not subject to anywhere near the same scrutiny as U.S. Supreme Court justices, facing no questioning or confirmation vote by any elected body.

Instead, they are chosen by a Selection Commission, headed by the current President of the court, alongside another senior judge and representatives from the judiciaries of England and Wales, Scotland, and Northern Ireland.

The court is therefore selected largely by the legal establishment, with public scrutiny over appointments near impossible, especially as it does not even publish the Selection Commission’s deliberations.

EadieQC under pressure. Lords Wilson, Mance & Sumption challenge him over assertion that ministers have power to sweep away EU membership

Lord Mance says there's a "huge difference" between changes to the rules of the club and deciding not to be a member of the club.

UPDATE 1500 GMT – As lawyers debate the finer points inside…

Protesters wave some colourful placards outside. 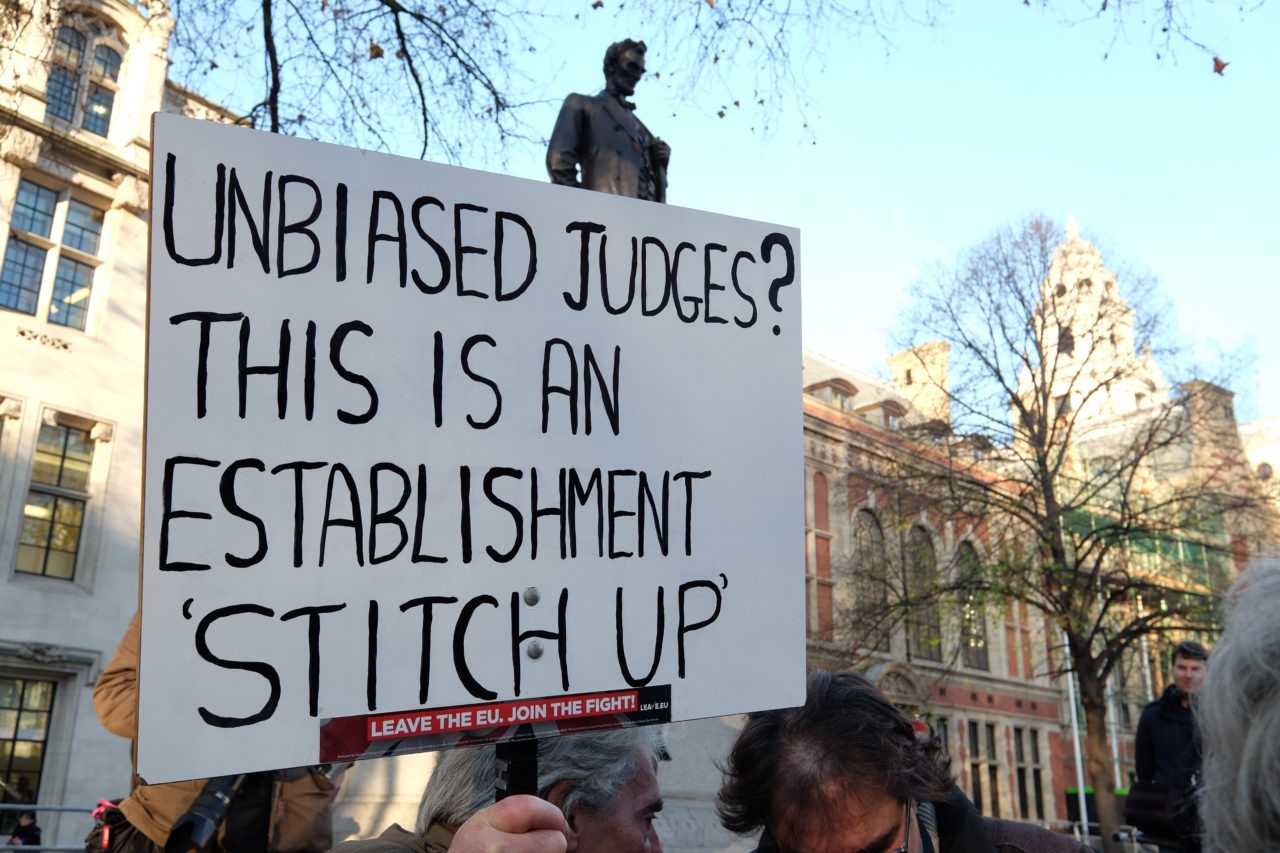 Government QC James Eadie has continued his case, saying that the European Communities Act 1972, which took Britain into what was then the EEC, did not restrict the government’s ability to invoke the Royal Prerogative to take Britain back out again.

However, in response the judges have asked why if joining the EEC was a joint effort between Parliament and the  executive, leaving cannot be.

UPDATE 1420 GMT – More photographs from outside the court

By Rachel Megawhat for Breitbart London 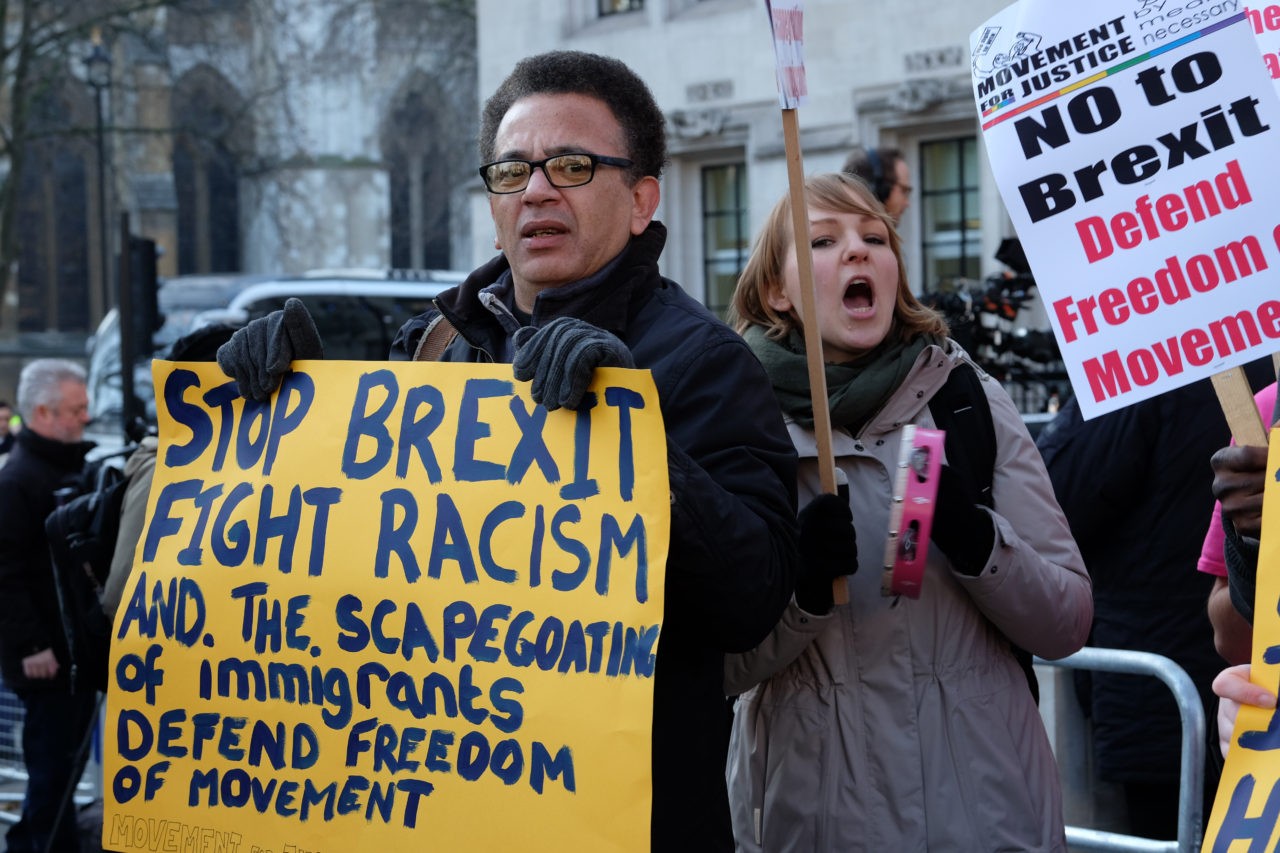 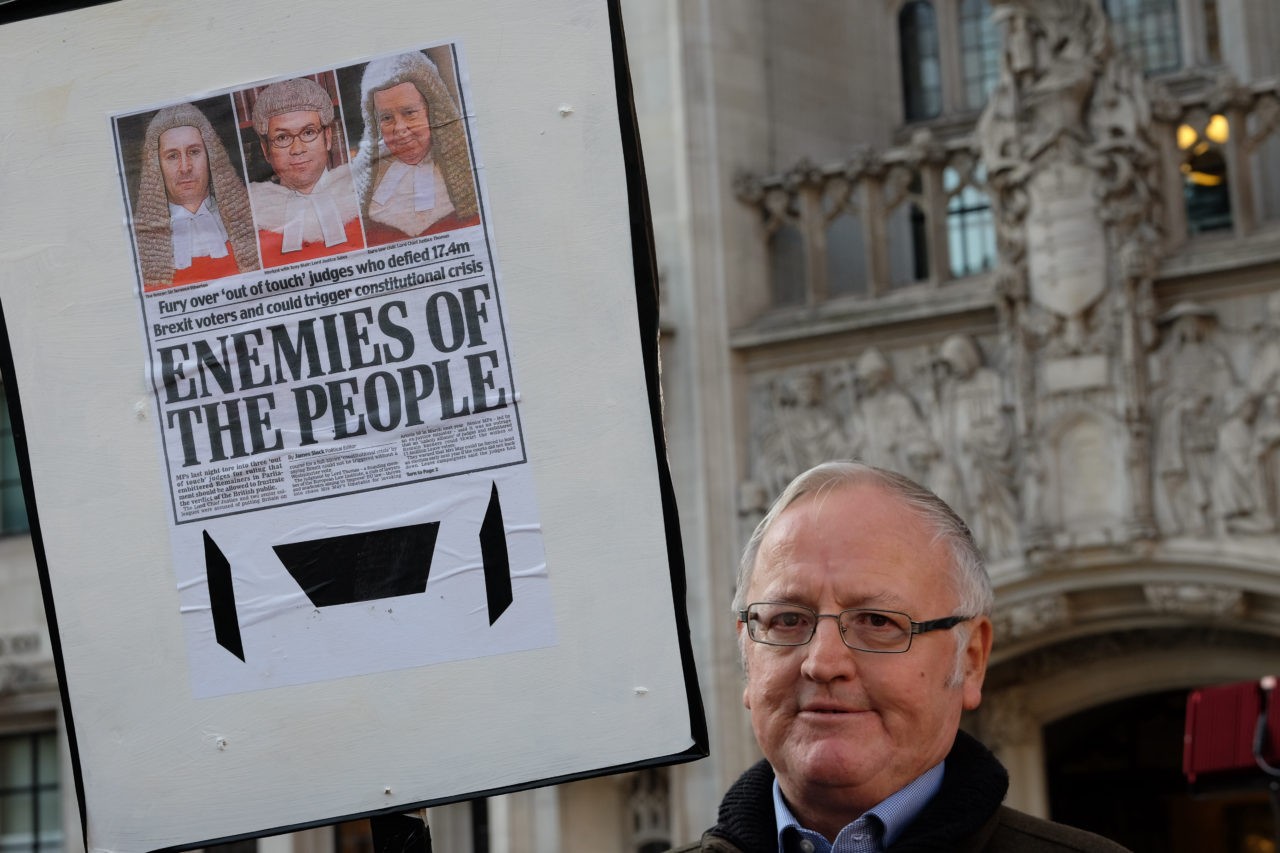 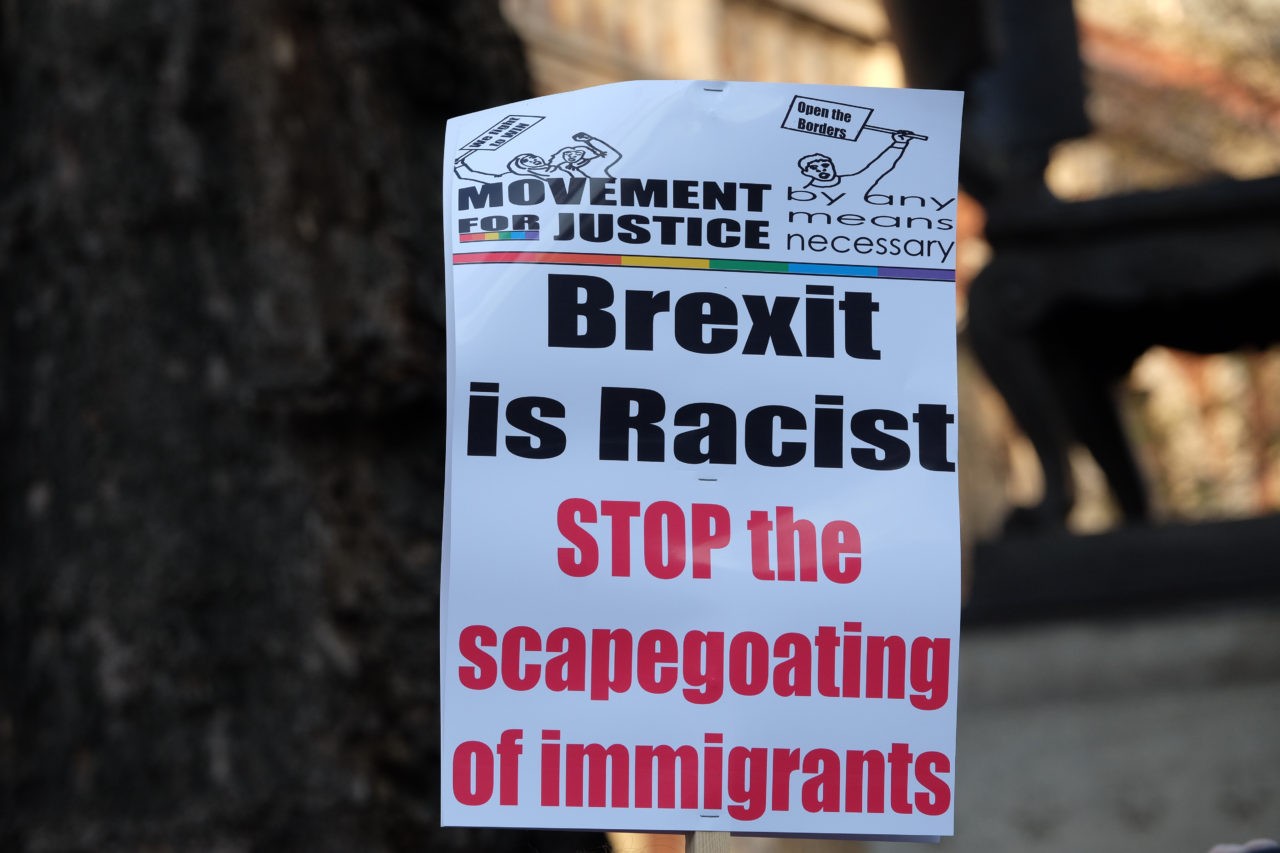 This is without a doubt the biggest UK court case to ever be televised.

TV cameras, photographers and audio recording are traditionally not allowed inside UK courts. This case is a rare exception.

UPDATE: 1400 GMT – Our photographer has been outside 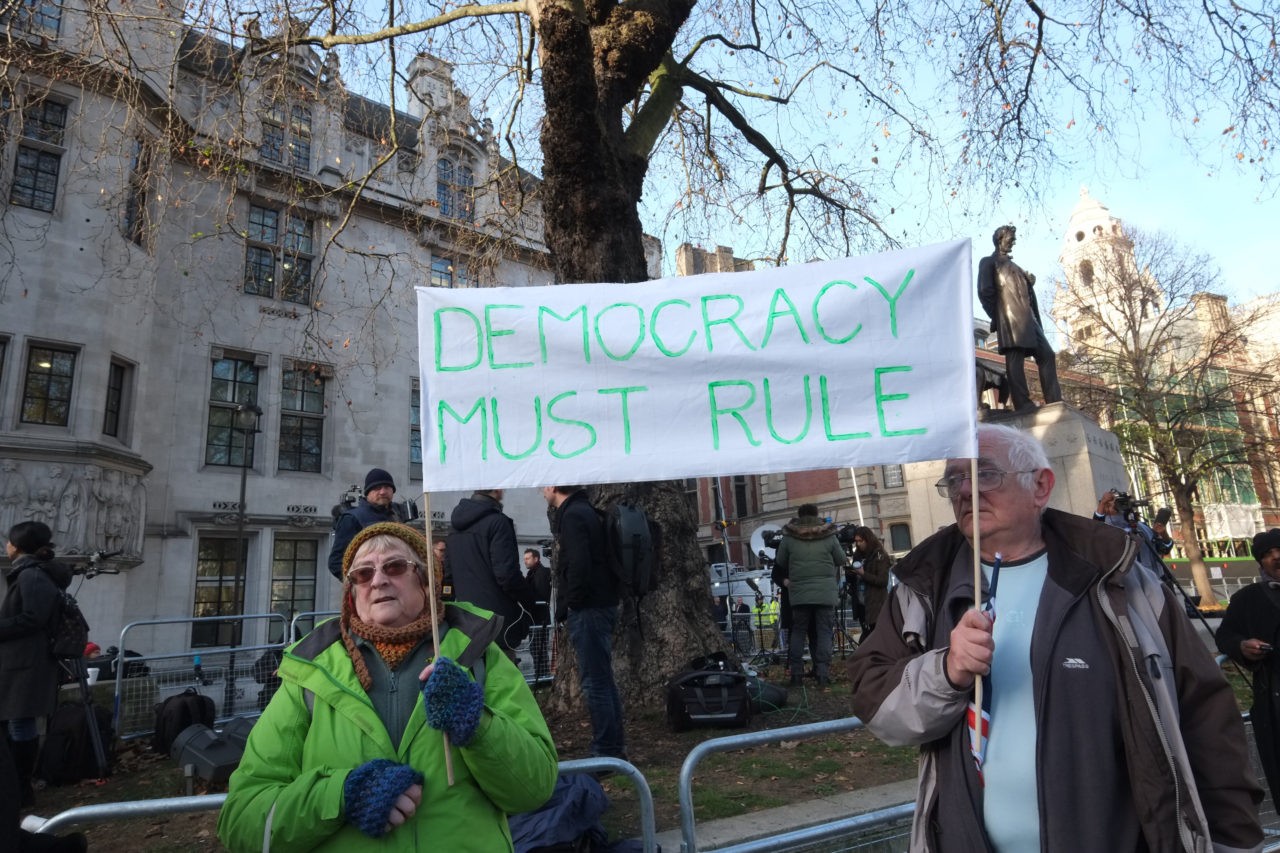 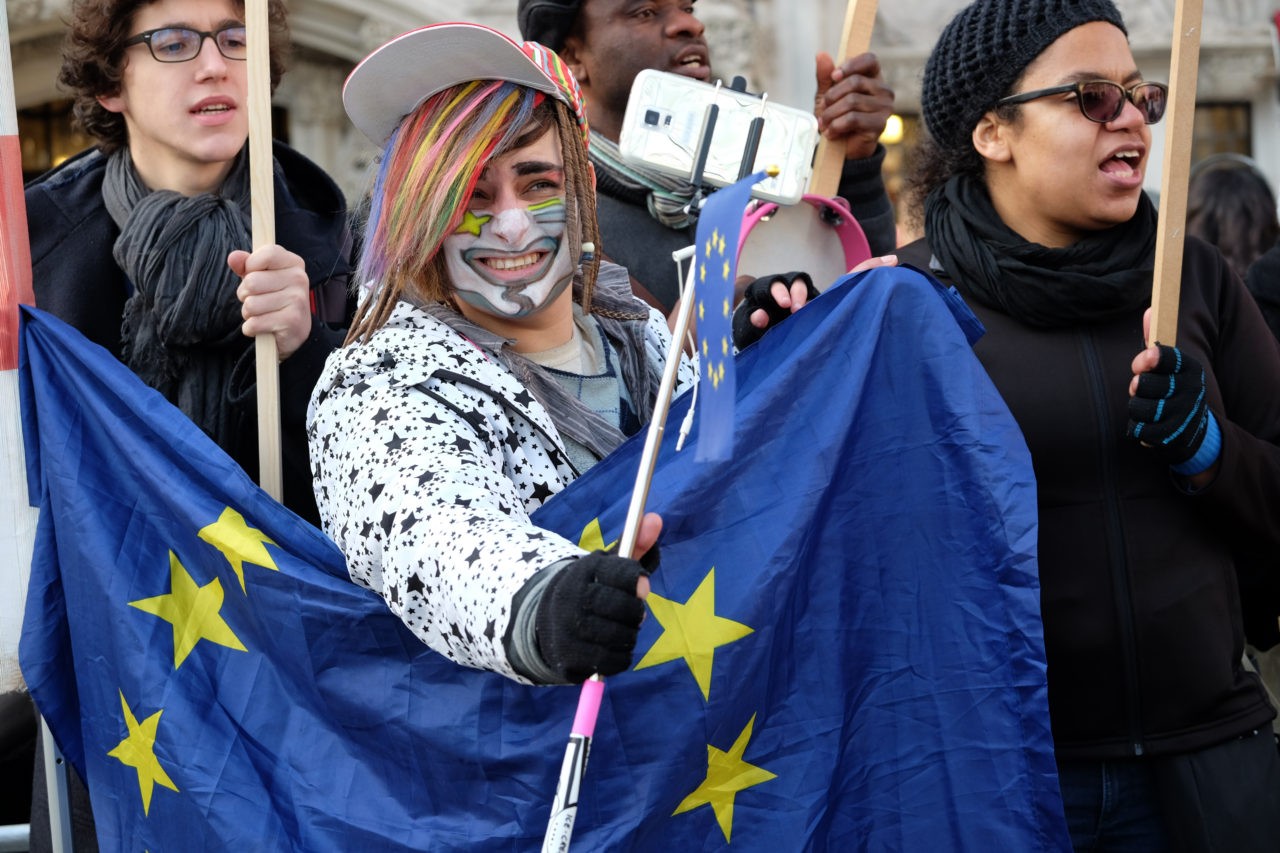 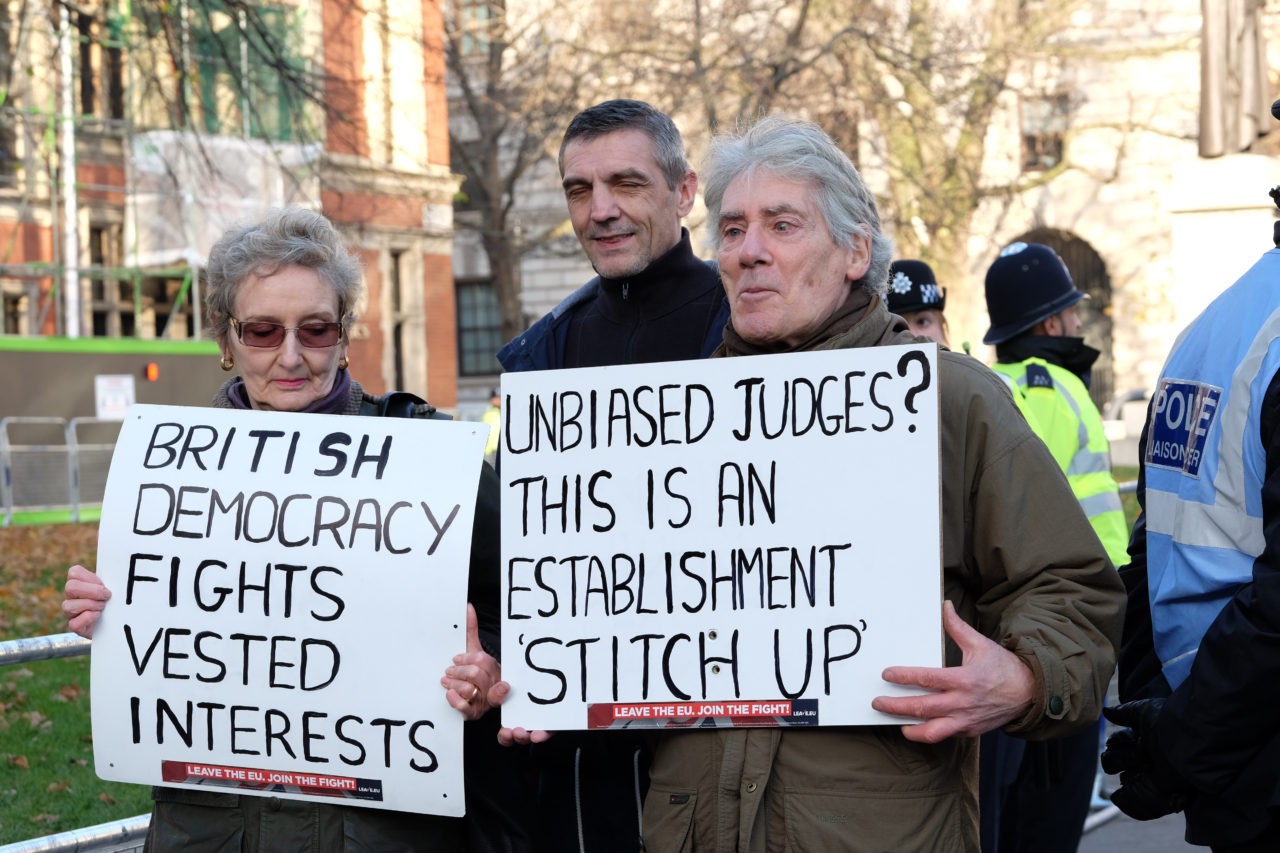 He said that parliament will have already been “fully and consciously involved” when the government triggers Article 50, and that the government’s use of the Royal Prerogative will therefore be lawful.

He added there was “great constitutional significance in which there is understandable and legitimate interest both inside and outside this courtroom”.

The High Court ruled last month that the government did not have the executive power alone to invoke Article 50 of the European Union’s Lisbon Treaty, formally starting the exit negotiation process.

The decision enraged Brexit supporters and some newspapers who accused judges of thwarting the will of the 52 percent who voted “Leave” in a June 23 referendum.

A parliamentary vote on Article 50 could open the door to pro-Europe lawmakers delaying or softening Britain’s withdrawal from the bloc.

May’s government will set out its case Monday in an appeal of the High Court decision, with a verdict expected in January.

Attorney General Jeremy Wright, the government’s chief legal advisor, will argue that the government has constitutional authority over foreign affairs, including the right to withdraw from treaties, under so-called “royal prerogative powers”.

In papers submitted to the Supreme Court ahead of the hearing, Wright said High Court judges were “wrong to relegate, almost to a footnote, the outcome of the referendum”.

Claimants in the case, led by investment fund manager Gina Miller, argue that triggering Article 50 would strip British citizens of certain rights established under European law — which they say only parliament has the power to do.

Britain’s foreign minister, Boris Johnson, voiced confidence in the government’s case Sunday, telling the BBC’s Andrew Marr Show: “There is no history in any EU negotiations or any EU treaty talks of the House of Commons doing anything to fetter the discretion of the government.”

However, legal expert Michael Zander, a professor at the London School of Economics and Political Science (LSE), said the government had little chance of winning, describing the original ruling as “unanimous and very strong”.

“In my view, the government could be looking at losing 11-0,” he wrote in legal magazine Counsel.

If it does lose, the government is expected to introduce a short bill — reportedly comprising just three lines of text — which it will seek to push rapidly through parliament to authorise the triggering of Article 50.

May has insisted a parliamentary vote on the legislation would not disrupt her plans to trigger Article 50 by the end of March 2017.

However, the opposition Labour Party delivered a blow to the government Saturday when it announced it would seek to amend any bill, potentially delaying the process.

“When the Article 50 debate comes up, we will put forward an amendment to it, which will be on the issues of market access and protections. We want those to be part of the negotiation,” Corbyn told Sky News.

He denied that the party was seeking to prevent the government invoking Article 50 altogether, adding: “We are respecting the result of the referendum. It might not be the one we wanted but it’s the one we’ve got.”

A spokesman for May’s Conservative Party accused Labour of attempting to “frustrate the will of the British people by slowing down the process… and trying to tie the government’s hands” in Brexit negotiations.

May faces a further potential complication at this week’s hearing from representatives of Scotland, Wales and Northern Ireland who will argue that Article 50 also needs to be approved by the devolved parliaments.

Such a ruling could further derail the prime minister’s timetable and set up a stand-off between the nations.