The number of Brits who say they actively do not believe in any god or higher spiritual power has shot up five points, from 33 to 38 per cent in a single year despite the continuing ascendancy of Islam.

The annual poll of 1,595 adults, taken on December 18th and 19th, also found that people who voted against Brexit were much more likely to have no faith, with 45 per cent of not believing in any god or spiritual being, against 35 per cent among those who voted to leave the European Union.

Along with the increasing number of active disbelievers, the YouGov poll for The Times uncovered a four-point decline in the proportion of people who say that they do believe in God, from 32 per cent in February last year to 28 per cent today.

However, the proportion of people who did not believe in god but said there might be some kind of spiritual power remained static at 20 per cent, and 14 per cent of people said they did not know.

According to The Times, the fall in faith is part of a long-term trend, with just 15 per cent people declaring themselves to have “no religion” in 2011, rising to 25 per cent in 2015.

The decline may be driven by the collapse of the Church of England and other traditional denomination, as the number of Mosques and Pentecostal churches booms as mass migration continues at near record levels. 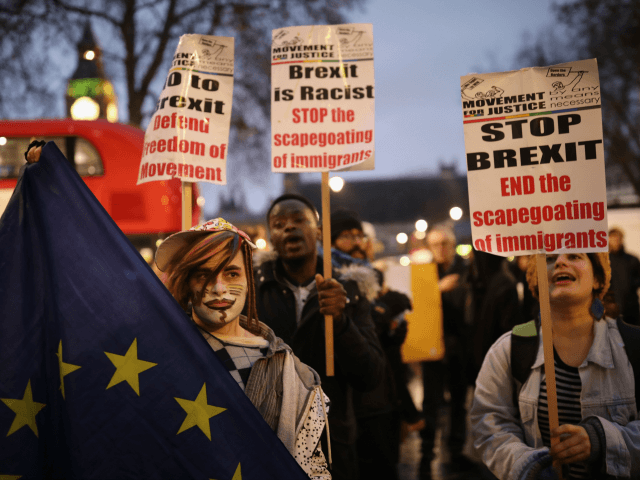 The stark decline in faith revealed by the poll follows the publication of a Government report into integration in the UK at the beginning of this month, which revealed a massive rise in the number of Muslims in the UK.

According to the Casey Review, between 2001 and 2011, those following the Muslim faith rocketed by 72 per cent, whilst the number of Christians simultaneously fell from 40.2million to 36.1m, with further declines projected.

The report explained that, “there has been a significant shift in the religious landscape of the nation, with a reducing number identifying themselves as Christian, more people saying they hold no religion and more diverse and growing minority faith populations, of which Muslims are the most prominent.

It continued: “This increase in the diversity of faiths and beliefs in the UK has increased the visibility of tensions between religious groups and the presence of more visible signs of religion, for example in the growth of mosques, and led to increased anxiety – which has not been sufficiently acknowledged or discussed.

“We remain predominantly religious, with nearly seven out of 10 of us belonging to a religion.

“The number of people belonging to the other main religions grew, with the exception of the Jewish population which remained around the same size.

“Among faith groups the number of people identifying themselves as Muslim grew most significantly, by 1.2m people.

“This 72 per cent increase is higher than for any other religious group and Muslims make up the largest non-Christian religious population in the UK at 2.8m in total, compared with 0.8m Hindus, 0.4m Sikhs, 0.3m Jews and 0.3m Buddhists.”