VALLETTA (AFP) – European Union leaders agreed a plan to curb mass migration from Libya at a special summit in Malta Friday that was overshadowed by the challenges of Donald Trump and Brexit.

Faced with a surge in migrants this spring, the 28 leaders backed steps including helping the Libyan coastguard to stop boats to Italy and setting up temporary camps in the north African state.

But they will also, without Prime Minister Theresa May, discuss the future of the bloc at a turning point with Britain set to leave, and an increasingly difficult geopolitical situation with the new US administration.

French President Francois Hollande lashed out at Trump, who has predicted that other countries will follow Britain out of the EU and branded the transatlantic NATO military alliance obsolete.

“It is unacceptable that there should be, through a certain number of statements by the president of the United States, pressure on what Europe should or should not be,” Hollande said as he arrived at the summit.

German Chancellor Angela Merkel meanwhile said Europe “has its destiny in its own hands” as it deals with a US administration that seems ambivalent to Europe and NATO. 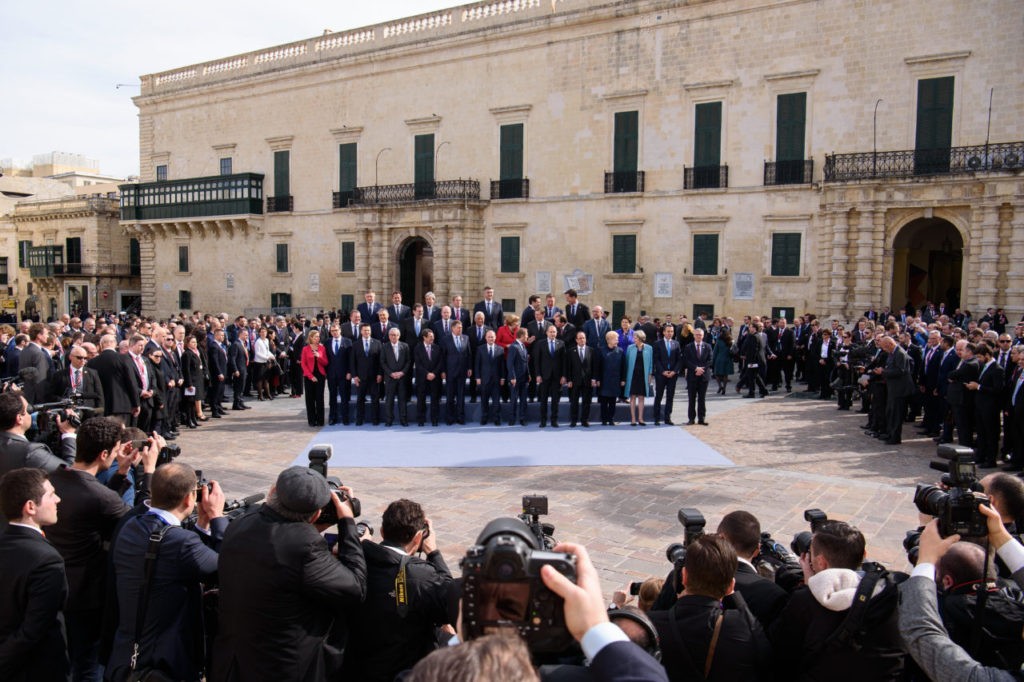 Delegates from the EU Informal Summit gather for the family photo on February 3, 2017 in Valletta, Malta. (Leon Neal-Pool/Getty Images)

The key issue for Europe on Friday was tackling the Libyan migration route, having already largely shut the route Syrian refugees have taken to Greece over the Aegean, thanks to a controversial deal with Turkey.

As the EU leaders boarded a luxury yacht to cross Malta’s historic harbour to their lunch venue, rescue ships off Libya saved hundreds more people including babies from rickety boats.

“It’s an absolute nightmare in the Med right now,” said the charity Doctors Without Borders (MSF).

The leaders signed off on a new strategy to “break the business model” of traffickers who helped 181,000 mainly African economic migrants enter the EU via Libya and Italy last year.

The plan involves funding and training the Libyan coastguard to make it better able to intercept migrant boats before they reach international waters, and helping neighbouring countries to close routes into Libya.

On the eve of the Malta meeting, Italian Prime Minister Paolo Gentiloni and his Libyan counterpart signed a deal in Rome on tackling people smugglers.

That deal provides for the establishment of EU-funded but Libyan-run camps to house migrants pending their “voluntary return or repatriation” to their home countries. Italy committed to funding medical services for the camps.

Rights groups warned that sending boats back to Libya could result in children being sent back to squalid detention centres.

May, Merkel and Hollande were all briefing their colleagues on their contacts with Trump, as Europe seeks to understand an unpredictable new president.

May was set to say she has won a guarantee of support for NATO from Trump and urge other EU leaders to meet commitments to spend two percent of GDP on defence, according to Downing Street.

EU President Donald Tusk, who is chairing the summit, warned in a letter to leaders ahead of the summit that Trump was a “threat” to the EU along with Russian aggression, an increasingly assertive China, and Islamic extremism.

As the leaders met in Malta, a machete-wielding attacker yelling “Allahu Akbar” (“God is Greatest”) was shot by a soldier at the Louvre Museum in Paris.

But EU leaders also see the Trump administration as a chance for Europe to finally unify after Brexit and the eurozone crisis, and perhaps even take Washington’s place in global politics and trade.

After lunch, May will leave and the other 27 leaders will discuss a major declaration on the EU’s future that they plan to unveil at a summit in Rome in March marking the 60th anniversary of the bloc’s founding treaty.