DOVER (UNITED KINGDOM) (AFP) – British street artist Banksy has created his first mural inspired by Brexit, showing a workman chipping away at one of the stars on the European Union flag.

The work appeared on the side of a house on Sunday in Dover, a port town just across the Channel from France that is Britain’s closest point to mainland Europe.

It depicts a man in overalls armed with a chisel and hammer on a ladder, cancelling out one of the 12 stars, causing cracks across the entire blue flag. 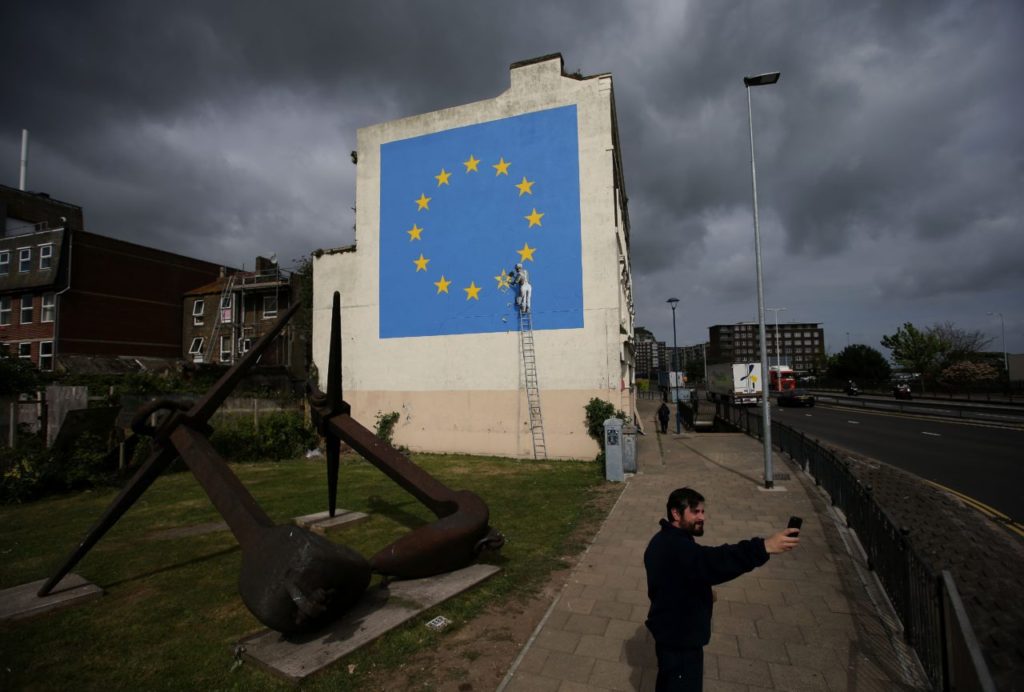 A man takes a “selfie” photograph with a recently painted mural by British graffiti artist Banksy, depicting a workman chipping away at one of the stars on a European Union (EU) themed flag, in Dover, south east England on May 8, 2017. (DANIEL LEAL-OLIVAS/AFP/Getty)

An image of the mural also appeared on Banksy’s official website, confirming its authenticity even though the elusive artist is still anonymous.

Britain voted to leave the EU in a referendum last year and is set to do so in 2019.

Negotiations with Brussels are expected to begin after a snap British general election on June 8.

Passers-by stopped to look at the mural, which has a large anchor in front of it and is on the seaside near a terminal with ferries for northern France.

Banksy is best known for his political satire.

In one recent mural he criticised the use of tear gas by French police against migrants and another at the main migrant camp in the French port of Calais, across the Channel from Dover, shows Apple founder Steve Jobs, whose biological father was a Syrian immigrant.