Emmanuel Macron, the new president of France, travelled to Berlin on his first day of office to continue the long-standing tradition of French leaders meeting the German chancellor their first priority in office, and used the occasion to kick into motion his vision to “deepen” integration of the European Union.

Agreeing a “road map” for the future of the EU, the German chancellor and French president agreed to tackle nationalists across the Union and looked forward to major treaty change which would allow more significant integration between the bloc’s members.

Briefing journalists before he travelled to Germany on his plans to “relaunch” the EU, create a joint national budget, parliament, and finance minister for eurozone nations, Macron clearly caused concern amongst some. German Foreign Minister Wolfgang Schäuble called the reforms and treaty change that would permit such moves as “not realistic”. 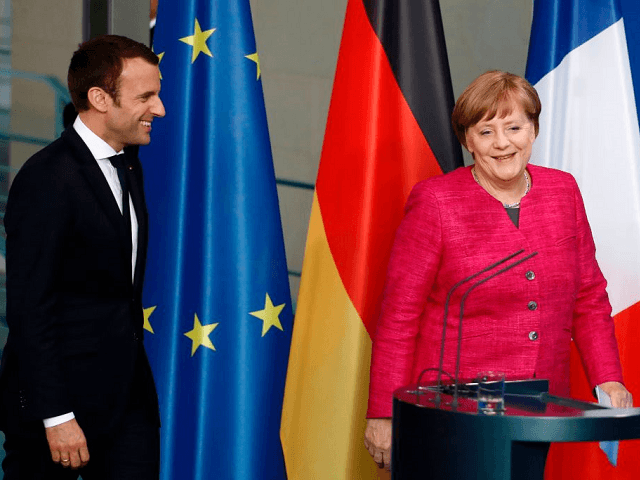 Despite his remarks, Schäuble was overruled by his own chancellor who appeared with Macron just hours later to say they would be pressing ahead to run the eurozone as a single country rather than a group of 19, reports The Times.

Speaking at the press conference after the meeting, Merkel said: “We agreed that we want to develop a roadmap for the European Union’s medium-term perspectives.”

“Germany’s interests are closely linked to France’s interests… Europe is well only if there is a strong France.”

French President Macron said: “In the past the subject of treaty change was a French taboo. It will no longer be the case… What the eurozone needs is an investment policy. We have to introduce new, fresh money as a budget. That requires convergence rules, real structural reforms . . . That is the goal of the joint road map we are working on.”

London’s Evening Standard reports the remarks of a close advisor to Macron, who makes explicit the future dynamic he expects to come from the French and German leaders.

Speaking to the newspaper, presidential advisor and economist Alain Minc said: “The relationship with Merkel will be fantastic! He will be the son she never had; she will be his mother.”