The migrant rescue NGO vessel “Golfo Azzurro” has been refused access to Italian ports on the island of Lampedusa, with some blaming “right-wing hackers” for ship confiscations and NGO members being investigated for people smuggling.

The Golfo Azzurro, which belongs to pro-migrant Spanish NGO Proactiva Open Arms, has been left stranded in international waters after the Italian government refused them access to ports in Lampedusa. The crew were instead directed toward Malta who also refused them port access.

Malta sent a ship to meet the ship and take the crew off the Golfo Azzurro before flying them home, local newspaper Malta Today reports.

According to the NGO, the Italians refused them access to the port because they said they had breached the recent Code of Conduct agreement put out by the government. Proactiva Open Arms activists said they had three migrants on board their ship and the port in Lampedusa was the closest safe port to their location.

The setback is only the latest for migrant rescue NGOs operating in the Mediterranean. Last week the German NGO Jugen Rettet had their ship, the Iuventa, confiscated by Italian authorities. New reports claim that at least 15 members of the organisation are now under investigation for people smuggling. 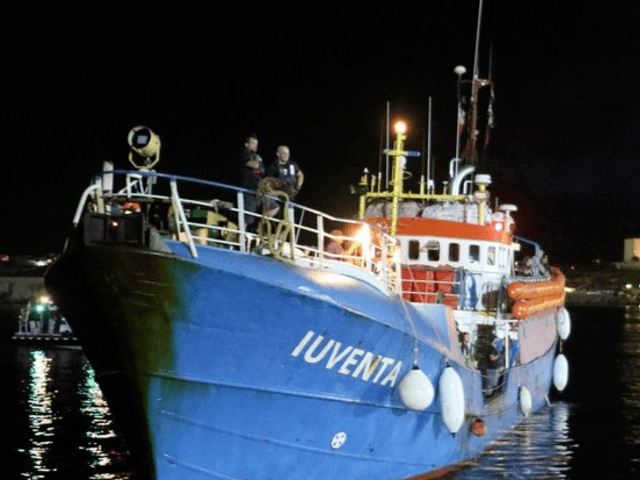 The individuals under investigation come from various European countries including Germany, Portugal, and Spain and are mostly activists rather than ships crew. The Prosecutor’s Office of Trapani has so far not commented on the identities of those under investigation but said that they believe crew members on board the ship in September 2016 and June 2017 had connections to smugglers.

Trapani prosecutor Ambrogio Cartosio sad there were “contacts, meetings, understandings” between the NGO and people smugglers, and rather than rescuing migrants at sea, they were picking them up.

Jugend Rettet has since blamed “right-wing hackers” for the confiscation of the Iuventa. Julian Pahlke, a member of the NGO in Germany, said the Italian prosecutor gave their lawyers 450 pages of evidence linking them to people smugglers and they believe some of the evidence, including their ship’s location, may have been “hacked”.

Proactiva Open Arms also blames the anti-mass migration Defend Europe mission for their ship being rejected after the group claimed the Golfo Azzurro had been picking up migrants within Libyan waters.

Defend Europe claim they had listened to radio communications between the Italian navy and the NGO vessel and that the Italians told the NGO they knew they had violated Libyan territorial waters. Afterwards, Defend Europe made their own communication to the NGO telling them: “The days of the unwatched and unhindered doings in front of the Libyan coast are over.”