Around 77 per cent of British jihadists have links to so-called “non-violent” Islamists and extremists, an analysis of 113 terrorists by the Tony Blair Institute for Global Change (TBIGC) has found.

The study’s authors looked at the jihadists’ operations between the 1980s up until the present day in Syria and Iraq, and concluded by advocating a crackdown on the extremists’ free speech.

Former Labour Prime Minister Mr. Blair introduced the Racial and Religious Hatred Act of 2006, outlawing “religious hatred”, and is a proponent of restricting free speech to tackle terror as well as perceived bigotry.

6 individuals have shaped the British jihadi movement, with 67% of #UKjihadis tied to them. Read our new report: https://t.co/JdMTkDh6Dy pic.twitter.com/GQCPyktNdk

The study found that just six prolific extremists appear to have shaped the British jihadist movement, with 67 per cent of British jihadists tied either directly or indirectly to them.

Convicted Islamic State recruiter Anjem Choudary (pictured, right) is one of them, as is his teacher, Omar Bakri Mohammed (pictured, left); Abu Hamza (pictured, centre), who preached at the Finsbury Park Mosque; Abdullah el-Faisal, who was deported to Jamaica in 2007; Abu Qatada, a radical cleric deported to Jordan; and Hani al-Sibai, a preacher who still lives in London.

The study made a raft of other interesting findings, including that jihadism appears to have a strong family component, with 61 per cent of the of women sampled having relatives involved in jihadi activity and 30 per cent of the men.

London dominates the UK’s jihadist scene, with 49 per cent of those in the study based in the capital.

A further 58 per cent of the men studied had spent time in prison and all but 13 per cent of them had been incarcerated for crimes related to jihadism. However, many are well educated. 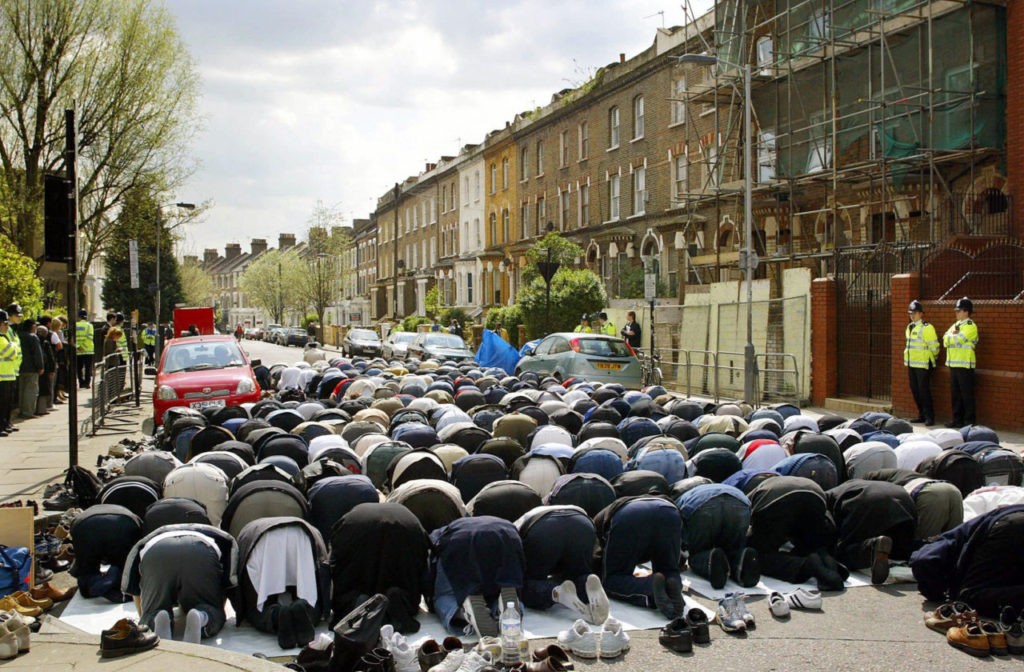 Muslims pray on a residential street outside Finsbury Park mosque in north London 16 April 2004. Police close the road before Friday prayer so Muslim Cleric Abu Hamza al-Masri can address his followers. The mosque was closed down in February 2003 after a police raid. (ADRIAN DENNIS/AFP/Getty)

The report said: “Seven individuals served time in young offender institutions, and at least four were believed to be radicalised in prison.

“Many are well-educated. Thirty-one per cent started a degree, and over half of these studied Stemm [Science, Technology, Engineering, Maths and Medicine] subjects.”

Nearly a third of those with degrees studied humanities or social sciences and four read Islamic studies. Five dropped out of their course before graduating.

The report urges university Islamic societies to be more vigilant and “vet, train, and guide student officers”. Prisoners, too, should be deterred from extremism when locked up, they say.

Radical mosques and charities should also be clamped down on. “Investigate mosques and religious study centres where links are found to multiple jihadis, examining whether radicalisation is taking place under its auspices,” the authors insist.