The BBC has deleted a tweet describing the Iraqi migrant accused of the Parsons Green terror bombing as a “Surrey teenager.”

Ahmed Hassan Mohammed Ali, who claims to be 18-years-old, arrived in Britain from the camps in Calais, Northern France, three years ago, according to the Telegraph.

He travelled illegally across Europe but, as an “unaccompanied child”, was allowed into Britain and processed in a migrant centre in Kent. He was then placed in a foster home with an elderly couple in Sunbury-on-Thames.

During a hearing at Westminster Magistrates’ Court yesterday, the Iraqi migrant spoke only to confirm his name, date of birth, and address.

He has been charged with carrying out the terror bombing at the Parsons Green tube station last September. A homemade bucket bomb containing knives and screws only partially exploded, but injured more than a dozen people.

“Ahmed Hassan Mohammed Ali – the #Surrey teenager accused of building and placing a homemade bomb on a train which partially exploded at #ParsonsGreen Tube station – has pleaded not guilty to attempted murder and causing an explosion.” 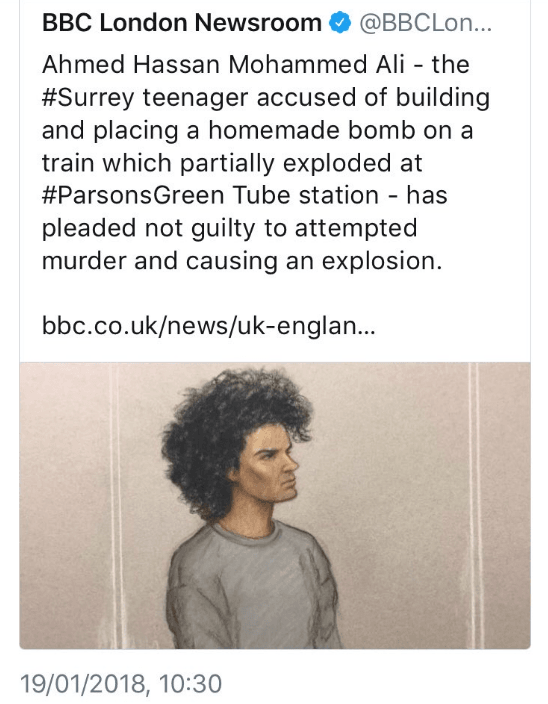 The tweet mysteriously disappeared after later the same day after its description of the Iraqi terror suspect as a “Surrey teenager” attracted widespread derision.

Mr. Hassan was remanded in custody to appear at the Old Bailey on the 13th of October. He was arrested in the port of Dover, a day after the attack, and was thought to be attempting to flee the country.

According to Eurostat figures, only 8 per cent of unaccompanied minors who arrived in Europe in 2015 were under 14, with over half claiming to be aged between 16 and 17. Fully 91 per cent were male.

In Sweden, 86 per cent of 1,215 suspect “child migrants” tested in July last year turned out to be adults, and nearly half of those tested in Hamburg, Germany, last year were also found to be lying about their age.