Asked whether Islam belongs in Germany, some three quarters (74 percent) of Germans polled answered “absolutely not” or “probably not,” in direct opposition to German Chancellor Angela Merkel.

In their responses to a poll by the Civey institute, published Friday by FOCUS, 54.6 percent of Germans said that Islam was “absolutely not” a part of Germany, with an additional 19.7 percent answering “probably not.”

Only 6.4 percent responded that Islam “definitely” belongs in Germany and another 14.9 percent answered, “probably yes.” Of those polled, 4.4 percent abstained. 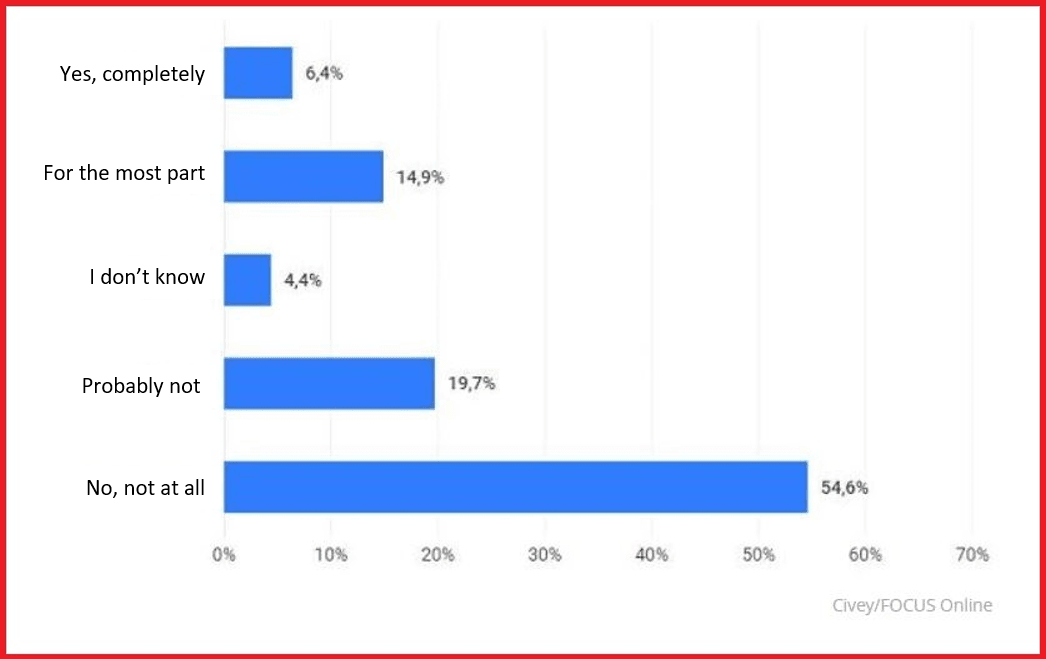 Chancellor Merkel ignited a debate on the subject in August, 2016, when she emphatically declared that “Islam belongs to Germany,” in the midst of Europe’s migrant crisis. She doubled down on that position on Friday, insisting that Islam is an integral part of German culture, in contradiction to Interior Minister Horst Seehofer, the Bavarian leader of the Christian Social Union (CSU), who has stressed the nation’s Christian heritage.

After talks with Swedish prime minister Stefan Lofven on Friday, Merkel noted that four million residents of the country follow Islam, telling reporters: “These Muslims are also part of Germany and with them their religion, Islam, is just as much a part of Germany.”

“Islam does not belong to Germany,” Seehofer told Bild on Friday, pointing to the Christian church’s influence on everyday life and culture. “Germany has been shaped by Christianity,” he said.

Obviously, from a historical perspective, Seehofer’s position is unassailable, since Europe was literally defined geographically by its Christian identity in opposition to Islam.

As Robert D. Kaplan explained in his ground-breaking 2016 Atlantic article “How Islam Created Europe,” Europe—unlike other continents—was ultimately defined by its Christian identity, in opposition to Islam. While other continents were defined by rivers, seas, oceans, and mountains, Europe’s identity was essentially religious, determined by the borders of Christendom.

As the expression “Christian Europe” suggests, Europeans came to see themselves as part of an entity that was, like the Islamic world, defined in religious terms. Quoting the 1957 book, “Europe: The Emergence of an Idea,” Kaplan noted that “European unity began with the concept … of a Christendom in ‘inevitable opposition’ to Islam.”

In this historical sense, Islam does not merely “not belong” to Germany, it literally was set in opposition to Germany, and to Christian Europe more generally.

In the poll conducted by the Civey institute, age and party differences emerge in citizens’ perspective on Islam and its relationship with the German nation.

As FOCUS points out, however, the question “Does Islam belong to Germany?” is imprecise and leaves considerable room for personal interpretation.

In fact, in his interview with Bild Friday, Seehofer emphasized that “the Muslims living with us, of course, belong to Germany.”