A new London police ‘Violent Crime Taskforce’ has had a busy debut, making 1,350 arrests since the team was formed in April.

The task force recovered 40 firearms, 340 knives, and 258 other offensive weapons between April 1 and September 21, the Metropolitan force revealed Tuesday.

Since its formation, the teams have also executed 105 search warrants and have carried out 2,659 weapon sweeps, it has been revealed.

Knife arches are also now regularly deployed in public areas and transport hubs, and officers from the task force have helped carrying out traffic operations aimed at disrupting violent crime in London.

Last month, London’s left-wing Mayor Sadiq Kahn announced that the 150-strong task force would be boosted by shifting 122 officers over from transport as the capital’s crime wave continued. 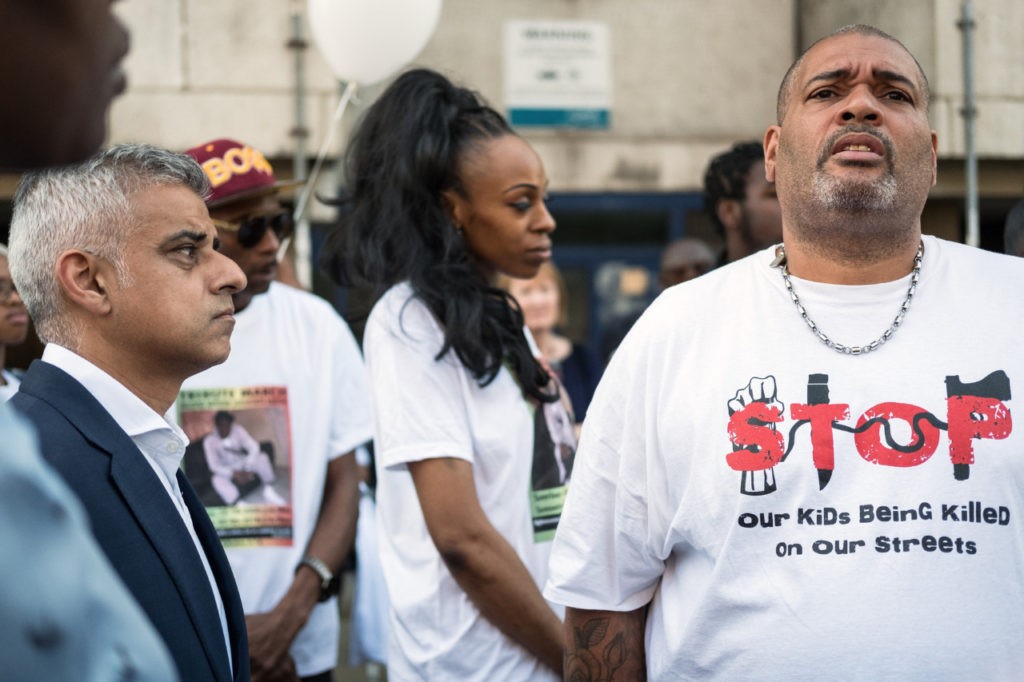 London Mayor Sadiq Khan (L) looks on as a man wears an anti-violence shirt following the murder of teenager Rhyhiem Ainsworth Barton, ahead of a solidarity march on May 8, 2018 in south London, England. (Leon Neal/Getty)

Conservative London Assembly Member Steve O’Connell said the measure was too little too late, calling it “just sticking plaster” and “clearly a knee-jerk reaction from the mayor following a summer of violent crime”.

He blasted last month: “Let’s not forget that under Sadiq Khan, crime in London is going through the roof.

“Knife crime has increased by nearly 50 per cent over the course of his mayoralty and the murder rate has surged by over 40 per cent.”

The Mayor of London, Sadiq Khan, said this week: “The new Violent Crime Taskforce was set up with £15 million from City Hall and, in its first six months, its officers have made over 1,300 arrests and removed more than 600 knives and dangerous weapons off our streets.

“To bolster the vital work of the 150 officers, the Commissioner and I made the difficult decision to move 122 officers from the Roads and Transport Command to strengthen the Taskforce still further as part of our ongoing commitment to drive down knife and violent crime in London.”

“The teams operate across the city, working around the clock targeting hotspot locations where violence and knife crime is a real issue. Our presence in these areas sends a clear message to offenders, that we intend on stopping them in their tracks.

“Our enforcement teams play a vital role in the reduction of violence, but the work that goes into building relationships and providing reassurance to locals is just as important.

“Over the past six months, we’ve made significant inroads into communities where violence is a real issue, and we will continue to do so on a daily basis.”

Mr Khan has repeatedly denied responsibility and deflected blame for the violent crime problem onto the Tories and central government, saying in January that he “can not solve knife crime by [him]self” when pressed on the issue.

A recent poll revealed Mr Khan’s approval rating has crashed to its lowest level on record and is now in negative figures among several demographics.