Three formerly key players in British politics have joined forces to further calls for a second referendum on the United Kingdom’s membership of the European Union, widely seen by Leavers as a ploy to prevent Brexit happening at all, while a former PM accused Brexit voters of having been deceived.

Former New Labour Prime Minister, Globalist apparatchik, and Iraqi war architect Tony Blair — perhaps one of the most reliable allies of the campaign to force Britain to keep voting on staying in the European Union — shared a byline Wednesday in major German newspaper Welt to slam Brexit.

Lending their names to the piece was Nick Clegg, whose tenure as Deputy-Prime Minister under Conservative centrist David Cameron has been credited with the implosion of his own Liberal Democrat party, and notorious Tory ‘wet’ [British political slang for a left-wing Conservative] Michael Heseltine — a key player in the downfall of the Thatcher government in 1990.

The furiously anti-Brexit trio accused pro-leavers of “living in a fantasy land of betrayal”, and repeatedly referred to full Brexit, where Britain actually leaves the European Union as promised in the run-up to the referendum, in charged language as a “blindfold Brexit”. 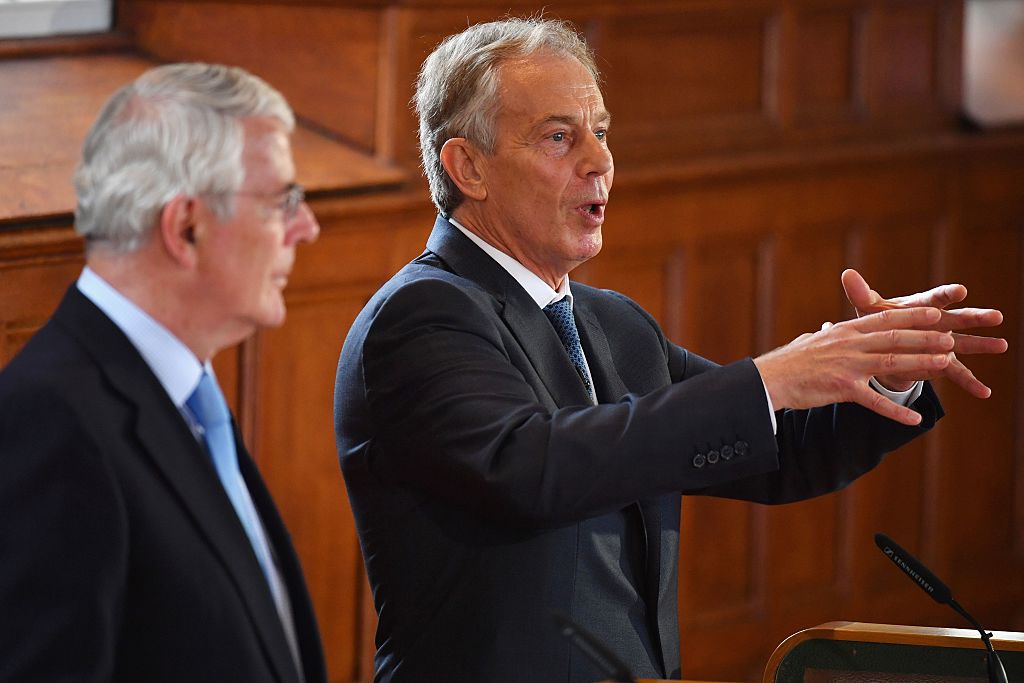 Britain’s Conservative former prime minister John Major (L) stands alongside Labour former prime minister Tony Blair (R) as he speaks at the University of Ulster in Derry (Londonderry), Northern Ireland on June 9, 2016 during a visit to campaign for a ‘remain’ vote in the EU referendum. / JEFF J MITCHELL/AFP/Getty Images

Dismissing Brexiteers as either cynical or naive, the three called for the United Kingdom to delay leaving the European Union until a forced second vote. Ironically, the former British political leaders even claimed to respect and support democracy while working to seek a re-run of a free democratic vote, writing:

…in the UK, the demand for a “People’s Vote” on the outcome of the negotiations will continue to grow. The politics of all this in flux and now is not the time to shut down options either for Britain or Europe.

Regardless of what path the UK takes in the coming weeks, there can be no denying that a strong European Union will remain in the UK’s interests. Its ability to bring such a diverse group of states together and bind them under law and in support of human rights, free markets and free trade is a magnificent achievement and one that should never be sold short or under-valued.

As leaders from different political traditions in Britain we have disagreed about much in the past, but what we have in common- our support for democracy, the rule of law, free expression and free trade – are also fundamental European values and they are all worth defending.

The lengthy rant in a German newspaper was published just hours after another anti-Brexit tract hit British newspapers, with ex-Deputy Prime Minister Heseltine’s former boss John Major taking to the left-wing Guardian to attack Britain’s withdrawal from the European Union.

Like his globalist-minded colleague’s Welt article, Sir John also pursued insulting the electorate as a viable strategy to stop Brexit, claiming leave voters had been “deceived”.

This is not the first foray into anti-Brexit posturing for Major, who brought the United Kingdom into the Maastricht Treaty which officially founded the European Union. In May, Major again accused the British people of ignorance of politics and the European Union, calling for Parliament to consider the “wellbeing of the people” — that is, make decisions for their own good.

Again, Major’s intervention came within days of another Brexit attack by Tony Blair.