Party leaders and senior politicians jumped at the chance to meet schoolgirl environmental campaigner Greta Thunberg this week, the spiritual leader of the movement which has worked to shut down London’s public transport and main airport with protests that led to over 1,000 arrests.

A Government minister, top opposition politician, and other senior figures were apparently thrilled to be chastised for not working hard enough to combat climate change this week by the Swedish teenager, suddenly and massively propelled to the world stage as the acceptable face of anti-capitalism.

Thurnberg, a 16-year-old Swedish schoolgirl who has started a series of climate change protests around the world, met with and addressed figures including top Conservative Michael Gove, Labour’s Jeremy Corbyn, Ed Balls, Diane Abbott, the Liberal Democrat leader Vince Cable, and leaders in the Green Party and the left-wing Scottish and Welsh separatist parties. 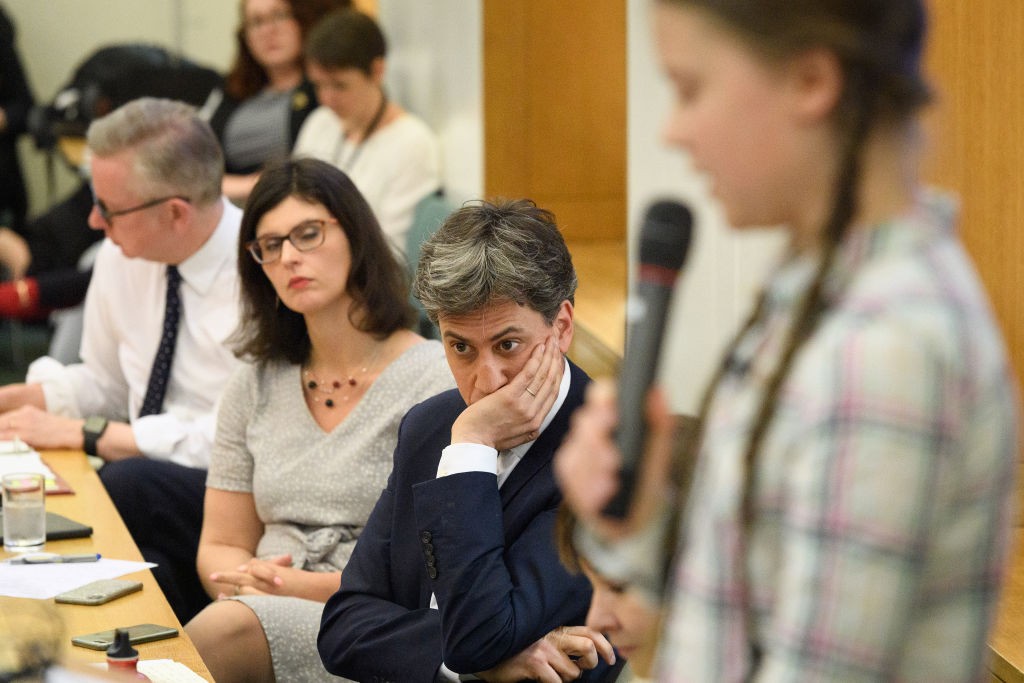 LONDON, ENGLAND – APRIL 23: Former Climate Change Minister Ed Miliband (2R) listens as Swedish environmental campaigner Greta Thunberg addresses politicians, media and guests within the Houses of Parliament on April 23, 2019 in London, England. Her visit coincides with the ongoing “Extinction Rebellion” protests across London, which have seen days of disruption to roads and transport systems, in a bid to highlight the dangers of climate change. (Photo by Leon Neal/Getty Images)

Thunberg demanded MPs take immediate action on the climate: “[Our] future has been sold so a small number of people can make unimaginable amounts of money,” she said

The teen said the United Kingdom’s climate change policies were “beyond absurd”.

Miss Thunberg is known to have extreme views on climate change, and believes, for instance, that flying should only be allowed in emergency situations. She reportedly gave up flying in 2015 and spent two days travelling to Britain by train.

The politicians present lined up to gush over Thunberg, despite her extreme views, with Environment Secretary Michael Gove saying, “the time to act is now, the challenge could not be clearer — Greta, you have been heard.”

Delingpole: Brainwashed Schoolkids Have Nothing Useful to Tell Us about Climate Change https://t.co/4ho8PpQ9IX

Thunberg has seen outpourings of establishment support from all around the world, previously meeting with Pope Francis as well as addressing MEPs in the European Parliament. Norwegian lawmakers have even nominated her for the Nobel Peace Prize.

Her visit comes as Britain is seeing a number of climate demonstrations, the so-called ‘Extinction Rebellion’ protests.

The protests have seen, among other things, parts of London shut down with activists lying in the middle of busy roads, attempting to shut down Heathrow Airport, and staging a “die in” at the Natural History Museum.