A Liverpool bar-owner has renamed his pub The Three Bellends in a sarcastic tribute to the three men he holds responsible for ruining his business: Prime Minister Boris Johnson; Chief Advisor Dominic Cummings; and Health Secretary Matt Hancock.

Daniel Davies, the owner of the pub formerly known as ‘the James Atherton’ in New Brighton, a seaside resort near Liverpool, says that the government’s lockdown and 10pm curfew policies have caused ‘complete carnage’ in his industry.

Liverpool has been especially hard hit because, according to government statistics, it is the most Covid-contagious part of Britain and is, therefore, a Tier Three risk zone subject to the most stringent lockdown rules, including a ban on pubs serving alcohol unless with a ‘proper’ meal.

“Anyone who knows the hospitality sector and who has an IQ in double figures knows this government’s policies are a train-wreck,” Davies told Breitbart News.

“We lost 100 percent of our business during lockdown but we’d just started to recover when the government decided to put the whole of Liverpool under martial law. It’s caused absolute chaos, the curfew especially. Even if you’d had every taxi in the whole country available, it still wouldn’t be enough to clear the city centre at 10pm. And now they’ve stopped the pubs serving alcohol we’ve had to shut up business again.”

It was during a meeting with his staff that he hit on the idea of a pub rebrand.

“I had to call in the staff and tell them their jobs were at risk – again – and of course they wanted to know ‘When can we come back?’ and there were no answers. And I thought of the idiots responsible for this and said ‘Fucking bell ends!’ Then the idea came to me.”

Bellend — or bell end — is a popular British insult, derived from the slang word for the glans of a penis. It means someone who is stupid or contemptible.

“We’re closed. So if anyone does complain it’s a bit like the maitre d’ on the Titanic complaining that the napkins haven’t been folded properly, just after it’s hit the iceberg.”

Davies is now hoping that other pubs across Britain will rename themselves in solidarity – “This industry is quite creative”.

He also confirms that resistance to the government’s policies is growing within his home city. “The gym-owners had a meeting about the new lockdown rules and they’ve said: ‘Fuck it. We’re going to stay open'”. 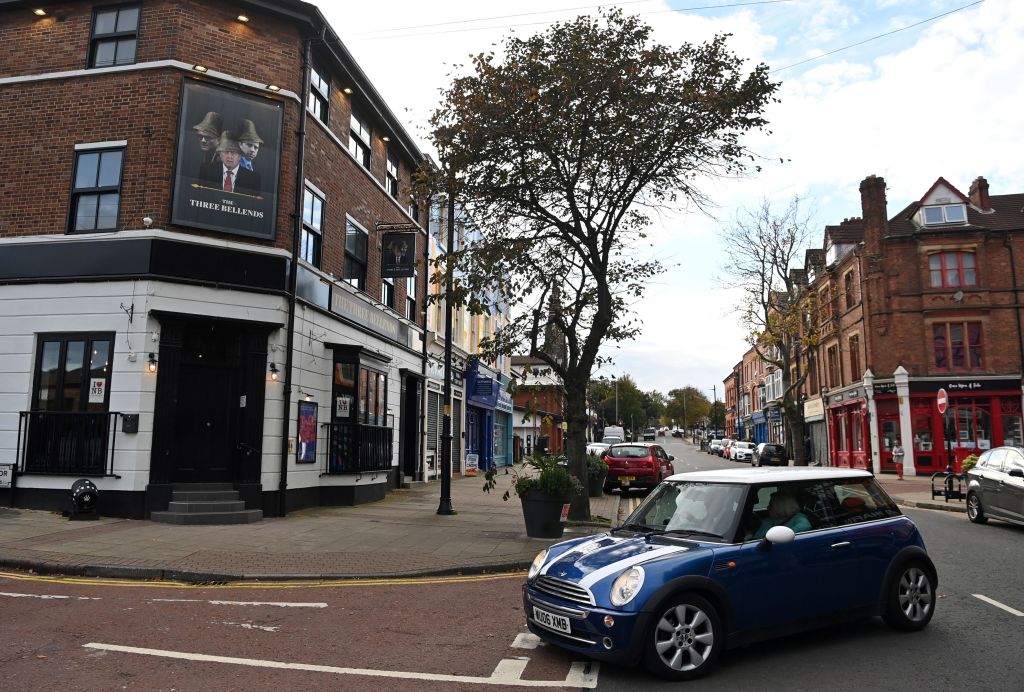 An image of Britain’s Prime Minister Boris Johnson, Britain’s Health Secretary Matt Hancock and Number 10 special advisor Dominic Cummings, is pictured on a sign outside the re-branded The James Atherton Pub in New Brighton, north west England, which has been renamed as ‘The Three Bellends’, in protest against the government’s handling of the coronavirus pandemic, and new local lockdown measures that came in to force in the Liverpool City Region on October 14, 2020. – The northwest city of Liverpool — the only place put into the highest category — will see a ban on household mixing and pub closures from Wednesday for at least four weeks. (Photo by Paul ELLIS / AFP) (Photo by PAUL ELLIS/AFP via Getty Images)