A memorial commemorating a Scottish regiment which rescued a besieged city from Indian rebels will be changed after a single person complained it “pandered to imperialism”.

The India Cross, one of a number of memorials which stands on the Esplanade at the top of the Royal Mile, which runs from the Palace of Holyroodhouse to Edinburgh Castle in the Scottish capital, commemorates the “Heroes of Lucknow”.

These were soldiers of the 78th (Highlanders) Regiment of Foot, or Ross-shire Buffs, who suffered heavy losses fighting their way through rebels who had been besieging the city for months to relieve the beleaguered garrison.

Another siege at Cawnpore, concluded when the British surrendered to the rebels in exchange for safe passage, had ended in the infamous Bibighar massacre — a bloody slaughter of around 120 British women and youngsters. These prisoners were butchered en masse by men armed with meat cleavers, with the survivors, including small children, buried alive along with the corpses in a dry well.

The information board accompanying the monument to the 19th-century battle will now be changed after a single person, 26-year-old junior doctor Vivek Majumder, complained it was “too celebratory of the British and dismissive of the Indian forces,” however. 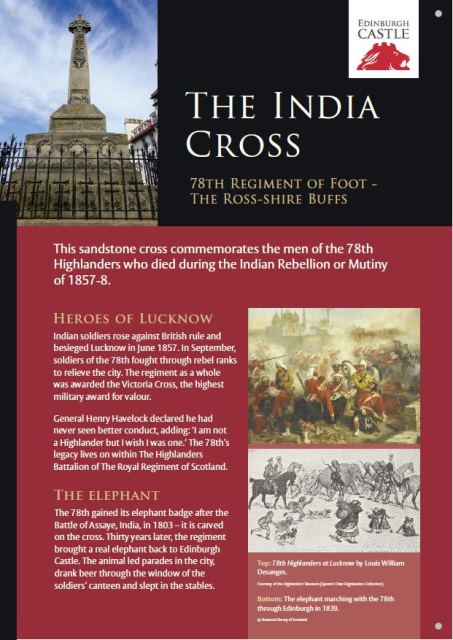 “The description of the battle wasn’t inaccurate, it was more how the belligerents were presented I took issue with — in my eyes it was blatant pandering to imperialism,” complained Majumder, in comments reported by the Telegraph.

“It was not the first time I had seen distasteful imperialistic things in Scottish public spaces, but this was the first that painted the British as ‘heroes’ and that Lucknow was ‘relieved’,” seethed the “infuriated” doctor, who emailed Historic Environment Scotland, which is responsible for the monument, to vent his fury.

Incredibly, the publicly-funded official body caved immediately, promising to put up a new board to appease Mr Majumder.

“We agree the use of the contemporary British description of the regiment as the ‘Heroes of Lucknow’ lacked qualification in the context of the siege and the Indian Rebellion of 1857,” a spokesman grovelled.

“A fuller context of the siege, including from an Indian perspective, is critical for our visitors to better understand this event and why it led to the erection of the India Cross on the Esplanade at Edinburgh Castle.

“As such, one of our historians is currently undertaking research into the siege and the Rebellion of 1857 to ensure the new content on an updated panel, is accurate and balanced.”

Leftist Anger as Statue of British Icon Clive of India Survives Campaign for Its Removal https://t.co/nWE7RPy05F