In an exclusive interview with Breitbart London, Hong Kong activist Nathan Law said that the recent crackdowns by the Chinese Communist Party on the Tiananmen Square Massacre vigil and the imposition of censorship in the Hong Kong film industry represent the “annihilation” of the One Country, Two Systems promise of the Sino-British Joint Declaration on Hong Kong.

The Tiananmen Square Massacre in 1989, which left up to 10,000 dead in Beijing, has been honoured by the citizens of Hong Kong since 1990. For the second year in a row, the Hong Kong Police force — an arm of the Chinese Communist Party — banned demonstrations and vigils under the pretence of the coronavirus, despite the city recording zero cases of the Wuhan Virus in the days prior to the announcement of the ban.

One week after the anniversary of the massacre, the CCP puppet government of Carrie Lamb in Hong Kong announced that the film industry would be subject to censorship under the draconian national security law, which was imposed upon the city last June.

The law introduced curbs on the freedoms promised to the city following the handover of the former British colony to the dictatorship in Beijing in 1997. Under the terms of the Sino-British Joint Declaration, Hong Kong was guaranteed legal independence from Communist rule until 2047 under the so-called “One Country, Two Systems” agreement.

Speaking to Breitbart London at a protest on Saturday, one of the main youth leaders of the pro-freedom movement in Hong Kong, Nathan Law, said: “The way that China has been dealing with Hong Kong is to transplant the dominance of all power, so they are crushing the civil society including the rights of artistic expression and all sorts of rights.”

“This is defiantly a demonstration of Hong Kong’s One Country, Two Systems annihilation and turning into One Country, One System,” Mr Law added. 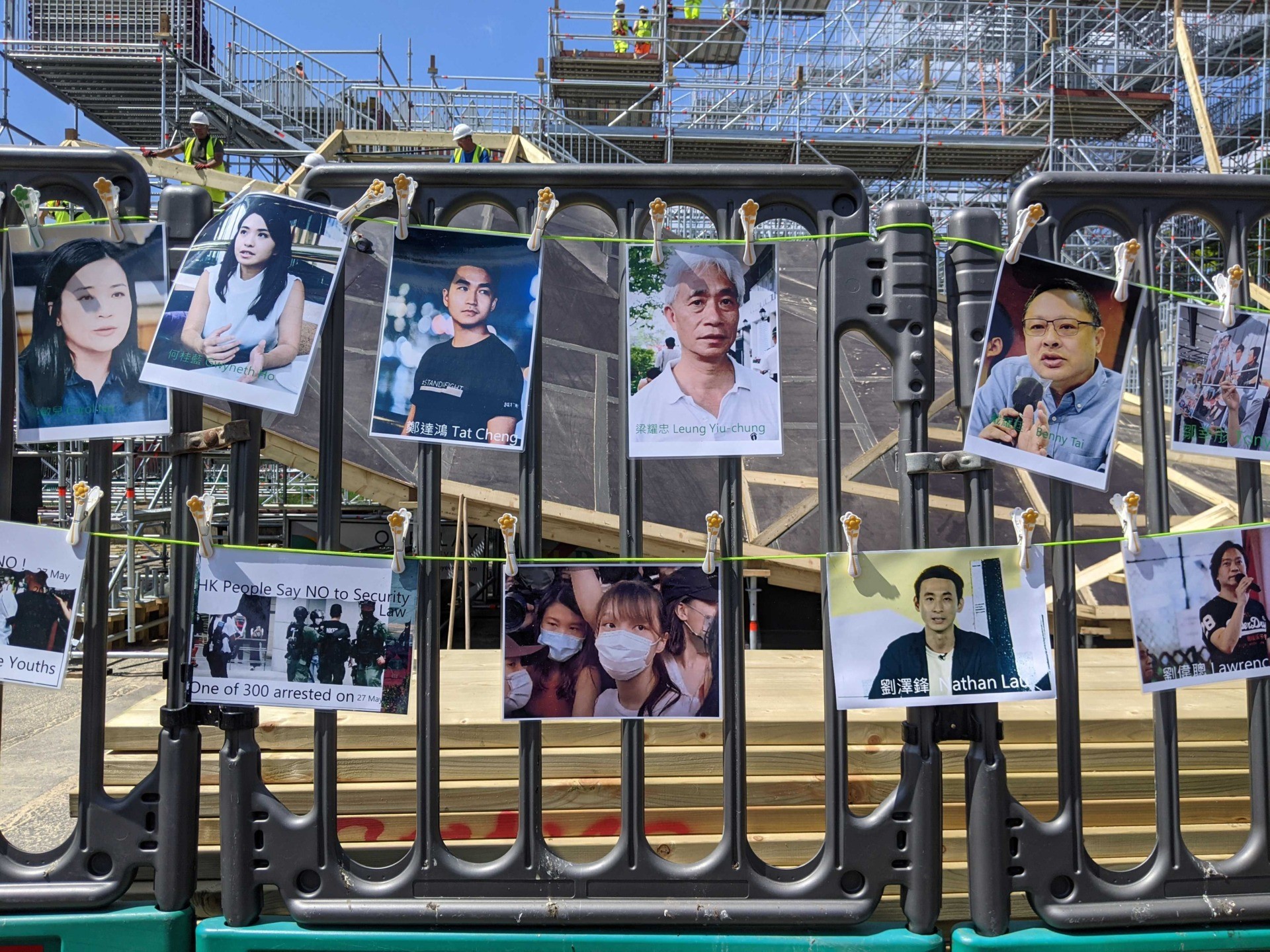 Hong Kong protesters hung pictures of pro-democracy activists who have been targeted by the Chinese Communist Party at a demonstration in London. June 12th, 2021. Kurt Zindulka, Breitbart News

In 2016, he became the youngest person ever elected to the Hong Kong Legislative Council, before being kicked out of the legislative body in 2017 over his pledge of loyalty to the “Hong Kong nation”.

Following the imposition of the national security law last year, he fled the country for fear of being imprisoned like Ms Chow and Mr Wong. He has since been living in exile in Britain after being granted political asylum. 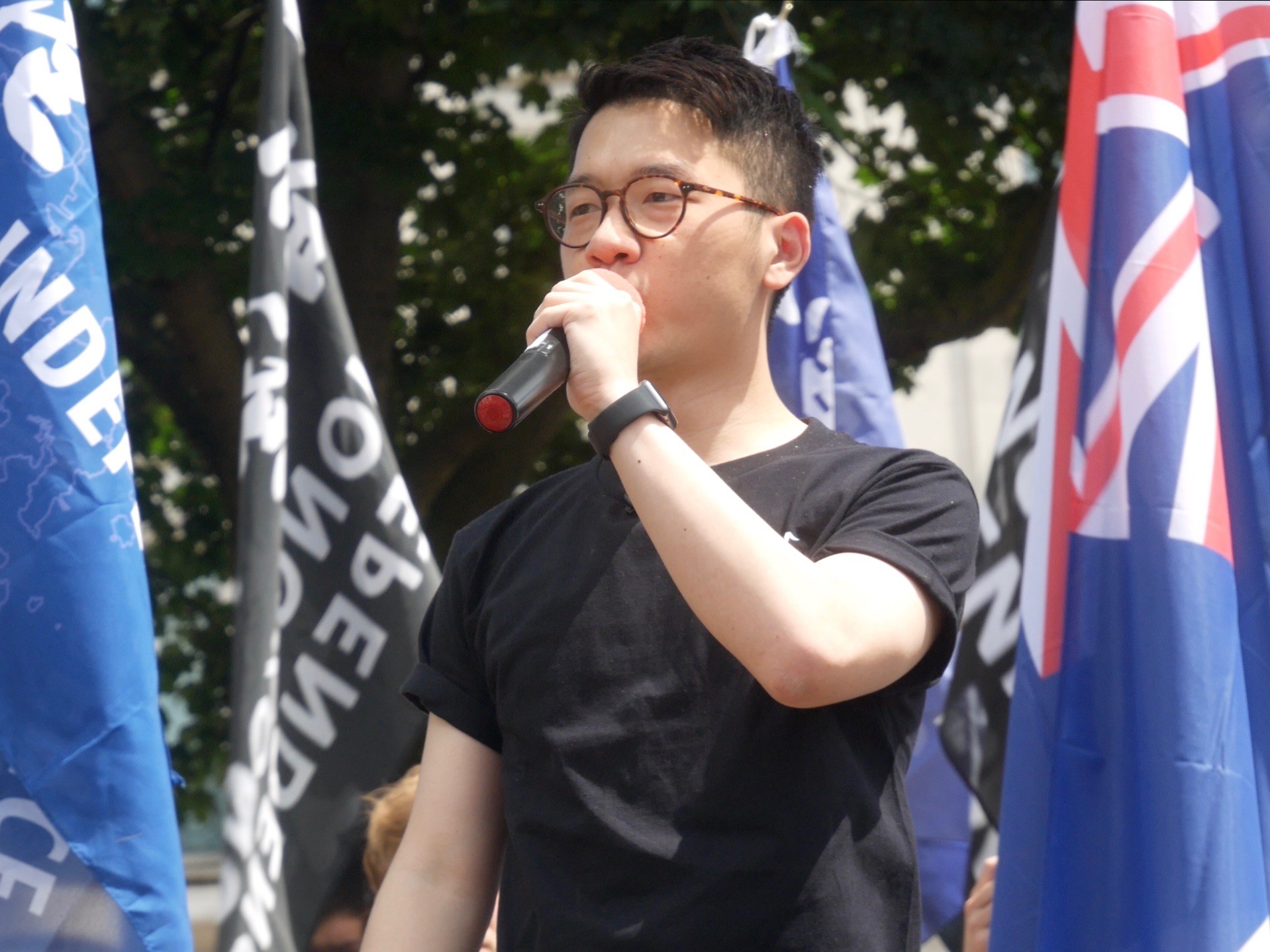 Earlier this month, it emerged that the Israeli website hosting company, Wix.com, had taken down Mr Law’s website after receiving a complaint from the Hong Kong police that the site had violated the city’s national security law, which the CCP backed government claims applies globally. Wix later apologised and restored his website.

Asked whether he felt safe from the long arm of Beijing in the UK, Mr Law told Breitbart London: “I am unable to say that I am completely safe. I have been really vigilant about my surroundings and personal safety, so I hope that I can take care of myself and avoid the suppression physically.”

Law said that he hopes the UK will not follow suit like Wix and succumb to any pressure from the Hong Kong police or Chinese authorities.

On the same day of the protest in London, Law’s compatriot, Agnes Chow, 24, was released from prison after serving over six months behind bars for taking part in “unauthorized assemblies” during the 2019 pro-democracy protests. The third leader of the Umbrella Movement, Joshua Wong, remains in prison to this day.

"I would like the G7 to review the whole idea that we can protest a little bit about China's eradication of freedom and democracy but still rush to them to invest with them and to take their money… move away from the idea of a greedy rush to China" https://t.co/xYOTe8HHhU