2019 was the year that the People’s Republic of China (PRC) shed any pretence of honouring the Sino-British Joint Declaration on Hong Kong, just 22 years after control of the city was handed over from the United Kingdom to the Chinese Communist Party (CCP).

On December 19th, 1984, Premier Zhao Ziyang of the People’s Republic of China and Prime Minister Margaret Thatcher of the United Kingdom signed the Sino-British Joint Declaration. Under the banner of “One Country, Two Systems”, the treaty guaranteed that Hong Kong would remain free from the socialist system of the CCP for 50 years after the Hong Kong handover in 1997.

Five years after the signing of the Joint Declaration, Zhao Ziyang, a free-market reformer and advocate for democracy, was stripped of all of his rank and stature within the Chinese Communist Party. His support for the pro-democracy protestors in Tiananmen Square resulted in him being placed under house arrest, where he remained until his death in 2005.

The Tiananmen Square Massacre in 1989, that left up to 10,000 dead in Beijing, and the imprisonment of Zhao were the first signals that the Chinese Communist Party had no intention of reforming China into a democratic society or had any intention of allowing Hong Kong to prosper as a beacon of freedom on its doorstep.

However, it was not until 2019 that the world truly woke up to the reality of the situation in Hong Kong, after millions took to the streets to protest against the authoritarianism of communist China and its violations of human rights enshrined in the Sino-British Joint Declaration.

Watch: ‘Down Down CCP!’: Protestors Burn Chinese Flag Outside United Nations to Commemorate the 70th Anniversary of the Chinese Communist Party 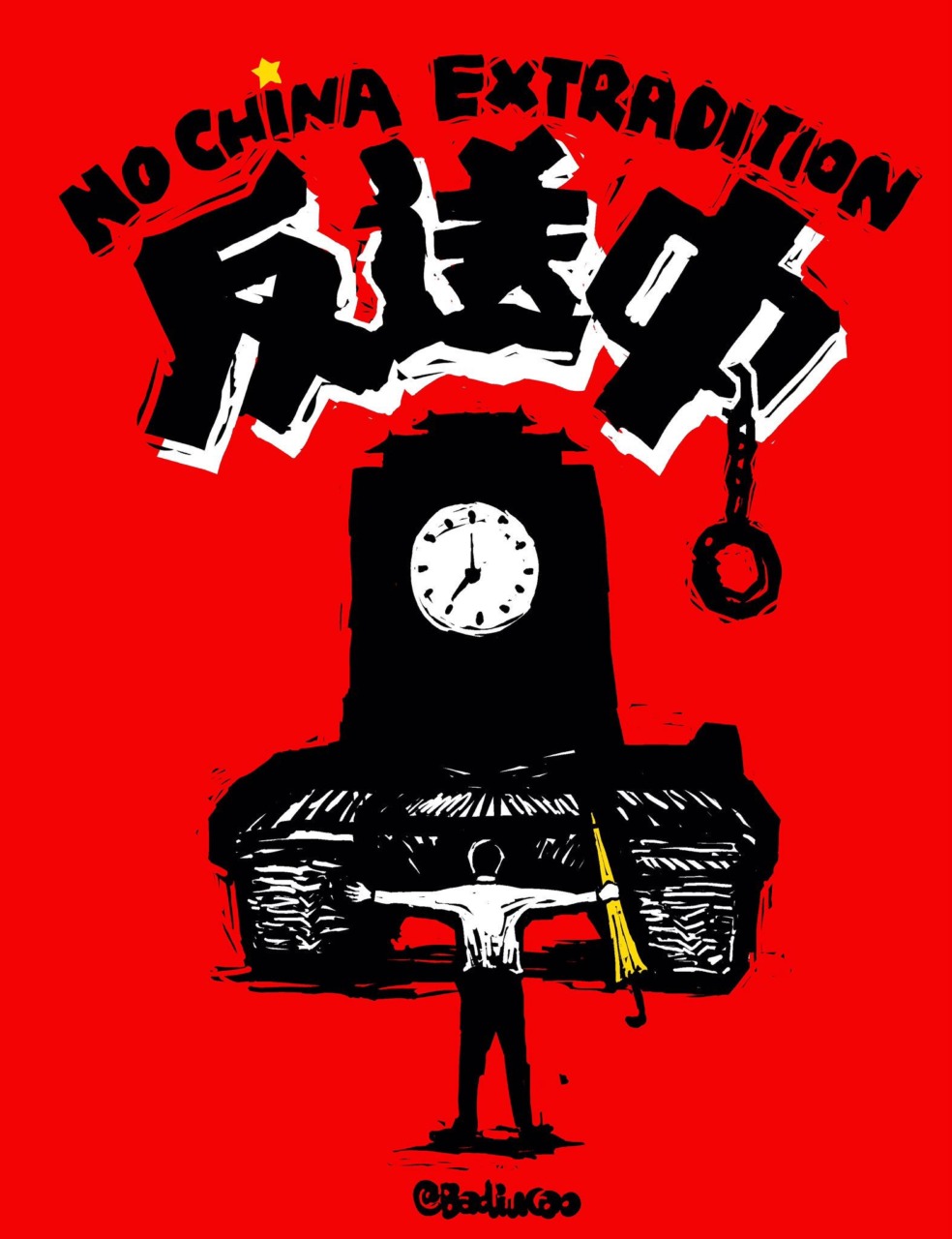 Hong Kong protest art by Badiucao an Australian Chinese Artist, depicting the similarity between the HK protestor’s fight against the extradition bill and the ‘Tank Man’ in Tiananmen Square.

On March 29th, the Hong Kong Legislative Council introduced an extradition bill that if passed would have allowed the Chinese Communist Party to extradite people to mainland China, where over 99 per cent of all trials end in convictions. Those sent to prison in China routinely face torture, rape, organ harvesting and execution.

The bill was introduced after a Hong Kong national, Tong-Kai Chan, confessed to murdering his pregnant girlfriend in Taiwan, before fleeing to Hong Kong.

Critics said that the extradition bill would be used by the communist party to silence political enemies in Hong Kong, sending them to be imprisoned in the mainland on trumped-up charges.

“The proposed changes to the extradition laws will put anyone in Hong Kong doing work related to the mainland at risk. No one will be safe, including activists, human rights lawyers, journalists, and social workers,” said Human Rights Watch’s Sophie Richardson.

A Hong Kong bookseller, Lam Wing Kee, who was abducted and detained for months by China in 2015 for selling books critical of Chinese Communist Party leaders, said that he fled to Taiwan in April so that he would not be extradited.

“I don’t trust the government to guarantee my safety or the safety of any Hong Kong resident,” he said.

There was no extradition treaty between Hong Kong and China under the Sino-British Joint Declaration as Hong Kong was promised judicial independence until 2047 under the terms of the “One Country, Two Systems” agreement.

If passed, the bill would have effectively ended judicial autonomy in Hong Kong, scrapping the system which had been based on British common-law for decades.

In response to the bill, millions of Hong Kongers took to the streets in protest. The pro-democracy protest movement succeeded in forcing the government under Carrie Lam to withdraw the extradition bill in September. However, by that time the protests had transformed into a wider movement calling for more democratic rights under the rallying cry of “Five Demands, Not One Less“. 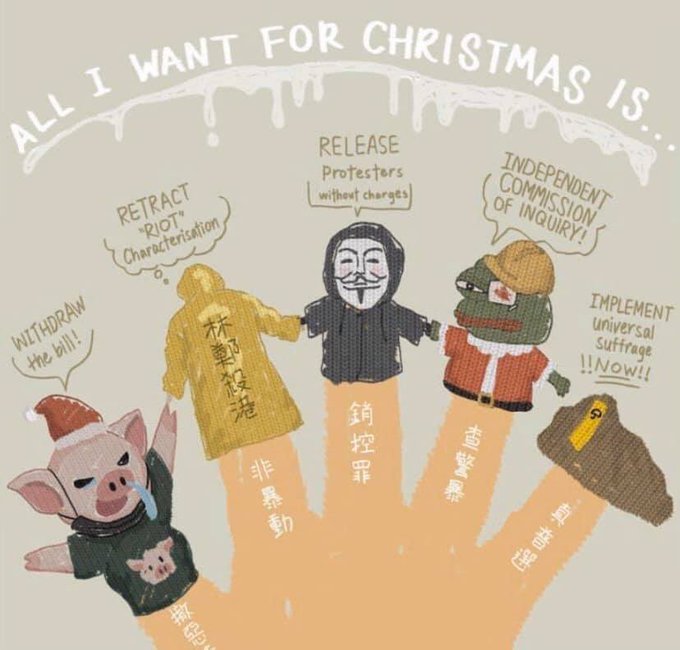 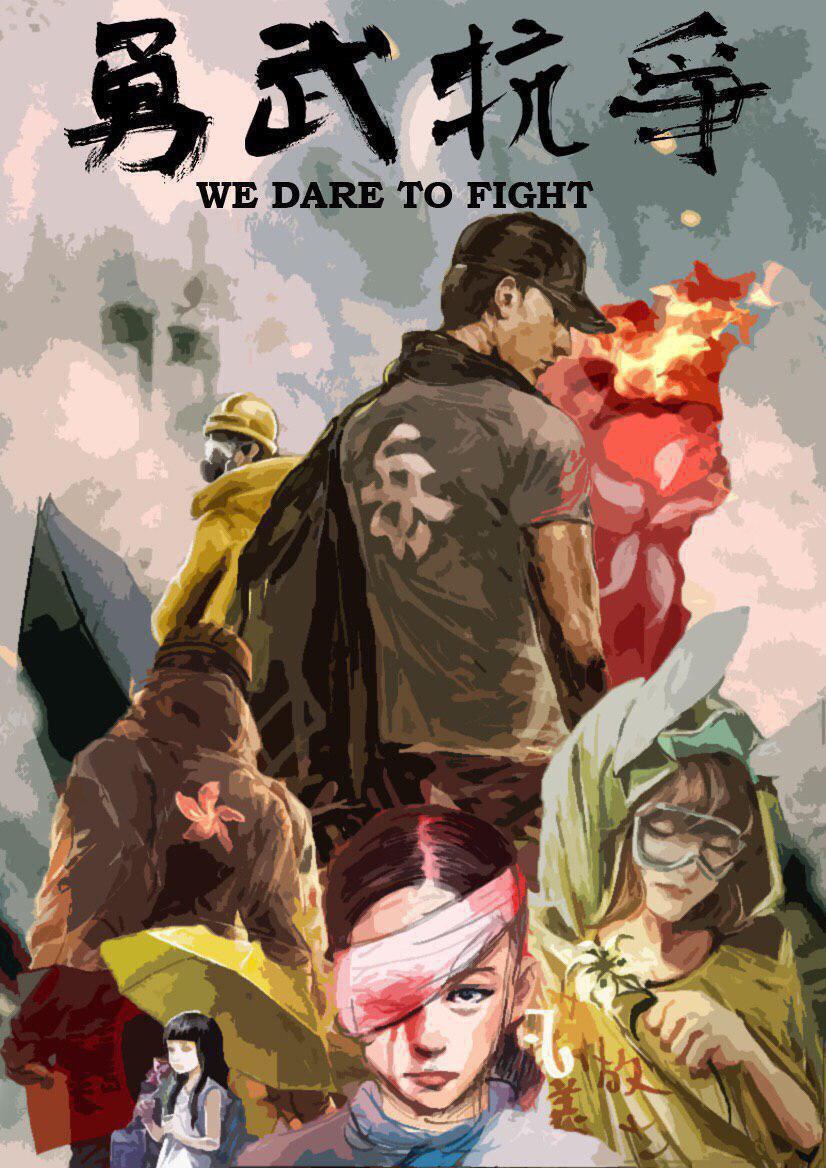 Police brutality against the protestors in Hong Kong has been one of the main motivating forces sustaining the protest movement. Police have used so much tear gas that nearly 88 per cent of Hong Kong’s 7.4 million residents have been exposed to the substance. Police have also used rubber bullets and live rounds on protestors, tragically demonstrated when police shot a 14-year-old boy in October. There have also been reports of sexual assault by the police.

One woman who lost an eye during after being shot said that the police were intentionally planning to “murder, mutilate and assault their very own citizens”.

“As a first-hand victim of police brutality, I am forced to condemn the Hong Kong Police Force, I urge them to put a stop to all acts of violence against Hong Kong citizens, and to honour their professional responsibility to enforce the law,” she said.

“They are being gang-raped, sodomy has been committed against them. When people are being arrested, the police will whisper in their ear: ‘That will be really fun if we have sodomy with you.’ They’re actually saying that to young men. Can you imagine what type of police that is? I’m not exaggerating when I say that they are treating Hong Kong people worse than the Nazis,” an elderly Hong Kong woman told Breitbart London in November.

Hong Kongers Sing 'God Save the Queen', Ask Brits to Protect Them from Communist Regime https://t.co/Bv0OeaYYDA

The three men were reprimanded by then Shadow Minister for Foreign and Commonwealth Affairs, Helen Goodman, who said that the UK government should throw the “book” at them for their alleged role in ordering the use of tear gas and rubber bullets against peaceful protestors.

Chief Superintendent Rupert Dover was confronted on the streets in July by Joshua Wong, the 22-year-old activist and secretary-general of the Hong Kong pro-democracy party “Demosistō”, shortly after Wong was released from prison for his role in the Umbrella Movement demonstrations of 2014.

“Rupert Dover, you are British, and you serve the interests of Beijing,” Mr Wong screamed at Mr Dover, who was shielded by other officers.

For more than 10 minutes, he never answered any questions from me and journalists. We are just asking for an explanation on his decision to cast rubber bullets and tear gas, and apologized to Hong Kong people. #RubertDover you need to pay the price! (Credit to HKU campus TV) pic.twitter.com/2M6bIJOHxq

Speaking to Breitbart London in November, a former member of the Hong Kong police condemned the violence committed by officers: “This is contrary to my training and my western values. I would never use my baton or tear gas in such a way, and when people are vulnerable, when they have been arrested, we should not torture them. Their comfort and safety actually is our duty.”

–The Abduction and Torture of British Consulate Employee Simon Cheng– 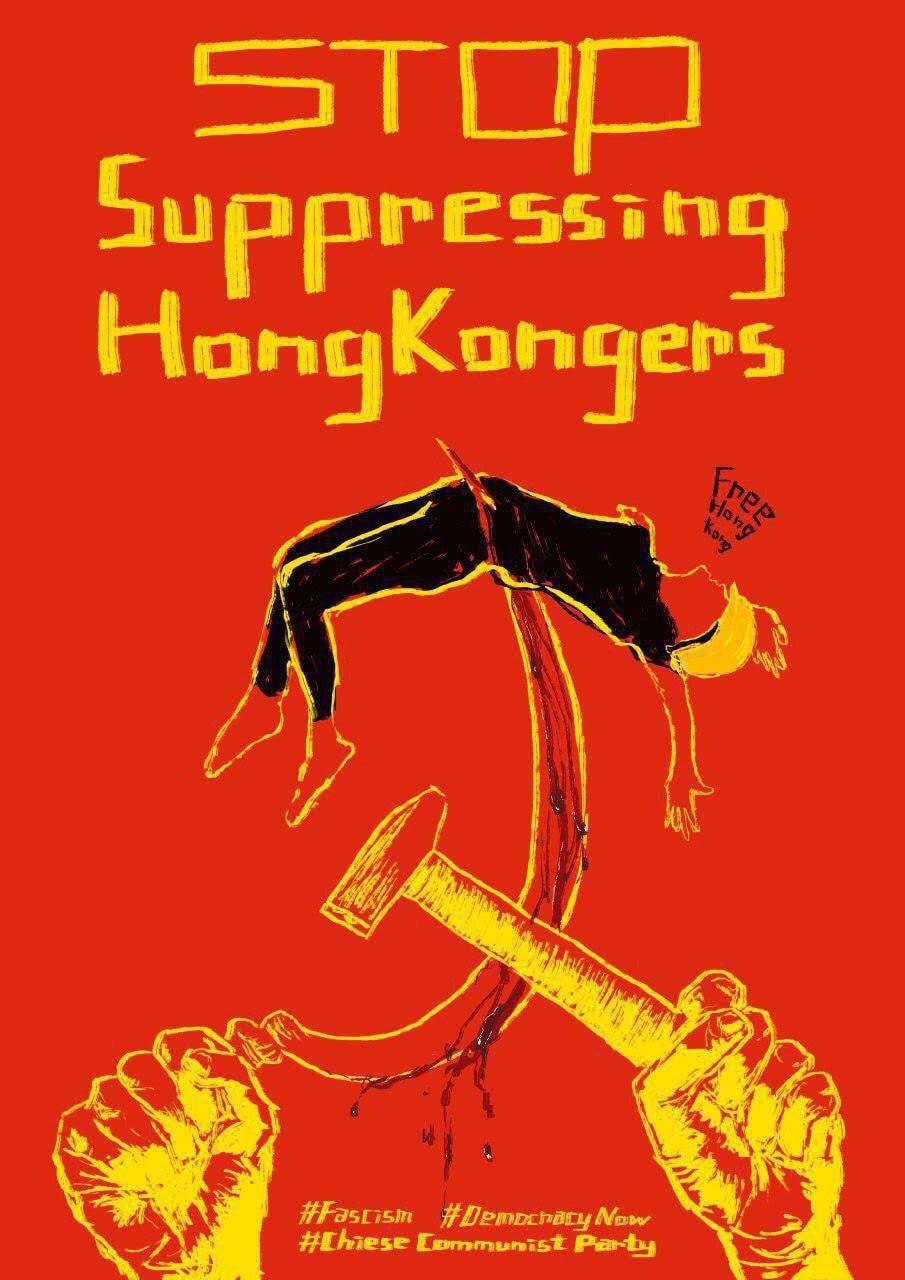 In November, Breitbart London reported that a former British Consulate employee in Hong Kong, Simon Cheng, claimed that he was tortured after being abducted in the West Kowloon Highspeed Railway Station in Hong Kong and brought to mainland China.

Mr Cheng said that he was detained by the communist regime on suspicion of being a spy for the British government and working to foment the protests in Hong Kong.  He claimed that his captors asked him three types of questions: “The UK role in the Hong Kong ‘riots’, my role in the ‘riots’, and my relations with mainlanders who joined the ‘riots’.”

“Sometimes, they ordered me to do the ‘stress tests’, which includes extreme strength exercise such as ‘squat’ and ‘chair pose’ for countless hours. They beat me every time I failed to do so using something like sharpened batons. They also poked my vulnerable and shivering body parts, such as knee joint. I was blindfolded and hooded during the whole torture and interrogations, I sweated a lot, and felt exhausted, dizzy and suffocated,” Cheng said of his time in the communist prison.

Mr Cheng’s frightening account of his treatment in China was followed by a stark condemnation of the Chinese Communist Party by British Foreign Secretary Dominic Raab, who said: “We are outraged by the disgraceful mistreatment that Mr Cheng faced when he was in detention in mainland China… and we’ve made clear that we expect the Chinese authorities to review and hold to account those responsible.”

The abduction of Simon Cheng confirmed what many critics feared would happen should the extradition bill be adopted, demonstrating the CCP’s unwillingness to honour the rule of law or the Sino-British Joint Declaration.

–“Hong Kong will never have to walk alone”– 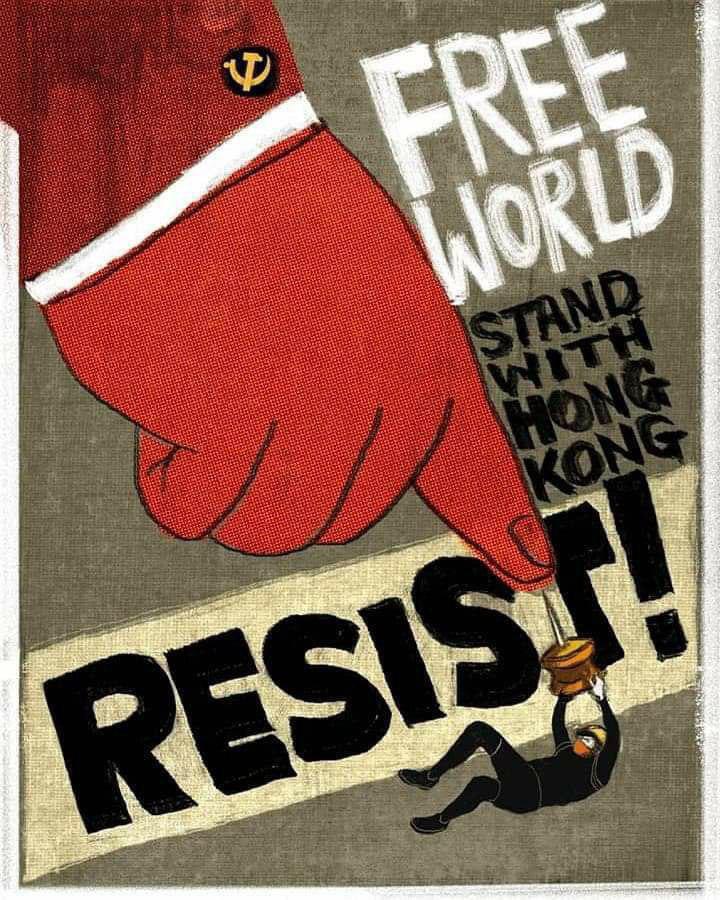 Hong Kong protest art calling on the free nations of the world to stand with Hong Kong against communist oppression.

Ahead of the Hong Kong Handover, in a speech given  in 1996, then Prime Minister John Major said: “If there were any suggestion of a breach of the Joint Declaration, we would have a duty to pursue every legal and other avenue available to us.”

“Hong Kong will never have to walk alone,” Major promised.

It remains to be seen what actions Prime Minister Boris Johnson will take to honour this promise and to enforce the Sino-British Joint Declaration.

The founder of Hong Kong Watch, Benedict Rogers, told Breitbart London that because of its history, the UK has a responsibility to take a leading role in the fight for freedom in Hong Kong.

“We won’t know unless we try and if we just say it’s impossible then we know Hong Kong is finished. We have to work for it,” he concluded.

Watch: Hong Kong Watch Founder: The United Kingdom Has a Responsibility to Lead