GDYNIA, Poland (AP) – Polish President Andrzej Duda and the country’s defense minister on Tuesday took delivery of a first shipment of tanks and howitzers from South Korea, hailing the swift implementation of a deal signed in the summer in the face of the war in neighboring Ukraine.

Duda and Mariusz Blaszczak were in the Polish Navy port of Gdynia, on the Baltic coast, to mark the arrival by sea of the first 10 Black Panther K2 tanks, along with 24 Thunder K9 howitzers, from a $5.8 billion deal with Seoul.

They stressed that South Korea responded quickly to the need by Poland, a European Union nation, to urgently increase its deterrence and defense potential as Russia is fighting a war in Ukraine, just across Poland’s eastern border. 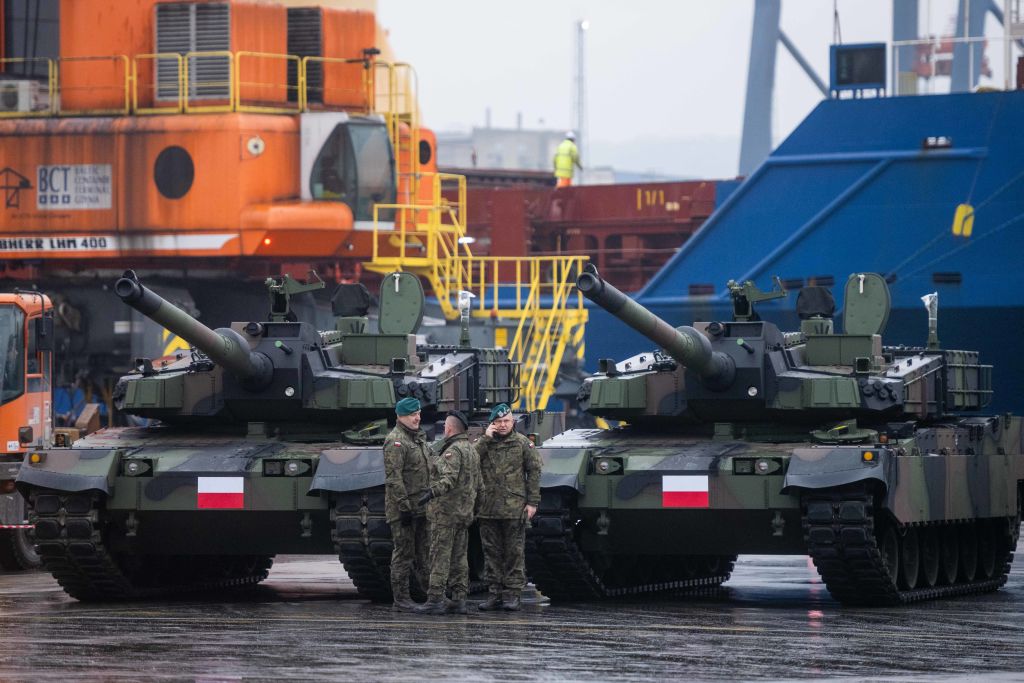 Polish Army soldiers stand in front of tanks in the port after the arrival of the first K2 tanks and K9 howitzers for Poland on December 6, 2022 at the Baltic Container Terminal in Gdynia. – The Polish Army is strengthening its potential with the use of South Korean defense technologies. In July 2022 an agreement was concluded with Hyundai Rotem for the acquisition of a total of 1,000 K2 tanks with accompanying vehicles. Poland has massively stepped up weapons purchases since Russia invaded Ukraine, as well as sending military aid to Kyiv and taking in millions of Ukrainian refugees. (Photo by MATEUSZ SLODKOWSKI / AFP) (Photo by MATEUSZ SLODKOWSKI/AFP via Getty Images)

“This is the future, this is the real strengthening of Poland’s security,” Duda said, standing before the tanks and the howitzers.

“In order to stop aggression, to stop the enemy, it is necessary for the army to have this modern equipment,” he added.

More deliveries are planned through 2025.

Poland is purchasing hundreds of K2 Black Panther tanks made by Hyundai Rotem and of K9 Thunder howitzers made by Hanhwa Defense. The deal includes training, logistics and ammunition.

The conservative government in Warsaw is also buying Korean FA-50 fighter jets, a light training and combat aircraft made jointly by Korea Aerospace and Lockheed Martin, for some $3 billion.

Poland is also seeking a technology transfer so it can launch production domestically.