Guterres made his stark warning to humankind as he despaired of declining biodiversity at the beginning of the two-week Cop15 environmental summit in Montreal, Canada. The event has drawn upwards of 10,000 delegates from all around the world to fly in for talks, meetings, presentations, and calls for action before they fly home again.

“The deluded dreams of billionaires aside, there is no Planet B,” the veteran Portuguese Socialist told the attendees at an event designed to engage governments in formal negotiations for U.N. biodiversity targets, the Guardian reports.

At the ceremony, the Canadian Prime Minister Justin Trudeau urged countries to agree a target to conserve 30 percent of Earth for nature in the final agreement. 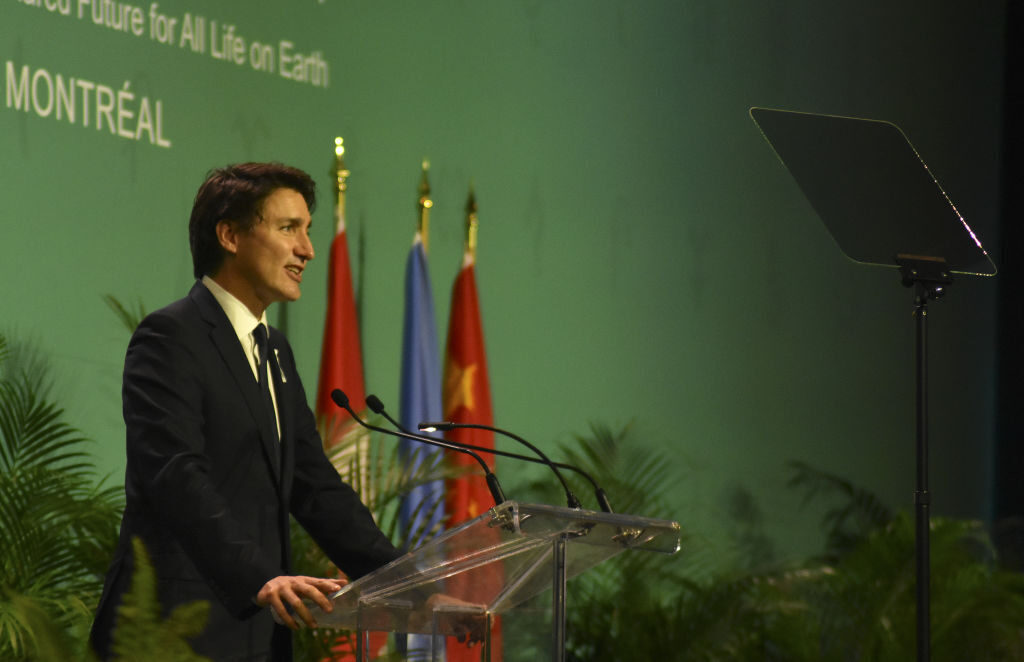 “We have not chosen that 30% number at random. It is the critical threshold according to the greatest scientists to avoid the risk of extinction and also to ensure our food and economic security. Thirty percent, that is quite feasible,” Trudeau said in a speech that was interrupted by protesters holding up a sign about the murder of Indigenous peoples.

Nearly 200 countries have gathered for the December 7-19 UN Biodiversity Conference, the 15th meeting of the Conference of the Parties (COP15) to the Convention on Biological Diversity (CBD).

Less people to save the planet? https://t.co/ddS3qAfn2e

An estimated 10,000 delegates are in place to debate the adoption of the post-2020 global biodiversity framework, described as “a global roadmap for the conservation, protection, restoration and sustainable management of biodiversity and ecosystems for the next decade.”

“We are treating nature like a toilet,” Guterres said. “And ultimately, we are committing suicide by proxy,” with the effects felt on jobs, hunger, disease and death. 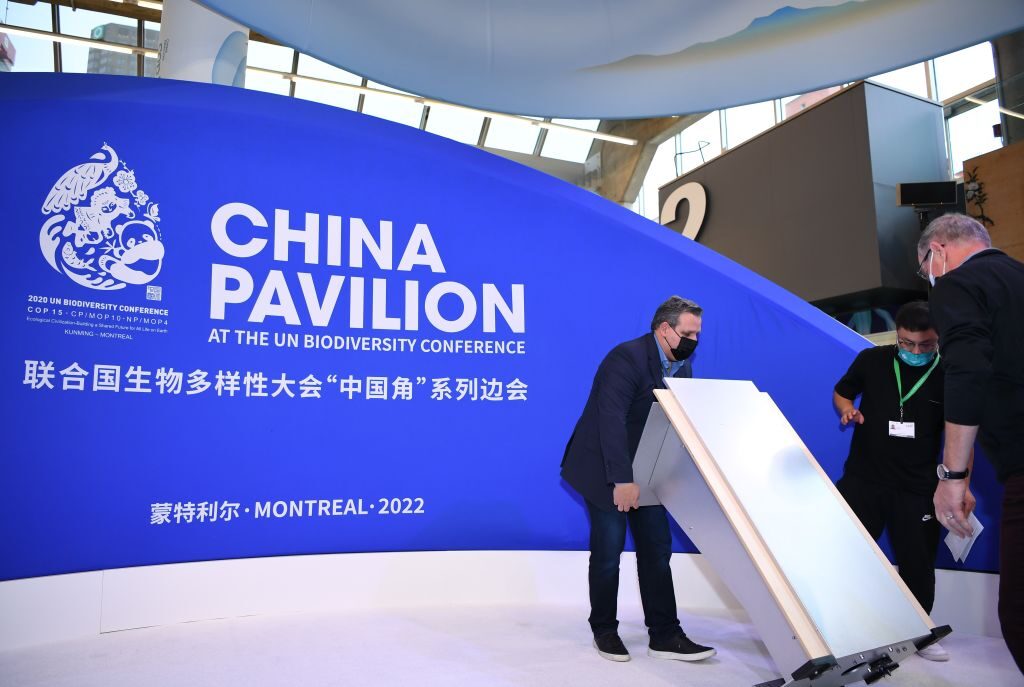 People prepare for the China Pavilion at Montreal Convention Center in Montreal, Canada, on Dec. 6, 2022. The second part of the 15th meeting of the Conference of the Parties COP15 is scheduled for Dec. 7-19 in Montreal. Ren Pengfei/Xinhua via Getty) 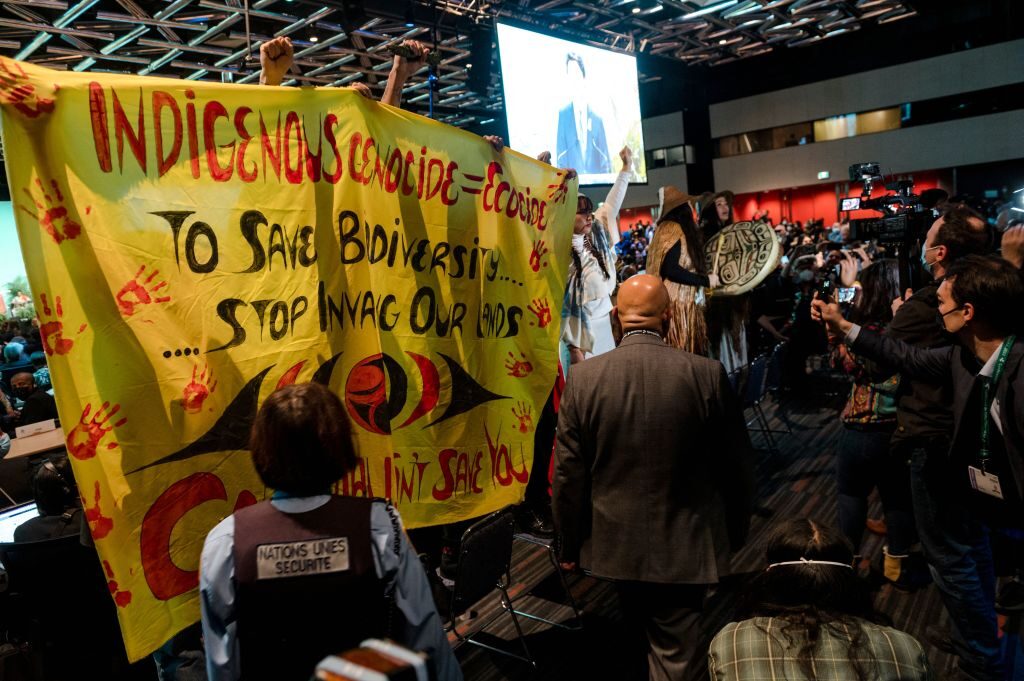 Draft targets for the 10-year framework include a cornerstone pledge to put at least 30 percent of their land and sea areas under conservation by 2030 – a target often referred to as the “30-by-30” goal. Currently, only about 17 percent of the world’s land area falls under some sort of protection, while less than eight percent of the global ocean is protected, the Guardian sets out.

The new goal will rely heavily on the involvement of Indigenous peoples, who steward land that is home to about 80 percent of Earth’s remaining biodiversity. 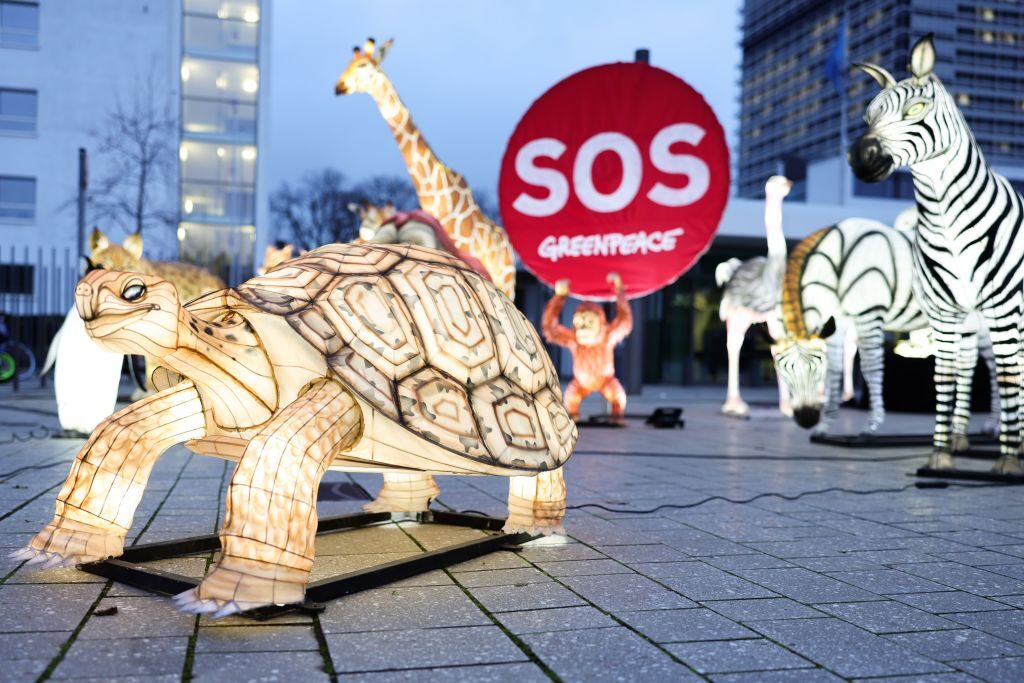 Illuminated effigies of animals set up in front of the United Nations campus by Greenpeace are pictured to protest for better global biodiversity protection on December 05, 2022 in Bonn, Germany. The protest is taking place ahead of the COP15 biodiversity conference in Montreal, Canada. (Andreas Rentz/Getty)

COP15 is currently chaired by China, but it is not hosting the meeting because of the coronavirus pandemic.

China was due to hold the summit in the city of Kunming but postponed the event four times from its original date in 2020 due to COVID before agreeing to hold the talks in Montreal.