Illegal migration makes the U.S. weak, but legal immigration “helps make us strong,” and the pocketbook pain of inflation is “another matter,” GOP leader Sen. Mitch McConnell (R-KY), said in a revealing speech on the Senate floor.

The address spotlights the GOP leaders’ tactical zigzags between corporate donors’ profits and GOP voters’ pocketbooks as it tries to win a Senate majority in November.

“There was a time where discussion on immigration was very simple,” said Jon Feere, a former executive at the Department of Homeland Security who now works with the Center for Immigration Studies.

The focus was entirely on border security. But those times are long gone. Americans now understand the larger impact that immigration has on wages, on social services. A lot of those issues have been front and center in political conversations over the past five years, six years.

[The southern inflow] is record-shattering. Two million apprehensions only count the subset of people that were actually caught. Experts estimate hundreds of thousands more people on top of that number who simply got away …

There’s nothing compassionate or humane about the border crisis that Democrats’ mixed signals and failed policies have unleashed. It’s not fair to American citizens. It’s not fair to law enforcement. And it’s not fair to the people who’ve been encouraged to undertake desperate and dangerous journeys by years of Democrats signaling to the world that there are no real consequences for breaking our laws and cutting in line.

But many business groups and donors support the federal government’s Extraction Migration policies. Those policies provide them with an imported stimulus of cheap workers, government-aided consumers, and high-occupancy renters.

Curiously, McConnell also declined to shame Democrats for the huge and growing death toll of Biden’s migration — even though Democrats tried to stigmatize Republicans in 2018 and 2020 with the poll-tested theme of “child separations.”

"McConnell spent millions upon millions of dollars in nasty ads to defeat Mo Brooks in the primary, because Brooks takes sensible positions on immigration." https://t.co/WpqqRU9glz

But he did add a rare populist spin.

He described the Democratic uproar over Gov. Ron DeSantis’ transfer of about 50 migrants to Democrats’ summer hideaway on Martha’s Vinyard in Massachusetts, saying:

According to one report from early 2021, the Biden administration was already filling Greyhound buses with people turning up at our border and dropping them into various destinations from the South to the Midwest to the Northeast. Ah, but it was never to Martha’s Vinyard.

So these well-to-do blue enclaves are finally witnessing the smallest fraction of the challenges that open borders have forced on working-class communities all across our country.

McConnell’s spin admits the economic conflicts caused by migration with his depiction of a conflict between “well-to-do-blue enclaves” and “working-class communities.”

But he tactfully avoided likely complaints from his donors by not explaining what he meant by the “challenges that open borders have forced on working-class communities.”

Then McConnell literally turned the page on that divisive topic. 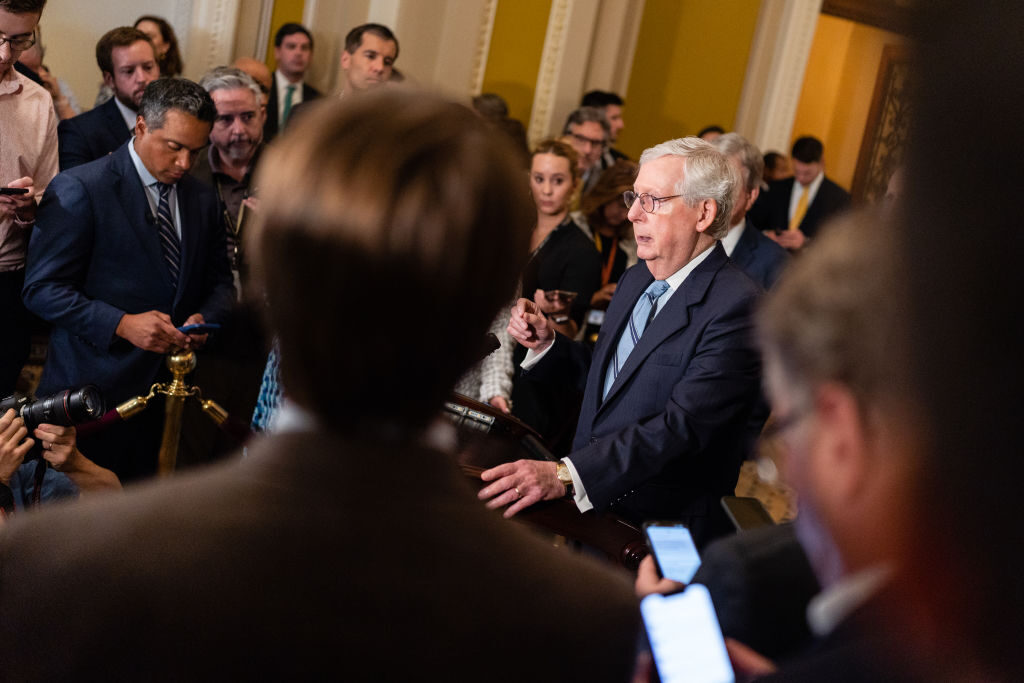 In his next breath, and reading from a new page, he said:

Now, on another matter. Washington Democrats’ runaway inflation has caused a nationwide crisis. It has put working families and small businesses in a bind from coast to coast. Since President Biden took office inflation has shot up a staggering 13.2 percent.  For the average American household, this translates to hundreds and hundreds of extra dollars every month working overtime just barely — barely — tread water.

McConnell had been silent about immigration economics, but he was happy to explain the pocketbook costs of inflation that are opposed by both voters and donors.

The director of the Jessamine County Food Pantry in Nicholasville says, “Our numbers here are going up like crazy… We have problems actually getting food now. We’re actually not giving away as much as we were just a couple months ago because I can’t find it, and I can’t afford it sometimes when I can find it.”

And of course, these challenges aren’t limited to our Commonwealth [of Kentucky].

Yet food banks for Americans and buses for migrants are two sides of the same open-borders coin.

Biden’s migration is unfairly pressuring down Americans’ wages. It is also boosting rents and housing prices, and pushing up inflation for a wide variety of goods, such as used autos and food. For example, economists say housing costs comprise one-third of inflation — and those higher housing costs are being spiked by roughly 5 million legal and illegal migrants since 2021.

Federal immigration economics also impoverishes McConnell’s state of Kentucky. The coastal investors in New York and California who might be tempted to hire employees in Kentucky, Nebraska, Ohio, and other heartland states now the federal government’s Extraction Migration strategy delivers a new cohort of grateful, reliable, and cheap workers to downtown bus stations each day.

The migration-caused economic pressure is also threatening to split the GOP’s political coalition of donors and voters, just as Donald Trump split it in 2015 and 2016 to win the GOP nomination.

Democrats say the border is "secure," but that’s just not true.

“Everyone is aware that there is an economic impact from mass immigration,” said Feere, adding:

It’s just that the Republicans who are currently running the party don’t want to side with working-class Americans and would prefer the debate goes back to one that  is largely focused on national security, border security — and [avoid] a serious conversation about what’s in America’s best interests from an [national] economic and [pocketbook] wage perspective.

“Border security is easy to talk about — [and] they want to go back to the Bush-era thinking on immigration,” said Feere.