Venezuelan leader Nicolas Maduro urged the U.S. and the European Union (E.U.) to lift “criminal” oil sanctions imposed on the Latin American nation in a speech presented at the 76th session of the U.N. General Assembly on Tuesday.

“We… demand that all the criminal sanctions imposed on the Venezuelan economy and society by the United States and the European Union be lifted,” Maduro said in a pre-recorded speech.

Maduro recalled that Venezuela has, on numerous occasions, “spoken out against the ferocious onslaught, the merciless campaign, waged against our country by the elites that have governed the United States, with the complicity of the elites at the helm of organizations in Europe and elsewhere.”

Maduro argued that the elites governing the U.S. and E.U. seek to “manipulate international organizations and international law in an attempt to justify their merciless campaign and criminal aggressions against the … people of Venezuela.”

“Venezuela again denounces a savage campaign — a permanent, systematic aggression — waged through economic, financial, cruel oil sanctions. A persecution of the right to economic freedom, violating the economic rights and guarantees to which all people are entitled,” he affirmed.

“Bank accounts are being targeted. Our gold, held in the legal international reserves of the Venezuelan central bank in London, has been seized. And billions of dollars held in bank accounts in the United States, Europe, and beyond have been frozen,” the leader detailed.

Maduro said the Western sanctions have precluded Venezuelan oil and mining companies from “selling their products and opening banking accounts to pay and receive money and to trade freely, as is provided for under international law.” He argued that this was an example of  “financial, monetary, [and] economic persecution, which is systematic, cruel, and criminal.”

The U.S. government imposed several sanctions against Venezuela under the administration of U.S. President Donald Trump in an effort to pressure its socialist leader, Maduro, out of power.

“Those restrictions have made it difficult for Venezuela to develop, sell or transport its oil — the backbone of its economy,” the Associated Press (AP) noted in July. 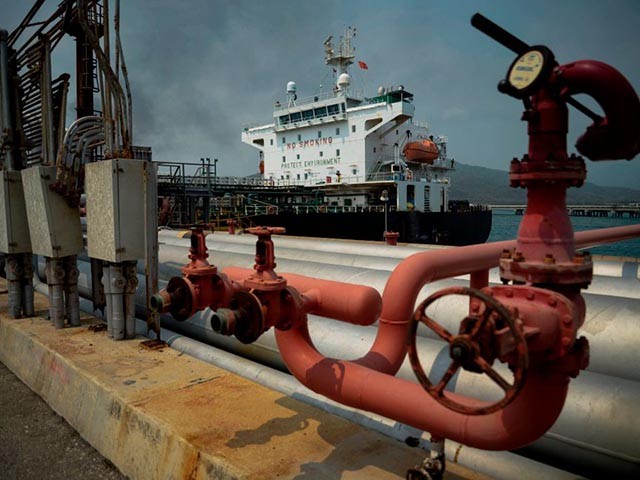 The Iranian-flagged oil tanker Fortune is docked at the El Palito refinery after its arrival to Puerto Cabello in the northern state of Carabobo, Venezuela, on May 25, 2020. – The first of five Iranian tankers carrying much-needed gasoline and oil derivatives docked in Venezuela on Monday, Caracas announced amid concern in Washington over the burgeoning relationship between countries it sees as international pariahs. (Photo by -/AFP via Getty Images)

Venezuela is home to the world’s largest oil reserves. Despite its unparalleled abundance of natural resources, the country has suffered from fuel shortages in recent years due to a complex overlay of mismanagement by its government and simultaneous sanctions imposed on its oil industry by Western political foes.

The administration of U.S. President Joe Biden temporarily eased a Venezuelan sanction on July 12 “allowing companies to export propane to the troubled South American country, a step that could mitigate a shortage that has pushed people to cook on charcoal or wood grills,” the AP reported at the time.

“It is obviously a humanitarian gesture to the Venezuelan government because in the country with the largest oil reserves in the world, people are cooking with wood on wood stoves instead of with propane,” Russ Dallen, the managing partner at Caracas Capital Markets, told the AP.

“Despite Monday’s move by the Biden administration, several stiff sanctions remain in place, keeping Venezuela in a stranglehold. The European Union has also imposed sanctions,” the news agency observed.

“A U.N. report issued last week noted that sanctions add to the problems in Venezuela, which is mired in a deep political, social and economic crisis attributed to plummeting oil prices and to two decades of mismanagement by socialist governments,” the AP recalled. “It has been in recession for years. Millions live in poverty amid high food prices, low wages and hyperinflation.”